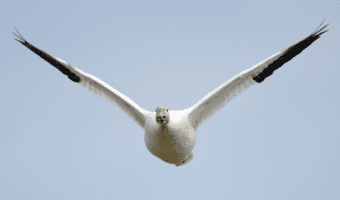 The snow goose (Anser caerulescens) is a species of goose native to North America. It breeds north of the timberline in Greenland, Canada, Alaska, and the northeastern tip of Siberia, and spend winters in warm parts of North America from southwestern British Columbia through parts of the United States to Mexico.

This bird belongs to the genus Anser and the family Anatidae. Both white and dark varieties of this goose exist, with the latter often known as blue goose. The name snow goose derives from the typically white plumage.

The snow goose feeds on roots, leaves and grasses, using their bills for digging up roots in thick mud. Their most common predators are artic foxes and gull-like birds called jaegers. They usually nest in colonies and travel in large flocks made of many family units.

The popualtion of the snow goose is increasing at an estimated rate of 130,000 birds per year. The cause of this may be the heavy conversion of land from forest and prairie to agricultural usage in the 20th century. They are currently listed as Least Concern on the IUCN Red List.

The snow goose belongs to the genus Anser, which includes the grey geese and the white geese. The snow goose was originally placed in the genus Chen. The scientific name for the species is from the Latin anser, “goose”, and caerulescens, “bluish”, derived from caeruleus, “dark blue”. The snow goose is the sister species to Ross’s goose (Anser rossii).

While the two color morphs of the snow goose were once thought to be separate species, they are now considered two color phases of the same species because they are found together throughout their ranges and interbreed. Because they interbreed, offspring may be of either morph. When young birds choose a mate, they will most often select a mate that resembles their parents’ coloring. If the birds were hatched into a mixed pair, they will mate with either color phase. 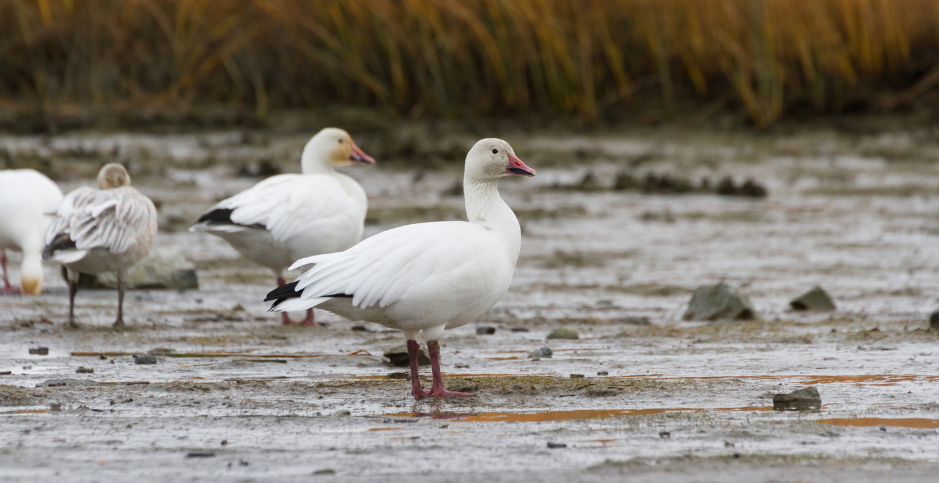 Male and female snow geese are similar in appearance although males are usually larger. These birds usually stand 63.5 to 78.7 cm tall and have a wing length between 135 to 165 cm (53 to 65 in). They weigh from 2 to 3 kg. The two subspecies of snow goose can be differentiated by their size — the lesser snow goose is smaller than the greater snow goose.

The snow goose has two color plumage morphs, white (snow) or gray/blue (blue), which gives the birds the common description of “snows” and “blues”. White snow geese are white except for black wing tips, while blue snow geese have a bluish-grey plumage all over, except for white on the head, neck and tail tip. Both morphs have rose-red feet and legs, and pink bills with black tomia (“cutting edges”), giving them a black “grin patch”.

The exact lifespan of the snow goose is unknown but it is believed they have quite long lifespans. They may live for up to 26 years.

In northern breeding grounds, their most common food source is American bulrush, but in the south during winter, they feed on the aquatic vegetation in wetlands and estuaries. They also hunt for food in agricultural fields, eating oats, corn and winter wheat.

To forage, they use their strong bills to dig up roots in thick mud. They also graze and shear plants off at ground level, or rip entire stems from the ground. 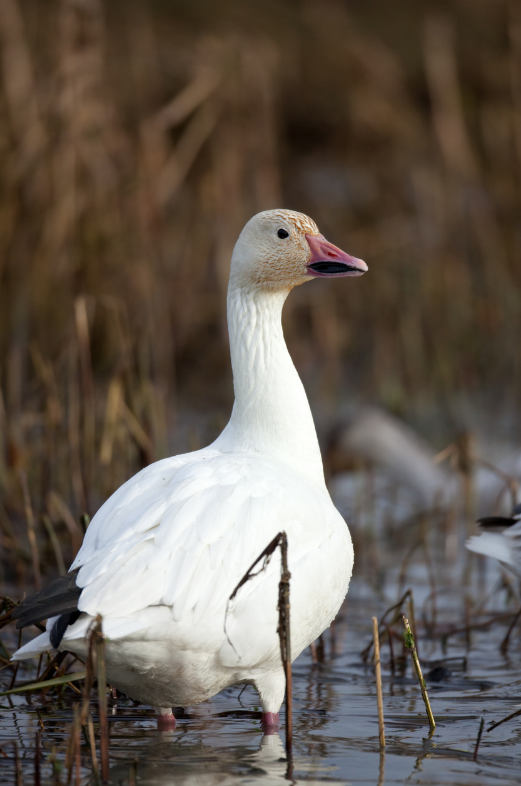 Snow geese are social animals that travel in large flocks made of many family units and fly during both night and day during migration. Snow geese frequently travel and feed alongside greater white-fronted geese.

They are strong fliers, walkers, and swimmers, and spend most of their time feeding and resting. They forage on foot and sleep while sitting, standing on one leg, or swimming.

The males are territorial toward other males, and the females toward other females. These animals are very vocal and can often be heard from more than a mile away. They are particularly known for their loud squawking and honking.

Snow geese breed from May to mid-August. They are monogamous, with long-term pairs forming in the second year, although breeding does not usually start until the third year. Snow geese most often nest in colonies and females are strongly philopatric, meaning they will return to the place they hatched to breed.

A female will select a nest site and build a nest on an area of high ground. The nest is lined with plant material and may be used year after year. The female will lay one egg a day until she reaches a full clutch of about 3 to 5. The eggs are incubated for 23 to 25 days while the male guards the nest and the mother. The hatched young are called goslings.

Goslings in the white phase have a body that is a dirty white in color with black wing tips, and in the immature blue phase they are a slate gray with little or no white. In both immature snow geese color phases they have red feet and legs but they are not as bright as the adult goose. Goslings may eat fruits, flowers, horsetail shoots, and fly larvae.

The young grow rapidly and are fully fledged within forty-five days, with females reaching sexual maturity between 2 and 4 years old. They remain with their family until this time.

The snow goose breeds north of the timberline in Greenland, Canada, Alaska, and the northeastern tip of Siberia. They reside in the vicinity of the coast, from the high arctic to the subarctic and prefer areas within 10 km of ponds, shallow lakes, coastal salt marshes, or streams.

Following the hatching of goslings, families move to brood-rearing territories with a lot of grasses and bryophytes, including tidal marshes and wet areas near ponds. In the winter, they prefer open habitats like marshes, grasslands, marine inlets, freshwater ponds, and agricultural fields.

Snow geese are a migratory species and spend more than half the year on their migration to-and-from warmer wintering areas. They can travel more than 3,000 mi (4,800 km). They leave their breeding grounds in September, and begin to arrive at the St. Lawrence River area in October and stay until early November when they continue to their American wintering grounds. Their main wintering grounds are along the gulf coast of Louisiana and Texas between the Mississippi delta and Corpus Christi, Texas. They leave their wintering grounds in March and head north over the New England states and over central Quebec, Canada. 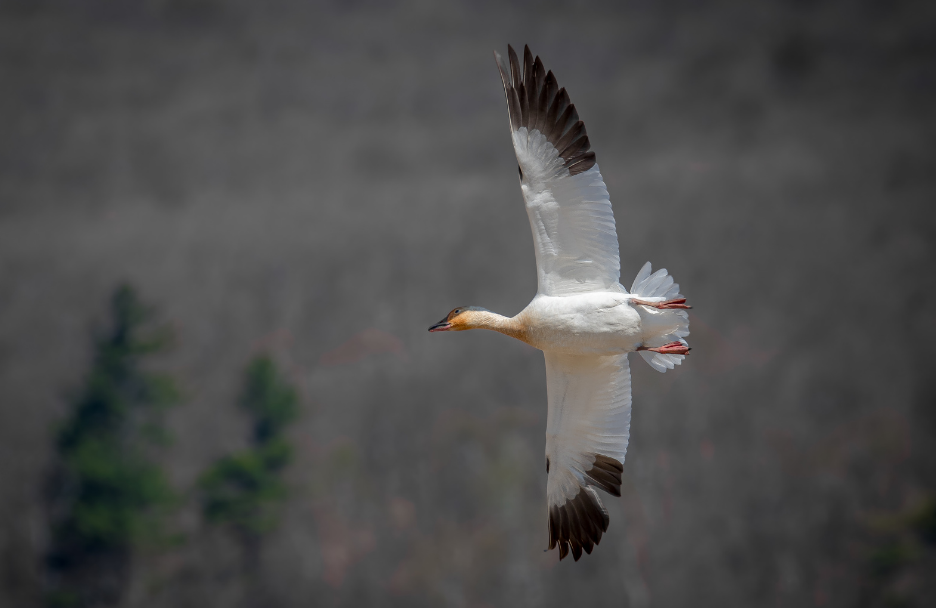 The snow goose is currently listed as Least Concern on the IUCN Red List. The population of greater snow geese was in decline at the beginning of the 20th century, but has now recovered to sustainable levels. In fact, these animals are considered to be overabundant in some areas. The breeding population of the lesser snow goose currently exceeds 5 million birds. Non-breeding geese (juveniles or adults that fail to nest successfully) are not included in this estimate, however, so the total number of geese is likely higher.

Snow geese in North America have increased to the point where the breeding areas and wintering grounds are both becoming severely degraded, which is affecting other species using the same habitat.

There have been periodic hunting seasons established to help curb the growing population. There are restrictions, however. About 400,000 Snow Geese are now hunted annually in the US and Canada.

The main predators of the snow goose are artic foxes, wolves, bears, bald eagles, or golden eagles. The biggest threat occurs is during the breeding season, in the first couple of weeks after the eggs are laid and then after hatching. During this time, the eggs and nestlings are at risk from arctic and red foxes, glaucous gulls, herring gulls, parasitic jaegers, caribou, polar bears and black bears, gray wolves, common ravens, long-tailed jaegers, and snowy owls.

Where does the snow goose live?

The snow goose lives in North America. Their breeding grounds are around Greenland, Canada and Alaska, but in the winter they travel south to warmer areas, such as Louisiana and Texas. They like to live close to water sources, like ponds, shallow lakes, coastal salt marshes, and streams.

What does the snow goose eat?

The snow goose is mainly herbivorous and eats roots, leaves, grasses. However, these birds will also eat aquatic invertebrates.

Is the snow goose white?

Some snow geese are white. However, a dark variety of this goose exists, and is often known as the blue goose. The two color morphs of the snow goose were once thought to be separate species, but they are now considered two color phases of the same species because they are found together throughout their ranges and interbreed.

How rare is the snow goose?

This goose is actually not that rare — in some areas, they are considered to be overabundant. While their population declined at the beginning of the 20th century, it has now recovered and the breeding population currently exceeds 5 million birds. However, unless you live in an area that the goose resides, they are a very rare sight!