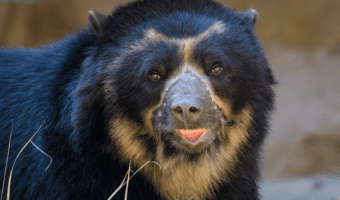 Spectacled Bears (Tremarctos ornatus) also known as the ‘Andean Bears’ are distributed in the Northern Andes Mountains including Colombia, Ecuador, Peru, Bolivia and into Chile. It is the only living bear species native to South America. The Spectacled Bear is the closest living kin of the short-faced bears of the Middle Pleistocene to Late Pleistocene age. 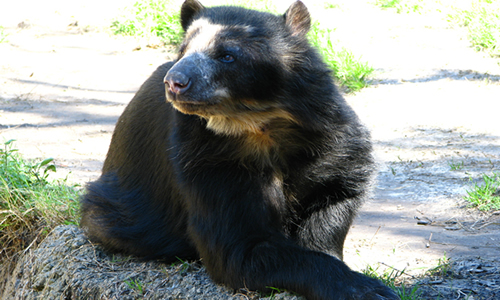 Spectacled Bears are generally smaller bears of the Ursidae family. Males are significantly larger than females (33% larger) and grow over 5 feet (1.5 metres) in length and weigh up to 340 pounds (154 kilograms). Females rarely weigh more than 180 pounds (82 kilograms).

Spectacled Bears are so named because of the large white circles or semicircles of white fur around their eyes giving them the appearance of wearing spectacles. The shaggy fur of the Spectacled Bear is black with beige sometimes red colored markings on its face and upper chest. Because of the warm climate where they live, their fur is reasonable thinner than most other bear species and they do not have to hibernate. All other types of bear have 14 pairs of ribs, however, the Spectacled Bear only has 13.

They have long, curved, sharp claws that are used for climbing and for digging into insect mounds such as ant hills and termite hills for food. Their front limbs are longer than their back limbs which helps them to climb trees more easily. Spectacled Bears have very strong jaws and wide, flat molars to help them chew through tough vegetation such as tree bark.

The Spectacled Bears preferred habitats are tropical mountain forests and alpine grasslands. They live mainly in the lush high altitude forests clothing the slopes of the Andes Mountains climbing as high as 14,000 feet (4,300 metres). The bears are much more numerous on the eastern side of the Andes, where they are less vulnerable to human colonization. The bears come down from the mountains only in search for food and have been observed on coastal deserts and steppe lands.

These bears are primarily herbivores but are generally classed as omnivores. They mainly travel through forests collecting ripe fruit, berries, cacti and honey. During periods when ripe fruit is not available, they will also feed upon bamboo hearts, corn and epiphytes – plants that grow on other plants called bromeliads. Occasionally, they will supplement their diet with insects, rodents and birds. On average, only around 7% of the bears diet is carnivorous. 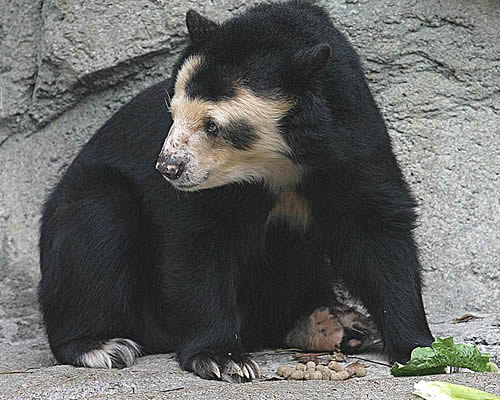 Spectacled Bears are nocturnal and are mainly active at night especially during the twilight hours. During the day, they shelter in caves, under tree roots or on tree trunks. They are arboreal creatures and expert climbers and spend a great deal of time foraging in trees. Their survival is highly dependant on the ability to climb even the tallest trees of the Andes forests.

Once the bears are up in the trees, they often build feeding platforms from broken branches. The bears use these platforms to reach for more food.

Spectacled Bears are not territorial, however, they do tend to isolate themselves from others in order to avoid competition. If they do encounter other bear or even a human, these shy bears react in a docile but cautious manner. However, they will attack if they feel threatened or a mothers cubs are in danger, like other bears, mother bears are very protective of their young.

Spectacled Bears are also solitary animals and are normally only seen together during the mating season. Because they are solitary animals, these bears are usually very silent creatures. It is only when they do encounter another bear that they can be very vocal.

Being a tropical species of bear, breeding takes place all year round but mainly April to June. Spectacled Bears reach maturity and begin to breed between the age of 4 and 7 years.

Female Spectacle Bears give birth to 1 – 2 cubs every 2 – 3 years. Gestation period is 6 – 7 months. Breeding pairs stay together for a few weeks after mating occurs. The female is capable of planning her pregnancy and birth by making sure the birth occurs about 90 days prior to the peak of the fruit season so food supplies are ample. If a season occurs where food supplies are scarce, the female bear can delay implantation whereby the embryos can simply be absorbed into the mothers body and she will not give birth that year.

The female bear will construct a ‘den’ prior to giving birth. Cubs weigh 10 – 18 ounces at birth and are helpless and their eyes remain closed for the first month. The cubs will stay with their mother for at least 2 years, riding on her back when they are small, before being chased away by adult males seeking to mate with the female.

The life span of the Spectacled Bear can be 25 years in the wild and 36 years in captivity.

Spectacled Bears are listed as vulnerable on the World Conservation Union’s Red List of Threatened Species. The population of Spectacled Bears is under threat for a number of reasons. They are hunted by locals who believe they will eat their livestock, even though these bears do not eat large amounts of meat. Extensive farming and logging have led to habitat loss. The Spectacled Bears gall bladder is valued in Oriental medicines, so they are hunted for this reason also. Some estimates suggest that there are only around 3,000 Spectacled Bears surviving in the wild today.

Each bears spectacle pattern is different.Paddington bear is the most famous of these bears.The markings on a Spectacled Bears face, nock and chest are like human fingerprints, unique to each bear.