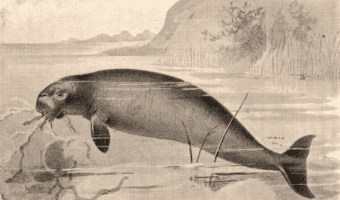 Stellers sea cow (Hydrodamalis gigas) is a an extinct sirenian described by Georg Wilhelm Steller in 1741. Most of what we know about Steller’s sea cow comes from Steller’s observations. It belonged to the order Sirenia and the family Dugongidae, of which the dugong (Dugong dugon) is the sole living member. The other living members of the order Sirenia are three species of manatee, which are often called sea cows, but are a different species to Steller’s.

The sea cow was found only around the Commander Islands in the Bering Sea between Alaska and Russia, and would have reached weights of 8 to 10 t (8.8 to 11.0 short tons) and lengths up to 9 m (30 ft). It had a forked tail, like those of whales or dugongs, and fed mainly on kelp.

Stellers sea cow became extinct in the 18th century and was hunted to extinction for its meat, fat, and hide. It was a very slow-moving animal, meaning it was easy to catch and was therefore extinct within 27 years of its discovery.

Stellers sea cows are thought to have been much larger than extant sirenians, measuring between 8 and 9 m (26 and 30 ft) long and weighing between 8 to 10 t (8.8 to 11.0 short tons) based on skeletons found and Steller’s description. This size would have made the sea cow one of the largest mammals of the Holocene epoch, along with whales.

The head and neck of the sea cow was small and short in comparison to its huge body. It had a large and broad upper lip, with a mouth underneath the skull, and its snout pointed downwards, which allowed it to grasp kelp a lot better. It was toothless and had interlacing white bristles on its upper lip, about 3.8 cm (1.5 in) in length, which were used to tear its food instead of teeth. Its tongue was small and remained in the back of the mouth

The sea cow also had small eyes located halfway between its nostrils and ears with black irises, livid eyeballs, and canthi which were not externally visible. The nostrils of this animal were roughly 5 cm (2 in) long and wide. It had fore limbs approximately 67 cm (26 in) long and a forked tail fluke. It spine had seven cervical (neck) vertebrae, 17 thoracic vertebrae, three lumbar vertebrae, and 34 caudal (tail) vertebrae.

Stellers sea cow had a very thick outer skin, 2.5 cm (1 in), to prevent injury from sharp rocks and ice, and was buoyant, meaning it could completely submerge itself. The blubber was a further 8 to 10 cm (3 to 4 in) thick, to help keep the sea cow warm in the icy water. Its skin was smooth along its back and rough on its sides, and brownish-black in color.

The lifespan of the extinct Steller’s sea cow is unknown.

Sea cows were herbivores and actually considered to be algivores, as their main source of food was kelp. It is probable they fed on many different types of kelp. However, they fed only on the soft parts of the plant, which meant that the tougher part often turned up washed up on the shore. It is thought Steller’s sea cow also fed on seagrass, but not as much as kelp.

Sea cows were highly social, living in small family groups. These animals were monogamous, with mothers fiercely protecting their young and males defending their females. Steller reported that as a female was being captured, a group of other sea cows attacked the hunting boat by ramming it, and after the hunt, her mate followed the boat to shore, even after the captured animal had died.

Herds of these marine mammals would often congregate in shallow waters near the shore, sometimes so close that hunters could simply wade out to them. They were also often found near the mouths of stream or rivers, which suggests they could not tolerate drinking marine water.

Steller’s sea cow spent most of the day feeding, only lifting its head every 4 to 5 minutes for breathing. Because of its buoyancy, it is thought the sea cow only had access to food no deeper than 1 m (3.3 ft) below the tide. Steller also noted that the sea cow grew thin during winter, which may have indicated a period of fasting when there was low kelp growth.

The sea cow was a slow moving animal that, during grazing, swam by moving its tail from side to side. They used their fore limbs for swimming, feeding, walking in shallow water, and for defending itself. After feeding, they slept on their backs.

These aquatic mammals were not very vocal. They only made heavy breathing sounds, raspy snorting similar to a horse, and sighs.

There is little known about the Steller’s sea cow reproduction habits. We know they were monogamous and it is thought their mating season was around the early spring, with most calves born in the autumn. Despite this, offspring were observed to be born all year round.

The litter size was one calf, and their gestation period was over a year long. Both parents exhibited parental care towards the calves.

Stellers sea cow was thought to inhabit the North Pacific Ocean, however their range was limited to the coastal waters of the Komandorskiye and Blizhnie Islands in the Bering Sea. Despite this, fossils have been found as far south as the southern coast of California.

These animals were found mostly in cold, shallow, coastal marine waters rich in algae and sea grass. Herds could also be found near the mouths of streams or freshwater rivers. 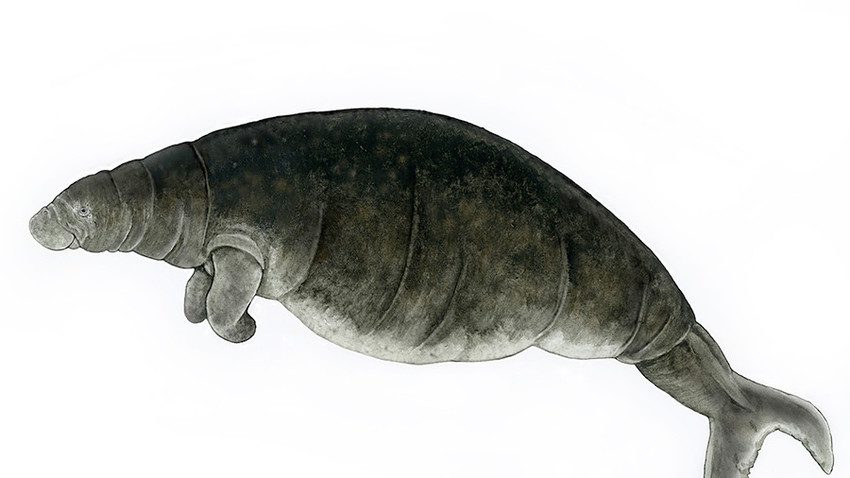 It is not known when Stellers sea cow became extinct, but it is thought the last individual had died out by 1768. The main reason for their extinction was hunting by humans, with almost all of the animal being used for something.

Their meat was said to have tasted similar to corned beef, though it was tougher, redder, and needed to be cooked longer. It was abundant on the animal, and slow to spoil, too. The fat could be used for cooking and as an odorless lamp oil, and the milk from females could be drunk or made into butter. Their leathery hide was also used to make clothing such as shoes and belts.

Often, because sea cows would gather in shallow areas, hunters would simply wade out to an individual, spear it, and then allow the animal to swim off, hoping that it would later die and drift to shore. The hardest part of hunting these animals was getting them back to the shore because they were so heavy.

The natural predators of Stellers sea cow, and whether it actually had any, are unknown. However, it has been guessed that these animals were probably hunted by killer whales and sharks. That being said, the buoyancy of the sea cow would have made it difficult for a killer whale to kill, and the kelp forests in which the sea cow lived may have deterred sharks from going near them.