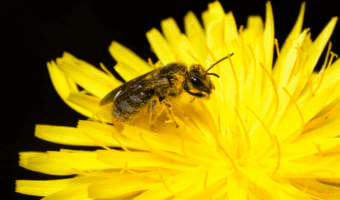 Stingless bees are a large group of bees, comprising the tribe Meliponini (sometimes called stingless honey bees) in the family Apidae. They are closely related to the common honey bees, carpenter bees, orchid bees and bumblebees.

The common name is slightly misleading, as a great many bee species, especially in the family Andrenidae, are incapable of stinging.

Stingless bees can be found in most tropical or subtropical regions of the world, such as Australia, Africa, Southeast Asia and parts of Mexico and Brazil. The majority of native eusocial bees of Central and South America are stingless bees, although only a few of them produce honey on a scale such that they are farmed by humans.

Stingless bees are also quite diverse in Africa and are also farmed there. Stingless bee honey is prized as a medicine in many African communities.

Stingless bees are active all year round, although they are less active in cooler weather. Unlike other eusocial bees, they do not sting but will defend by biting if their nest is disturbed. Despite being unable to sting, stingless bees may have very large colonies made formidable by way of numerous defenders.

Stingless bees usually nest in hollow trunks, tree branches, or rock crevices but they have also been encountered in wall cavities, old rubbish bins, water metres and storage drums. Many beekeepers keep the bees in their original log hive or transfer them to a wooden box, as this makes it easier to control the hive.

These pots are often arranged around a central set of horizontal brood combs, where the larval bees are housed. When the young worker bees emerge from their cells, they tend to remain inside the hive, performing different jobs. As workers age, they become guards or foragers.

Unlike honey bees, stingless bee larvae are not fed directly. The pollen and nectar are placed in a cell, an egg is laid, and the cell is sealed until the adult bee emerges after pupation (‘mass provisioning’). At any one time, hives can contain anywhere from 300 – 80,000 workers, depending on species.

Unlike true honey bees, whose female bees may become workers or queens strictly depending on what kind of food they receive as larvae (queens are fed royal jelly and workers are fed pollen), the caste system is commonly based simply on the amount of pollen consumed.

As stingless bees are harmless to humans, they have become an increasingly attractive addition to the suburban backyard. Most stingless beekeepers do not keep the bees for honey but rather for the pleasure of conserving a native species whose original habitat is declining due to human development. In return, the bees pollinate crops, garden flowers and bushland during their search for nectar and pollen.

In warm areas of Australia, these bees can be used for minor honey production. They may also be kept successfully in boxes in these areas. Special methods are being developed to harvest moderate amounts of honey from stingless bees in these areas without causing harm.

Stingless bees also collect nectar, which they store in an extension of their gut called a crop. Back at the hive, the bees ripen or dehydrate the nectar droplets by spinning them inside their mouthparts until honey is formed. Ripening concentrates the nectar and increases the sugar content, though it is not nearly as concentrated as the honey from true honeybees. It is much thinner in consistency and more prone to spoiling.

Unlike a hive of commercial honeybees, which can produce 75 kilograms of honey a year, a hive of stingless bees produces less than one kilogram. Stingless Bees produce a different tasting honey which is a mix of sweet and sour with a hint of lemon. The taste comes from plant resins which the bees use to build their hives and honey pots and varies depending on the flowers and trees visited.

Australian farmers rely heavily on the introduced Western honey bee to pollinate their crops. However, for some crops native bees may be better pollinators. Stingless bees have been shown to be valuable pollinators of crops such as macadamias and mangoes. They may also benefit strawberries, watermelons, citrus, avocados, lychees and many others.

Research into the use of stingless bees for crop pollination in Australia is still in its very early stages, but these bees show great potential.

Native Americans previously and still do keep these bees as pets.