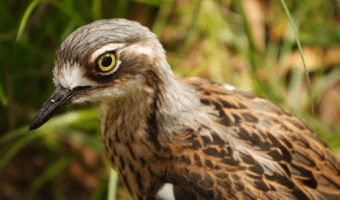 The Stone Curlew bird (Burhinus oedicnemus) is also known as the Eurasian Thick-Knee. The Stone Curlew is said to be the northern representative of the ‘Stone-curlews’ which are large waders in the family Burhinidae. Stone Curlews of the Indian race are sometimes considered a separate species ‘Burhinus indicus’.

The specific name ‘Oedicnemus’ derives from the Greek for ‘swollen shinned’, these birds are also known as ‘thick knees’ due to their large heavy looking legs. Other local names include ‘Norfolk plover’ and ‘Goggle eyes’.

Stone Curlews are easy to identify by their streaky sandy-brown plumage that provides excellent camouflage against sandy soils during the day when they are mainly inactive. They are a long-bodied, long-tailed shape with a broad white bar across the folded wing. However, their most prominent characteristic is their eye which is flanked by a puffy white ‘bag’ underneath and a bold white eyebrow above. 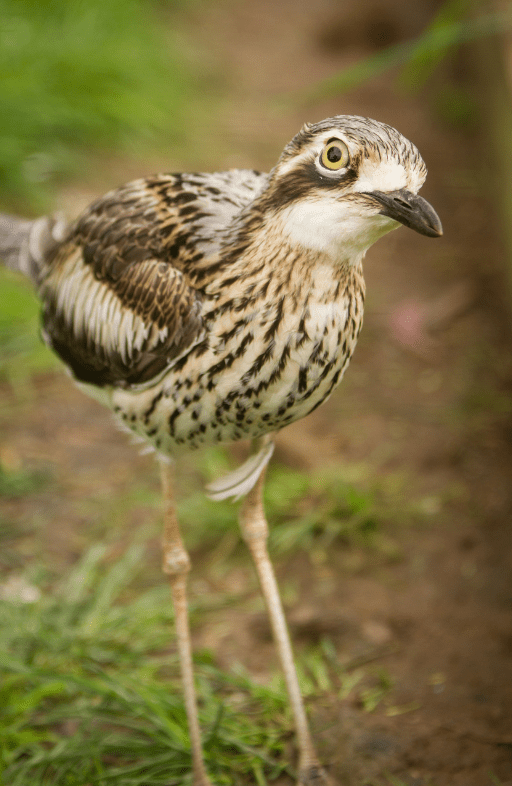 In flight, narrow black and white bars on their long wings are visible. They have long yellow legs, a short yellow beak with a black tip and large eyes. The species is not related to the curlew, the common name comes from the stone curlews repeated ‘kur-lee’ call.

The Stone Curlew is a rare summer visitor between March and October to the Breckland area of East Anglia and Salisbury Plain. The best site to see this rare species without causing disturbance is from the hides at the Norfolk Wildlife Trust Reserve of Weeting Heath, just north of Brandon. Occasional birds are sometimes seen on migration passages, usually around the coast.

Stone Curlews are present in areas of plains throughout central and southern Europe, however, despite being locally numerous, they are often difficult to locate except by their wailing nocturnal calls. They are often easier to spot around the drying edges of wetlands such as Porto Lagos in Greece and the Kalloni saltpans on Lesbos where small flocks gather in late summer.