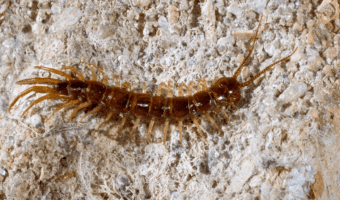 The shiny brown centipedes that scuttle away when stones and logs are turned over nearly all belong to the group known as ‘lithobiids’ or ‘stone dwellers’. These stone dwelling centipedes are much broader than the average centipedes, their legs are much longer and they can run much faster.

The Stone Dwelling centipede has a more circular head which has a number of simple eyes. These are darkly pigmented and when they are numerous, they form a dark patch on each side of their head.

Their antennae are quite long, usually at least one third of the length of the body. The Stone Dwelling centipedes are well adapted for life on the surface of the ground and, although they may burrow into the soil during the winter, they are less commonly found in the soil than the ‘Ground centipedes‘.

The Stone Dwelling centipede has a much stouter and less flexible body and therefore less suitable for tunneling activities.

Adult stone-dwellers always have 15 trunk segments and 15 pairs of legs, and there is a distinguished mark between their segments on the upper surface their body.

The plates on the underside are all more or less alike, and so the joints on the upper and lower surfaces are not all in line. This makes for rigidity. When the animals are moving at speed, the thrust and leverage caused by their long legs tend to throw the body into curves.

A slight flexing is still noticeable when the centipede runs at speed, but without the staggering of the plates, the body would become hopelessly contorted and the legs would become thoroughly tangled. Like other centipedes, they are more active at night. They feed on insects and other small invertebrates.

Female Stone Dwelling centipedes are easily recognisable from males by their much larger, claw-like gonopods protruding from the body between the hind legs.

The female uses her gonopods to hold her eggs while she coats them with mucus and with particles of soil. She then abandons the eggs one by one on the ground or among leaves.

Unlike the ground-loving centipede babies, young stone-dweller centipedes do not have a full set of legs when they hatch.

The newly hatched centipede has only seven pairs of legs and seven fully developed trunk segments. More legs and trunk segments appear after each molt and after four molts the centipede is fully equipped with its 15 pairs of legs. It has to undergo several more skin changes however, and the larger species may not reach full maturity until they are about 2 years old. If they escape their enemies, they may live 5 or 6 years.