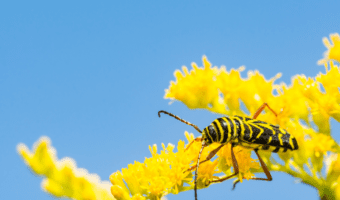 The Sugar Maple Borer beetle, Glycobius speciosus, is a long-horned wood boring beetle. The adult sugar maple borer is an attractive black and yellow beetle about 25 millimetres in length. This beetle has a prominent ‘W’ design that appears on the elytra (wing covers). Although it resembles the much more common locust borer, the sugar maple borer can be distinguished by its yellow legs and two black dots near the end of the wing covers (the locust borer has reddish-brown legs and no dots).

Sugar maple borer beetle eggs are white and about 3 millimetres in length. Their larvae are robust and are dirty white in color with brownish chewing mouthparts.

Pupae, which are ‘J’ shaped, develop deep within wood and are rarely seen. 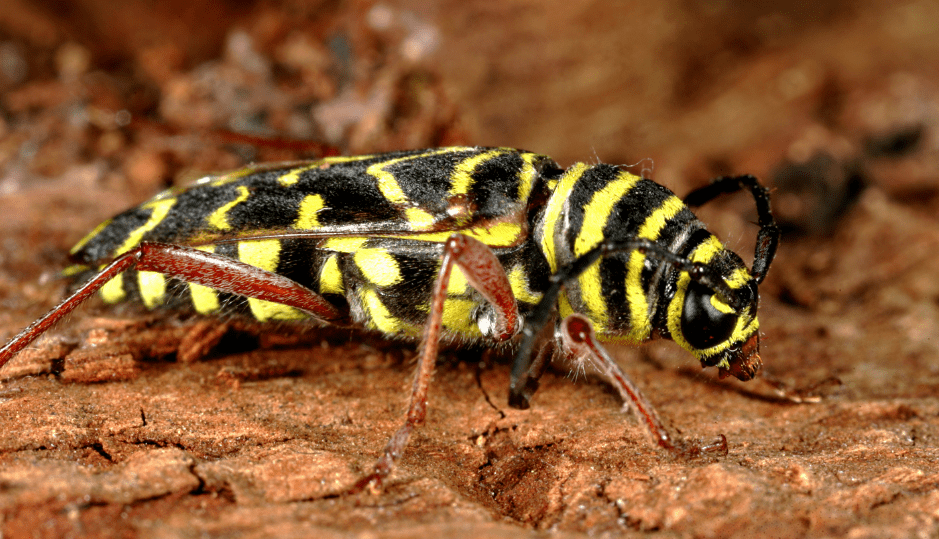 The sugar maple borer has a two-year life cycle. Most eggs are laid in midsummer in roughened bark locations, usually in cracks, under bark scales. After hatching, the larvae makes a mine beneath the bark. Mining continues until early autumn when it excavates a shallow cell in the sapwood. Here it spends the winter. The following spring, the larvae resumes mining, etching a deep groove in the sapwood. The mine partially encircles the bole or branch as it spirals upward.

With the coming of winter, the second-year larvae bores a J-shaped tunnel deep into the wood. In the tunnels far end, the larvae forms a chamber in which to spend the winter. Before spring pupation, the larvae chews a hole to the outside through which it will emerge as an adult in June or July.

The sugar maple borer is a common pest of sugar maple (the only known host) throughout the range of the tree. Although borer-caused mortality is rare, infestations lead to value loss through lumber defect caused by larval galleries, discoloration, decay, and twisted grain.