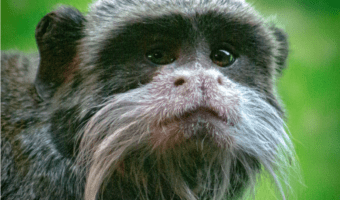 Tamarin Monkeys, are small monkeys of the family Callitrichidae. They are new-world monkeys, roughly the size of a squirrel. There are many variants however, and we will look at some of these below.

The Black Lion Tamarin Monkey (Leontopithecus chrysopygus) also known as the Golden-rumped Lion Tamarin is a lion tamarin found only in the Brazilian states of São Paulo and Paraná, almost exclusively at the Morro do Diabo State Park.

The Black Lion Tamarin Monkey lives in secondary and primary forests along its restricted range. The squirrel-sized black lion tamarin is one of the worlds most endangered mammals.

The Black Lion Tamarin Monkey has glossy black fur with varying amounts of reddish-golden fur on the rump, thighs and base of the tail.

The long mane framing the face is black. Like the closely related golden lion tamarin, the black lion tamarin has long digits that are used to forage for small insects. Conservation status – Critically Endangered.

The Golden Lion Tamarin Monkey (Leontopithecus rosalia) also known as Golden Marmoset, is a member of the family Cebidae.

Native to the Atlantic coastal forests of Brazil, the Golden Lion Tamarin Monkey is an endangered species and among the rarest animals in the world, with an estimated wild population of 1,000 individuals and a captive population of approximately 500. 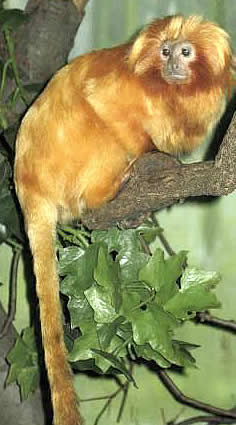 The Golden Lion Tamarin Monkey is reddish orange to golden brown in color. Its hair is longer and darker around the face, forming a mane on top of the head and on the cheeks and throat.

Its limbs are slender with sharp claws. Although quite long, its tail is not prehensile.

The Golden Lion Tamarin Monkeys body measures up to 335 millimetres (13 inches) in length and its tail up to 400 millimetres (15 inches). The Golden Lion Tamarin male reaches a maximum weight of just 700 grams (1.5 pounds) in the wild though higher weights can be found in captivity. The pregnant female may weigh up to 790 grams (1.8 pounds) however, a non-gestating female typically weighs closer to 550 grams (1.1 pounds).

Most of the wild population is confined to the Reserva Biológica de Poço das Antas, a protected area of swampy forests in the state of Rio de Janeiro. Because its existing habitat has been broken up by logging and agriculture it has led to isolated populations and inbreeding, a combination likely to result in extinction.

These omnivorous monkeys rely on rainwater and insects for their diet. Fruit is also eaten. The Golden Lion Tamarin is diurnal and primarily arboreal, forming small groups of up to fourteen individuals, led by a breeding pair; occasionally two unrelated males may be involved, but only one typically mates with the lead female. By night, the tamarins sleep in abandoned nesting holes in trees, or in large bromeliads (a large family of flowering plants native to the tropical and warm temperate New World). The group is cooperative in the rearing of young however, only the dominant female usually breeds.

The Golden Lion Tamarin is able to breed at 18 months of age. The breeding season is from September to March. Gestation lasts for 126 – 130 days, usually ending in twin births. The young tamarins are weaned after just 90 days, less than half of infants survive their first year of life. If they do, a life span of 8 – 15 years can be expected. Conservation status – Endangered.

The four species of Lion Tamarin Monkeys (Leontopithecus makikina) that make up the genus Leontopithecus. They are small New World monkeys named for the mane surrounding their face. Living in the eastern rainforests of Brazil, like all other callitrichines, they are arboreal.

Lion Tamarin Monkeys jump through trees using their fingers to hold onto branches and their claws to dig under the bark to search for insects to eat.

Lion Tamarin Monkeys tend to live in family groups, with both parents sharing different tasks of child-rearing the yearly twins.

The mother nurses her young every 2 to 3 hours and the father carries the infants on his back. Being diurnal tree-dwellers, Lion Tamarin Monkeys sleep in tree cavities at night and also seek shelter during the hottest part of the day. Conservation status – Least Concern.

The Emperor Tamarin Monkey (Saguinus imperator) lives in the southwest Amazon Basin, in east Peru, north Bolivia and in the west Brazilian states of Acre and Amazonas. The fur of the Emperor Tamarin is grey colored, with yellowish speckles on its chest. The hands and feet are black and the tail is brown. Outstanding is its long, white mustache, which extends to both sides beyond the shoulders. 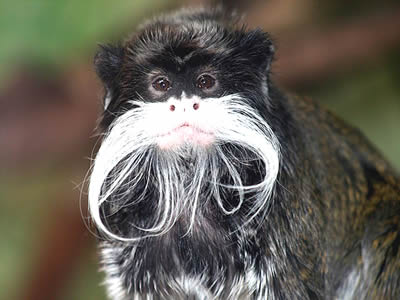 The Emperor Tamarin live together in groups of between 2 to 8 individuals. The oldest female leads the group above several mature males. The mutual grooming plays an important role for bonding and socializing. The diet of the Emperor Tamarin is similar to that of other tamarins.

The Emperor Tamarin Monkey is an omnivore, primarily eating fruits, insects and sap. It also eats bird eggs and small vertebrates (such as tree frogs). Due to its small weight it can reach food at the far end of branches, which are not accessible to heavier animals.

Gestation period is 140 to 145 days and births are typically twins (although triplets happen on occasion) as is typical of tamarins. All the males help with the birth, care and support the young, carrying them and bringing them to the mother to nurse. At approximately 3 months they are weaned and towards end of the second year they are fully mature. The Emperor Tamarin Monkeys life span is over 15 years. Conservation status – Least Concern. 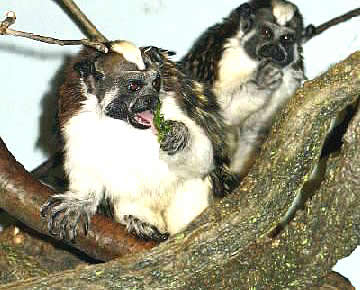 Geoffroy’s Tamarin Monkey (Saguinus geoffroyi), also known as the Panamanian or Rufous-naped Tamarin, is a black and white tamarin with a reddish nape. It is found from Costa Rica to Colombia. Geoffroy’s Tamarin Monkey is arboreal, it tends to live in areas of secondary growth or mixed forest. As a species it may become endangered, mainly because of habitat loss, however, it is abundant in a few areas particularly in Panama.

There is no difference in size or appearance between males and females. In captivity, Geoffroy’s Tamarin Monkey can live for up to 13 years. As with other Tamarin Monkeys, males contribute heavily to parental care and it is likely that some groups are polyandrous (forming a union with more than one male). Conservation status – Least Concern. 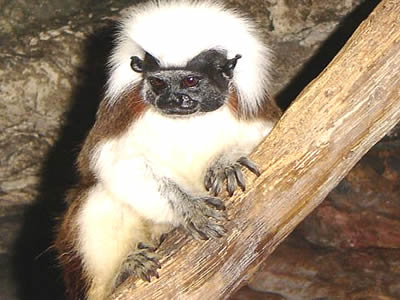 Cottontop Tamarin Monkeys are most active from sunrise to sunset, they spend a large portion of their activity time foraging for animal prey, searching through leaves and along branches and peering and reaching into holes and crevices in branches and tree trunks. When alarmed or excited, Cottontop Tamarins raise the hair on the crown of their head and stand up tall to make themselves look larger.

The Cottontop Tamarin eats fruit, insects, new leaves or buds, small lizards and nectar. Cottontop Tamarin groups usually include 3 – 9 individuals. Group members are not necessarily all related. Like most tamarins, the Cottontop Tamarin usually gives birth to twins, although single births and triplets happen occasionally. Tamarins reproduce year round with a gestation of 183 days. Both parents care for the young. Males and juveniles usually carry the young, giving them to the females for nursing. Weaning begins at 4 to 5 weeks and youngsters reach sexual maturity at 12 to 15 months. Currently, deforestation is the greatest threat. Conservation status – Endangered.

The Moustached Tamarin Monkey is distributed in tropical forests of Brazil and Peru.

There are two subspecies of the Moustached Tamarin: 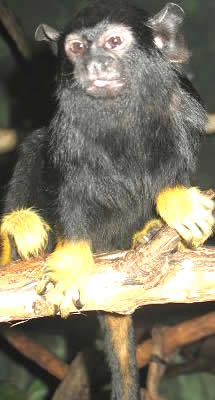 Red-handed Tamarin Monkeys live in groups of 4 to 15 members with little competition among a group even between breeding males.

Only one female among a group will breed during breeding season with the other females suppressing the instinct. The gestation period is 140 – 170 days and mothers typically give birth to 2 offspring.

Young tamarins are cared for primarily by the father and turned over to the mother only to nurse, however the entire group helps with the care of the young.

Defence is a priority in a group and when one tamarin is threatened the others will rush to its defence. The Red-handed Tamarin Monkey is territorial and can be aggressive, with sharp canines and claws instead of fingernails on all fingers and all but the large toe.

The Red-handed Tamarin is an exceptional climber and spends most of its time among the vines and branches of the trees. Red-handed Tamarin Monkeys are quick and agile and are superb jumpers known to jump distances of over 60 feet from a tree to the ground with no sign of injury. 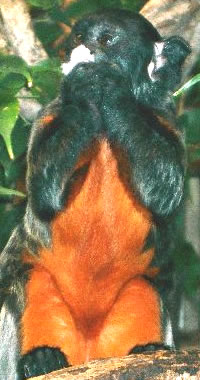 The White-lipped Tamarin Monkey (Saguinus labiatus), also known as the Red-bellied Tamarin is a tamarin which lives in the Amazon area of Brazil and Bolivia.

The red belly of the White-lipped Tamarin Monkey is its most remarkable outward characteristic. Otherwise it is black with a thin white mustache on its face and a black-brown back.

White-lipped Tamarin Monkeys live in social groups of related animals. The mother usually gives birth to one or two young at a time. The father carries the babies most of the time, however, siblings will also share the carrying of youngsters and so learn how to be good carers. Conservation status – Least Concern.

The Golden-headed Lion Tamarin Monkey (Leontopithecus chrysomelas) is a lion tamarin, and just like the others, also endemic to Brazil. It is found only in the lowland and premontane tropical forest fragments in the state of Bahia and therefore, it is considered to be an endangered species. Conservation status – Endangered.