You are here: Home / Animals / Tapir 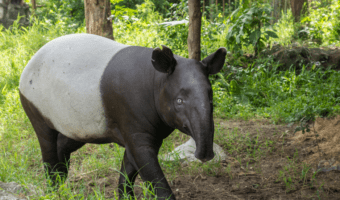 The Tapir is a large pig-like, browsing mammal that belongs to the family: Tairidae. Tapirs are odd-toes ungulate animals that can be found in the rainforests of South and Central America and Southeast Asia. There are 4 living species of Tapir of which three are native to the American rainforests and one native to the Asian rainforests.

Tapirs are related to Rhinoceroses and Horses. Male Tapirs are called ‘Bulls’, females are called ‘Cows’ and a baby tapir is a ‘Calf’. The name for a group of Tapirs is called a ‘Candle’.

Tapirs coats are short and can range in color from reddish brown to black, with the Malayan Tapir being the only subspecies to have a white saddle-shaped marking on its back which may help it to camouflage in dimly lit forest undergrowth and the Mountain Tapir having a more woolly fur covering.

Tapirs have thick-set bodies with short legs, a protruding rump and a short, stubby tail. Their hooves are splayed and have four toes on the front and three on the back which helps them to walk on muddy, soft ground. Their sensitive ears are rounded and white tipped and their brown eyes are small and often have a bluish cast to them identified as corneal cloudiness which gives them impaired vision, however, their strong sense of smell helps to compensate for this deficiency. Tapirs have an elongated, flexible snout/proboscis which they use to grab branches and other foilage which may otherwise be out of reach. Female Tapirs have a pair of single mammary glands with which they suckle their young. 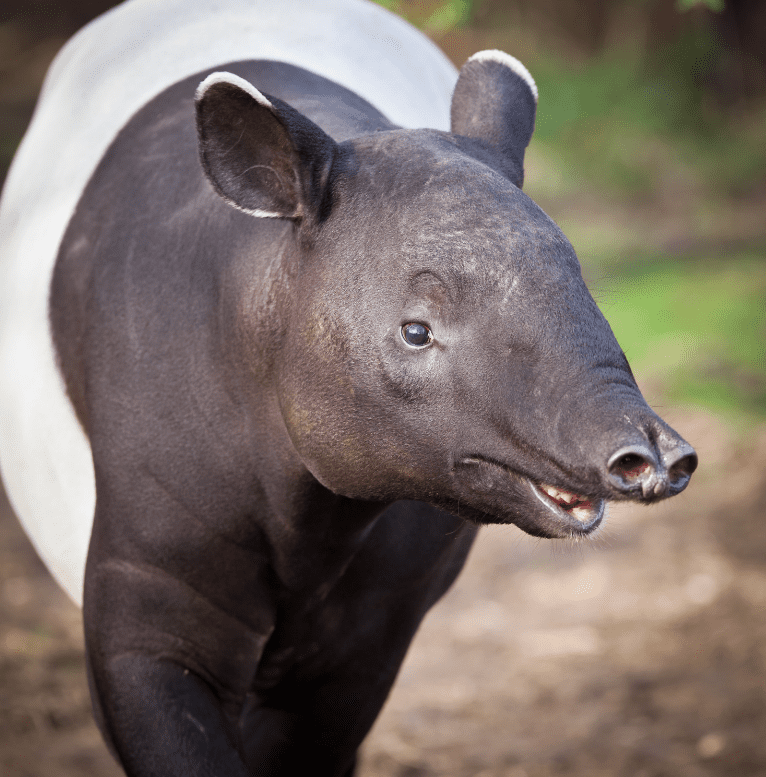 Tapirs are nocturnal and crepuscular animals except the Mountain Tapir which is more diurnal, active during the day. Tapirs spend most of their day underwater, using their snouts like snorkels, to keep cool in their hot forest environment and also to avoid predators.

Tapirs are surprisingly agile swimmers given their size. Tapirs are also able to sink to the riverbed and walk along the bottom, just like rhinos can. When submerged, they allow small fish to pick parasites of their bodies. Tapirs will also wallow in mud during the day which helps them keep cool and eliminates insects from their skin.

Tapirs are agile climbers, clambering up steep hillsides and river banks with apparent ease. During the night, tapirs emerge into more open country where they browse on vegetation and will follow one of several well-trodden trails to a favourite watering hole.

Tapirs are solitary animals who spend most of their time alone except for females and their young. Because of their solitary lifestyles, tapirs can become aggressive towards each other on chance meetings. In order to avoid these chance meetings, tapirs mark their grounds with urine and alert each other of their presence by making loud vocalizations including high-pitched squeaks, shrills and whistles.

Tapirs have very few natural predators because they are large animals and the thick skin on their necks makes it more difficult for a predator to grasp the animal. Most threats come from large cats such as Jaguars and Tigers, also snakes such as the Anaconda and Crocodiles when in water. Tapirs can also run rather quickly despite their size and are able to quickly find safety in the thick undergrowths of the forests or in water. When faced with a predator, a Tapir is able to defend itself using its strong jaws and sharp teeth.

Tapirs preferred habitats are woodlands and dense grassy areas with a close water source such as lake or river. Old growth forests are also favoured because of the food sources found within them.

Tapirs are herbivores that feed up on water plants, fruits and buds. These mammals will also eat twigs and leaves. They use their long snouts to forage along the ground in search of food. Tapirs have been known to consume up to 40 kilograms (85 pounds) of vegetation in one day. 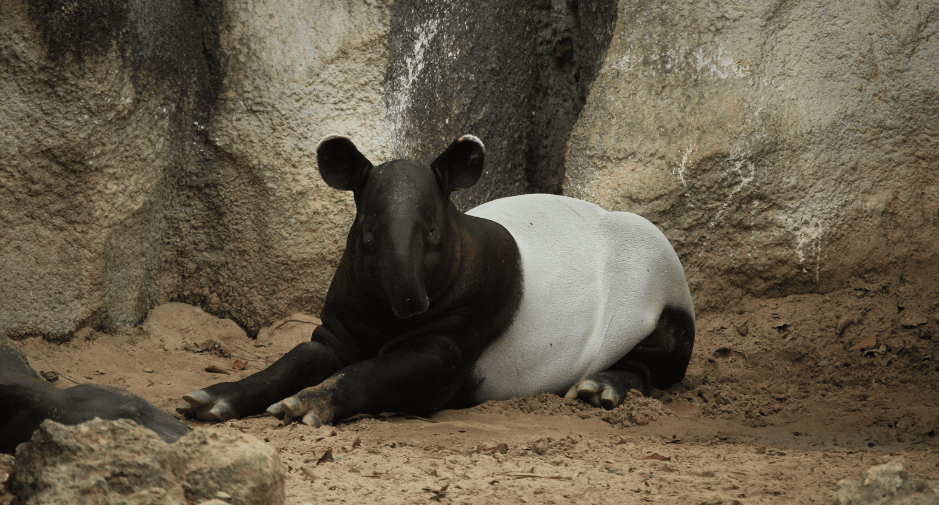 Tapirs mate all year round but mostly during the rainy season. Young are born just before the rains begin in the following year. Mating can take place either in or out of the water. Breeding pairs will mate several times while the female is in estrous. After a gestation period of around 13 months, the female tapir gives birth to a single young.

A healthy female tapir can give birth every 2 years. Young tapirs such as the Brazilian Tapir often have reddish/brown coats that are striped and flecked with white. This pattern provides them with camouflage in the dappled forest shade.

Their hair will turn black as they develop, usually around 4 – 7 months. The young tapirs are weaned between 6 – 8 months at which time they are nearly fully grown. Tapirs reach sexual maturity at between 3 – 4 years old with females reaching maturity earlier than males. The life span of a tapir is up to 35 years in the wild.

Tapirs have considerably reduced in numbers due to hunting for their meat and hide. Habitat loss is also a major threat to the tapir. The Brazilian Tapir and the Malayan Tapir are now classed as ‘Vulnerable’.

The Tapir Specialist Group are currently striving to help the Tapir with its survival with programs to save, restore and manage the four species of tapir.