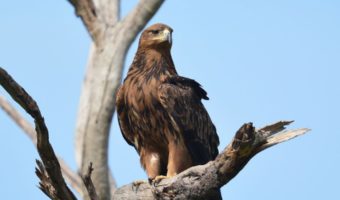 The Tawny Eagle (Aquila rapax) is a handsome, large bird of prey that inhabits Africa. It can be observed both north and south of the Sahara desert.

The Tawny Eagle was once considered a relative of the Steppe Eagle (Aquila nipalensis), however, it is now classed as its own species due to differences in anatomy particularly the length of the gape flange which never extends beyond the middle of the eye in the Tawny Eagle. Steppe Eagles are also larger than Tawny Eagles, nearly twice the size, and darker in color.

Use the information below to find out more about the Tawny Eagle’s characteristics, habitat, diet, behaviour and reproduction.

As its name applies, this Eagle has tawny colored upperparts with black flight feathers and tail and a paler lower back area. It has light colored stripes on its wings. The Tawny Eagle’s piercing eyes are brown and it has a yellow beak with a sharp, black, hooked tip. Their legs are heavily feathered and their feet are equipped with large sharp talons.

Tawny Eagles have acute eyesight and their hearing is also an important sense as it helps them locate prey when they are hunting.

Tawny Eagles are endothermic which means they absorb energy from the surrounding heat.

Tawny Eagles are homoiothermic which refers to birds and mammals having constant and relatively high body temperature.

Tawny Eagles are bilateral symmetry – the right half of abody is a mirror image of its left half.

The Tawny Eagle prefers open dry habitats such as deserts, steppes, open grasslands, savannas and mountainous regions. They tend to avoid dense forests as these may restrict their movement.

Like most Eagles, the Tawny Eagles are generalist carnivores and formidable hunters. Their diet relies mainly on fresh carrion of animals that have recently been killed. They also eat insects and kill small animals such as smaller birds, rabbits and small reptiles including lizards and snakes. It will even tackle mammals as large as Hares. The Eagle will make a rapid dive from its perch when the prey is spotted, and seize it in its sharp, powerful talons.

As an opportunistic scavenger, the Tawny Eagle will also steal prey from other raptors. Birds who do this are known as ‘kleptoparasites’. These magnificent birds of prey can be observed alongside other large raptors, such as Vultures, ripping into carcasses.

Tawny Eagles are the only type of eagle that regularly scavenge from humans.

Tawny Eagles do spend time near water where they can drink safely.

Tawny Eagles, like other Eagle species, are diurnal – active by day, sleeping at night. Tawny Eagles tend to occupy the same territory for many years, sometimes even decades, in pairs.

The Tawny Eagle is generally a silent bird but males will emit a crow-like barking or ‘kwok kwok’ noise when displaying to a female or when aggravated. Tawny Eagles are gregarious outside of the breeding season and flocks of 20 or more birds are commonly observed.

Tawny Eagles are strong fliers and can fly at elevations of 600 – 2400 metres (1,968 – 14,760 feet). They particularly fly only when air thermals can assist their soaring and usually perch on a tree or telegraph pole during the day scanning the ground for food.

When Tawny Eagles reach adult size, they probably do not have many predators, if any at all. Tawny Eagles are important members of the ecosystems in which they live.

Tawny Eagles are monogamous and pair for life. Before mating occurs, the male Eagle performs undulating displays and then mutual soaring displays take place in the air. The pairs or the single male will perform high circling flying over the nesting site. Sometimes, the male performs ‘pot hooks’ which involves dives and swoops with little wing flapping. The female may turn over and present her claws in response to the male swooping over her. Males and females may lock claws in flight. Actual mating usually occurs at or near the nesting site.

Tawny Eagles breed once a year. Breeding season falls from April to July.

The female Eagle lays 1 – 3 eggs in a nest made from sticks and twigs which is made in trees or on the ground. Both male and female make the nests together. Nests are generally abandoned after 1 – 3 years. The eggs hatch after being incubated by the female for 39 – 45 days. Incubation is occasionally done by the male.

Chicks become fledglings at around 84 days and become independant at around 120 days although some will remain with their parents until the following breeding season. The chicks are fed mainly by the male and then by both parents when the young become fledglings.

Siblings can be aggressive towards each other, sometimes resulting in the death of the younger hatchling. The conflicts occur during the first few days of hatching.

The life span of the Tawny Eagle is around 16 years. However, the oldest recorded Tawny Eagle living in the wild was 60 years.

Tawny Eagles are classed as ‘Least Concern’ on the IUCN Red List.