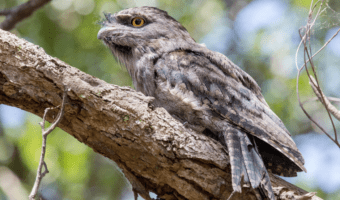 The Tawny Frogmouth is found throughout mainland Australia, Tasmania and southern New Guinea and it also occurs in India and across southern Asia.

There are 15 species of frogmouth throughout the world.

This fascinating Australian bird measures 35 – 53 centimetres (14 – 21 inches) in length and weighs up to 680 grams (1.5 pounds). They are bulky looking birds with large yellow eyes and binocular vision (eyes facing forwards). With excellent hearing along with the excellent eyesight, these birds make formidable nocturnal hunters.

Whispy feathers cover their heads and they have whisker-like feathers around their beak to help them catch prey. Their legs are very short and their feet small and weak. They are slow and deliberate in their movements and are the weakest fliers in the order: Caprimulgiformes. They fly swiftly, but only over short distances. As with all frogmouths they have an extremely long tongue that is forked. 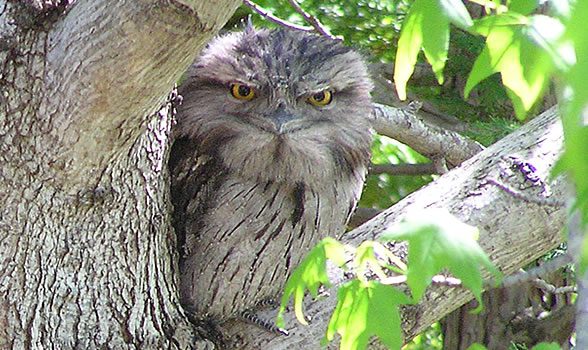 Tawny frogmouths have rounded, medium length wings. The leading edges of the first primary wing feathers of the Tawny Frogmouth are fringed to allow for silent flight. Frogmouths, like owls, have three toes directed forward and one backward – known as ‘anisodactyl feet’, however, owls feet are considerably stronger and are adapted for catching prey.

Tawny Frogmouths may have been named because of their tawny colored plumage with dark streaks, which gives them excellent camouflage. They sit very still and upright which makes them look just like part of the branch or tree. However, their name actually comes from their large flattened, triangular, hooked beak which is olive-grey in color, and huge frog-like gape which is used to catch insects. The general plumage of the frogmouth is silver-grey, slightly paler below. A second plumage phase also occurs, with birds being russet-red.

The Tawny Frogmouth inhabits forests and scrubland and a range of acacia woodlands with special preference for open eucalyptus woodlands, suburban parks or even golf courses. It avoids dense forests and treeless deserts.

The Tawny Frogmouth’s diet is almost exclusively insectivorous and it feeds up on a vast variety of insects including spiders, centipedes, worms, slugs, snails and cockroaches. It will sometimes feed on scorpions, frogs, mice, small birds and other small prey. Some prey, such as moths, are caught in flight. 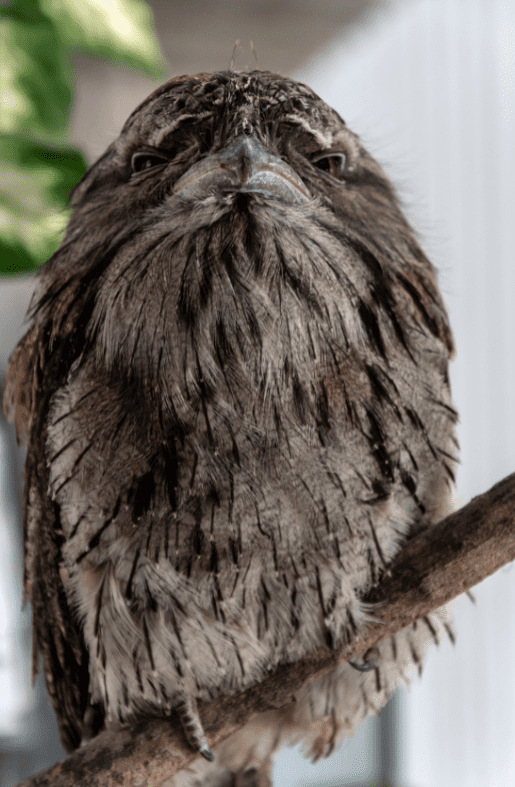 The tawny frogmouth is not a raptor despite its owl-like appearance and unlike owls, it catches its prey in its beak instead of its talons. Another way that frogmouths differ from owls is that, owls fly around at night, hunting for prey, while the frogmouth will just sit there on a low branch and wait for food to come to them. When it does hunt, it usually pounces from a low, elevated perch such as a fence post or road sign, onto small terrestrial animals crossing bare, open ground.

They tend to live in pairs that maintain permanent territory which extends 40 – 80 hectares (0.4 – 0.8 square kilometres).

Tawny Frogmouths are vocal birds and produce loud clacking sounds with their beaks and a soft, deep, continuous, ‘ooo-ooo-ooo’ sound. They can be heard emitting a soft warning buzz, similar to a bee, when startled. These owl-like creatures are nocturnal and hunt during the night, spending the day roosting on a tree branch close to the tree trunk or a dead log.

When Tawny frogmouths feel threatened, they remain perfectly motionless. They close their eyes and point their beak straight and rely on their remarkable camouflage for protection.

Tawny Frogmouths are monogamous and pairs will remain together until one of them dies. Breeding season is from August to December. The same nesting site is used each year, therefore, nest repairs have to be made to loose sticks, twigs and untidy platforms and new leaves are used to line the inside. Sometimes the nest with be lined with their own feathers which are camouflaged with lichen, moss and spider webs. Nests are generally 15 metres off the ground.

The female lays 2 – 3 eggs in the nest and both male and female take turns to incubate them, the female at night and the male during th day. After the eggs have been incubated for around 30 days, the frogmouth chicks hatch out and are covered in downy feathers. Both parents feed the hatchlings and after 25 – 35 days the chicks become fledglings and leave the nest to be indepedent.

The life span of the Tawny frogmouth is up to 10 years. 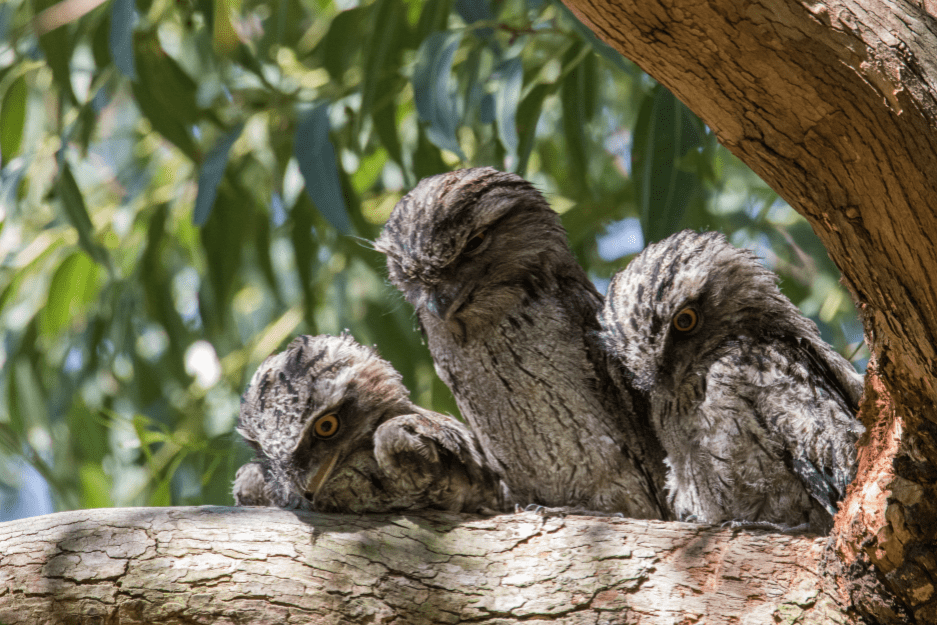 Tawny frogmouths are classed as ‘Least Concern’ by the IUCN. Frogmouths are abundant throughout their range, however, they are often injured or killed on the roads during feeding.

They are at high risk of exposure to pesticides as they have adapted to living in close proximity to human populations. Tawny frogmouths are also at risk from predators, such as foxes, dogs and cats.