You are here: Home / Animals / The Skunk 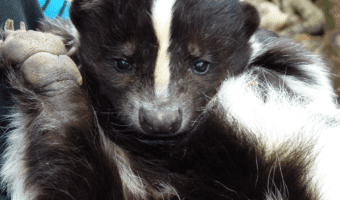 Skunks can be found solely in the New World, across North America and South America. The different genus can be found in different areas. They inhabit woodlands, deserts, grasslands, and rocky montane areas, but do not occur in dense forest. These animals are mainly omnivorous, eating vegetation, insects and other small invertebrates, and smaller vertebrates.

Skunks are generally abundant and are not considered to be endangered. However, certain species are considered rare or possibly threatened due to hurting by humans and demand for their fur.

There are ten living species of skunk. These are: 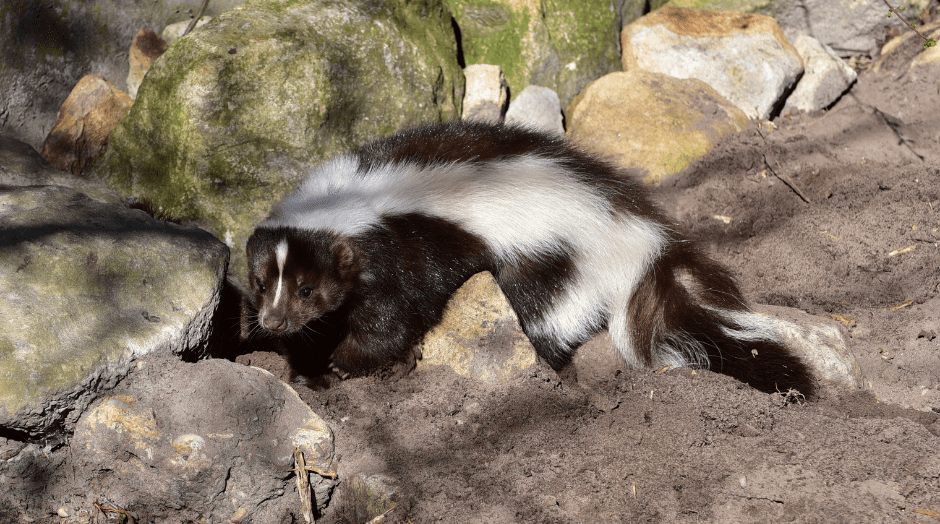 These animals are recognized by their their striking color patters. Skunks are usually black, but are sometimes brown, and have a prominent, contrasting pattern of white fur on their faces, backs and bushy tails. All skunks are striped, even from birth. They may have a single thick white stripe across the back and tail, two thinner stripes, or a series of white spots and broken stripes (in the case of the spotted skunk).

These stripes across their back and tail are known as their warning coloration, and are there to ward off any predators.

Skunks have moderately elongated bodies with relatively short, well-muscled legs and long front claws for digging. They have five toes on each foot. Their tail is thickly furred.

Muscles next to the scent glands allow skunks to spray with a high degree of accuracy, as far as 3 m (10 ft). They carry just enough of the chemical for five or six successive sprays, and require up to ten days to produce another supply.

Skunks do not spray other skunks, except among males in the mating season.

Between 50% and 70% of juvenile skunks do not survive the first year, due to both predation and disease.

They are nocturnal animals and forage for food during the night. They root along the ground and dig up their prey. While they do not have good eyesight to find their prey, they do have an excellent sense of smell. 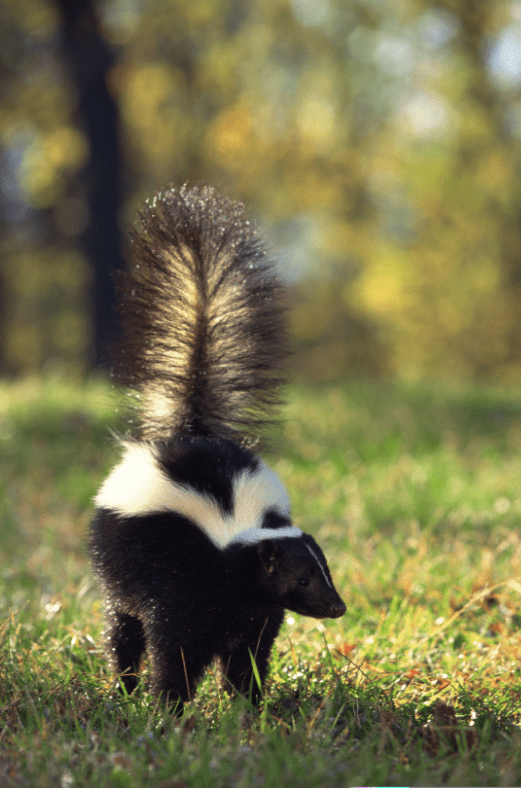 Skunks are usually solitary animals when they are not breeding, although may gather together for communal warmth in the coldest parts of their range. They are not typically aggressive towards each other, but males will defend females during the mating season.

They are crepuscular, but also hunt during the night, spending the day sheltering in their burrows which they can dig with their powerful front claws.

Aside from using their spray and their warning coloration to deter predators, skunks also hiss, foot-stamp and exhibit threat postures. While skunks do not spray each other, they will fight with their teeth and claws over den space.

Skunks do not actually hibernate during the winter, but do go into their dens for extended periods of time. During this time, they remain generally inactive and feed rarely, going through a dormant stage. Over winter, multiple females (as many as 12) huddle together.

These animals are not vocal, but sometimes communicate with grunts, growls, and hisses.

Not a lot is known about the reproductive habits of the skunk. They are seasonal breeders and the breeding season lasts two to three months, but the time of the breeding season varies among species. It is usually in the spring time. Skunks are polygynous and males may fight with one another to breed with a female.

The gestation period is around 66 days. Before giving birth, the female excavates a den to house her litter of kits. The litter size varies from 2 to 10 kits, which are born blind, deaf, but already covered by a soft layer of fur. About three weeks after birth, they first open their eyes and the kits are weaned about two months after birth. Young skunks generally stay with their mother until they are ready to mate, which is at around one year of age.

Females are very protective of their young and will spray any predators, but males play no part in raising their young.

These animals are usually found in relatively open forests, grasslands, agricultural areas, meadows, open fields, and rocky montane areas. They spend the day undercover, usually in burrows or under the cover of rocks or logs. They can dig the burrows themselves, or may use the dens of other species, such as marmots or badgers. Males and females occupy overlapping home ranges through the greater part of the year, typically 2 to 4 km2 (0.77 to 1.54 sq mi) for females and up to 20 km2 (7.7 sq mi) for males.

Some skunks are also agile climbers, and can be found in trees in search of food or to avoid predators. 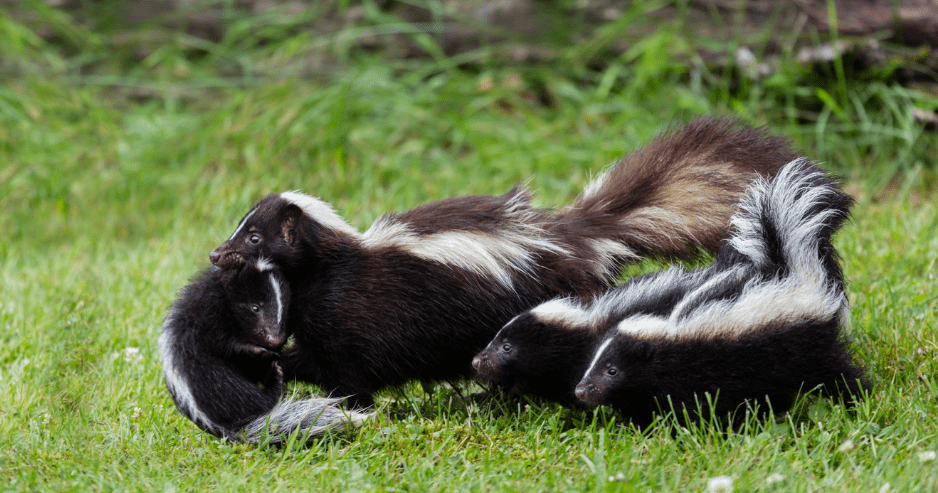 Skunks are not generally thought to be in any danger of population decline, and they are generally abundant across their range. However, some species are considered rare or possibly threatened, and the Palawan stink badger is currently listed as vulnerable on the IUCN red list, due to human induced habitat degradation and fragmentation.

Humans are adult skunks largest threat. Skunks are considered to be pests due to their smell and their occasional predation on domestic poultry and eggs. They are often shot or killed by humans. Skunks also have very bad eyesight, which often results in them wandering out onto roads and being hit by cars.

The pelts of skunks are sometimes traded, although they are currently not in high demand.

Despite their warning coloration and their stink, skunks are still at risk of predation from larger carnivores such as coyotes, foxes, pumas, civets, American badgers, and lynx. Eagles and owls, particularly great-horned owls, are known to prey on skunks.

Juvenile skunks are much more likely to be preyed on than adults, with 50 to 70% not making it through the first year of life.

What do skunks eat?

Skunks do not actually hibernate, but in the coldest months will stay huddled in their dens and become pretty inactive. During this time they eat very little and sleep quite a lot.

Where do skunks live?

They spend the day in burrows in open forests, grasslands, agricultural areas, meadows, open fields, and rocky montane areas. They can either dig these burrows themselves, or use dens leftover by other species.