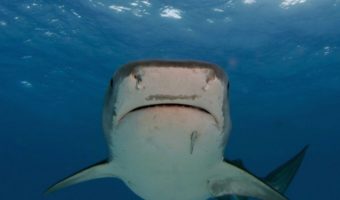 The Tiger Shark is one of the largest sharks in the world.

The Tiger shark is found in many of the tropical and temperate regions of the worlds oceans and is especially common around islands in the central Pacific. It is the only member of the genus ‘Galeocerdo’.

The Tiger shark is often found close to the coast, in mainly tropical and sub-tropical waters, though they can reside in temperate waters. 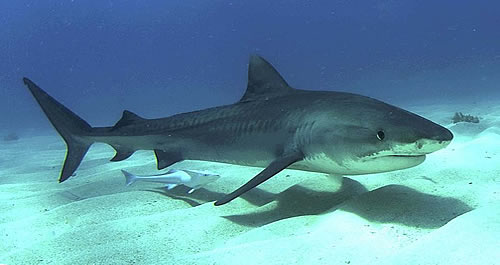 The Tiger sharks skin can typically range from a blue or green hue to light with a white or light yellow underbelly. The distinguishing dark spots and stripes are most outstanding in young sharks and fade as the shark matures.

The Tiger sharks head is somewhat wedge-shaped, which makes it easy for the shark to turn quickly to one side. Tiger sharks, as with other sharks, have small pits on the side of their upper bodies which hold electrical sensors called the ‘ampullae of lorenzini’, enabling them to detect small muscle movements of other creatures, allowing them to hunt in darkness. In addition, the Tiger shark, like many other sharks, has a mirror-like covering behind their retina called ‘tapetum lucidum’ that is exposed in darkness to reflect light that has already been seen by the retina back at it as to allow the shark to see better. A Tiger shark generally has long fins and a long upper tail. The long fins act like wings and provide lift as the shark manoeuvres through water, whereas the long tail provides bursts of speed. A Tiger shark normally swims using nimble movements of its body. Its high back and dorsal fin act as a pivot, allowing it to spin quickly.

The Tiger sharks teeth are flat, triangular, notched and serrated. Like most sharks, when a tiger shark loses or breaks one of its teeth, it grows a replacement tooth. The distinctive teeth seem to have evolved to be able to cut through turtle shells and an adult Tiger shark can easily bite through bone.

The Tiger shark is a solitary hunter, usually hunting at night. Its name is derived from the dark stripes down its body.

The Tiger shark is a dangerous predator, known for eating a wide range of prey. Its usual diet consists of fish, seals, birds, smaller sharks, squid and turtles. It has sometimes been found with man-made waste such as license plates or pieces of old tires in its digestive tract. The Tiger shark is notorious for attacks on swimmers, divers and surfers in Hawaii and is often referred to as the ‘bane of Hawaiian surfers’ and ‘the wastebasket of the sea’.

The Tiger sharks behaviour is primarily nomadic (moving from one place to another, rather than settling down in one location), however, it is guided by warmer currents and it remains closer to the equator throughout the colder months. The Tiger shark tends to stay in deep waters that line reefs but does move into channels to pursue prey in shallower waters.

The Tiger shark is second only to the Great White shark in number of recorded human fatalities and is considered, along with the great white, bull shark and the oceanic whitetip shark to be one of the sharks most dangerous to humans. It is often colloquially called the man-eater shark.

Sexual maturity of the Tiger Shark is reached at different stages for the male and female. Males mature when they reach a length of 2.26 metres (7 feet) to 2.9 metres (10 feet) whereas females mature at 2.5 metres (8 feet) to 3.25 metres (11 feet). It has been estimated that the Tiger shark can swim at a maximum speed of around 32 kilometres per hour (20 miles per hour), with short bursts of higher speeds that last only a few seconds.

The Tiger shark breeds by internal fertilization. It is the only species in its family that is ovoviviparous, like mammals, it gives birth to live young. Mating in the northern hemisphere will generally take place between the months of March and May, with the young being born around April or June the following year. In the southern hemisphere, mating takes place in November, December or early January.

Young Tiger Sharks are nourished inside the mothers body for up to 14 to 16 months, where the female can produce a litter ranging from 10 to 80 young. A newborn tiger shark is generally 51 centimetres (20 inches) to 76 centimetres (30 inches) long and leaves its mother upon birth. It is unknown how long Tiger sharks live, but it has been speculated to be 20 years.

Although shark attacks on humans are a relatively rare phenomenon, the Tiger shark is responsible for a large percentage of the fatal attacks that do occur on humans and is regarded as one of the most dangerous species of sharks. Tiger sharks reside in temperate and tropical waters. They are often found in river estuaries and harbours, as well as shallow water close to shore, where they are bound to come into contact with humans. Because of their curious nature of feeding it is expected that a Tiger shark would normally attack a human if it came in contact with it. Tiger sharks are known to dwell in waters with runoff, such as where a river enters the ocean.

Tiger sharks have become a recurring problem in Hawaii and are considered the most dangerous shark species in Hawaiian waters. They are considered to be sacred ‘aumakua’ or ancestor spirits by the native Hawaiians, however between 1959 and 1976, 4,668 Tiger sharks were hunted down in an effort to control what was proving to be detrimental to the tourism industry. Despite these numbers, little decrease was ever detected in the attacks on humans. It is illegal to feed sharks in Hawaii and any interaction with them such as cage diving is discouraged.

Tiger Sharks are classed as ‘Near Threatened’. While the Tiger shark is not directly commercially fished, it is caught for its fins, flesh and liver which is a valuable source of vitamin A used in the production of vitamin oils.