You are here: Home / Animals / Tortoise 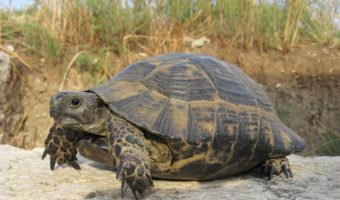 A Tortoise is a land-dwelling reptile of the order Testudines.

Tortoises are found worldwide with the most famous tortoise of all, the Giant Tortoise Lonesome George who lives on the Galapagos Islands near Ecuador. Tortoises, like their aquatic cousins, the Turtles, have a hard shell which protects their body. 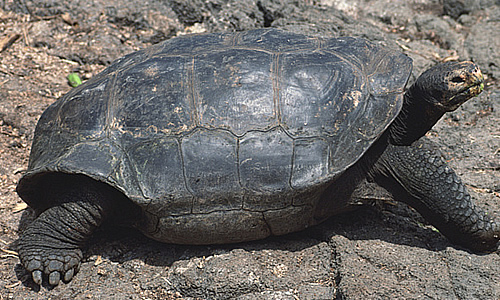 Many tortoises can retract their head, their four limbs and tail into the shell for protection. Tortoises have a beak but no teeth and no external ears, just two small holes on the sides of the head. Tortoises can vary in size from a few centimetres up to two metres in length. Male tortoises tend to have a longer, protruding neck plate than their female relatives.

Tortoises tend to be diurnal (active during the day) animals with tendencies to be crepuscular (animals that are primarily active during the twilight), depending on the ambient temperatures. Tortoises are generally reclusive and shy creatures.

Female tortoises dig and lay about a dozen eggs in burrows or holes they dig.

Hatchlings take approximately 90 – 120 days to incubate from eggs the size of a ping-pong ball.

The hatchlings break out of their shells with a front beak. Most hatchlings are born with an embryonic egg sac which serves as a source of food for the first couple of days. Tortoise hatchlings are capable of eating solid food in about 3 – 7 days.

Tortoises generally have life spans comparable with those of human beings, however, some tortoises have been known to have lived longer than 150 years.

Tortoises and Turtles have existed since the era of the dinosaurs, some 300 million years ago. Tortoises and Turtles are the only surviving branch of the even more ancient clade Anapsida, which includes groups such as the procolophonoids, millerettids and pareiasaurs. Most of the anapsids became extinct in the late Permian period, with the exception of the procolophonoids and the precursors of the testudines (turtles and tortoises).