You are here: Home / Animals / Tuatara 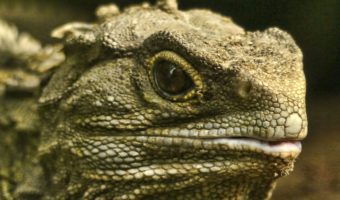 The Tuatara is a reptile of the family Sphenodontidae, endemic to New Zealand. The two species of tuatara are the only surviving members of the Sphenodontians who flourished around 200 million years ago.

The tuataras resemble lizards, but are equally related to lizards and snakes, which are their closest living relatives.

For this reason, tuataras are of great interest in the study of the evolution of lizards and snakes and for the reconstruction of the appearance and habits of the earliest diapsids (the group that additionally includes birds and crocodiles). Tuataras have been referred to as living fossils. This means that they have remained mostly unchanged throughout their entire history, which is approximately 200 million years.

The tuatara is considered the most unspecialised living amniote; the brain and mode of locomotion resemble that of amphibians and the heart is more primitive than any other reptile. Adults are about 50 centimetres (20 inches) long and weigh between 0.5 and 1 kilogram (1.1 – 2.2 pounds).

Tuataras display sexual dimorphism, as the males are larger, weighing up to 1 kilogram (2.2 pounds), almost twice the weight of the females. The spiny crest on their back, made of triangular soft folds of skin, is bigger in males than in females and can be stiffened for display. The male abdomen is narrower than the females.

The tuataras color ranges from olive green to brown to orange-red and it can change color over its lifetime. It sheds its skin at least once per year, usually 3 or 4 times as juveniles.

The tip of the upper jaw is beak-like and separated from the remainder of the jaw by a notch. There is a single row of teeth in the lower jaw and a double row in the upper jaw, with the bottom row fitting perfectly between the two upper rows when the mouth is closed. This is a tooth arrangement not seen in any other reptiles; although most snakes also have a double row of teeth in their upper jaw, their arrangement and function is different from the tuatara’s.

As their teeth wear down, older tuataras have to switch to softer prey such as earthworms, larvae and slugs and eventually have to chew their food between smooth jaw bones.

In tuataras, both eyes can focus independently and are specialized with a ‘duplex retina’ that contains two types of visual cells for vision by both day and night and a tapetum lucidum which reflects on to the retina to enhance vision at night. There is also a third eyelid on each eye, the nictitating membrane.

The tuatara has a third eye on the top of its head called the ‘parietal eye’. It has its own lens, cornea, retina with rod-like structures and degenerated nerve connection to the brain, suggesting it evolved from a real eye. The parietal eye is only visible in hatchlings, which have a translucent patch at the top centre of the skull. After four to six months it becomes covered with opaque scales and pigment. Its purpose is unknown, but it may be useful in absorbing ultraviolet rays to manufacture vitamin D, as well as to determine light/dark cycles and help with thermoregulation. Of all extant tetrapods, the parietal eye is most pronounced in the tuatara. In mammals, it has become the pineal gland.

Together with turtles, the tuatara has the most primitive hearing organs among the amniotes. There is no eardrum and the middle ear cavity is filled with loose tissue, mostly adipose tissue. Tuataras respond only to low frequencies.

Adult tuataras are terrestrial and nocturnal reptiles, though they will often bask in the sun to warm their bodies. Hatchlings hide under logs and stones and are diurnal, likely because adults are cannibalistic. Tuataras survive in temperatures much lower than those tolerated by most reptiles and hibernate during winter.

Tuataras reproduce very slowly, sometimes taking ten years to reach sexual maturity. Mating occurs in midsummer when females mate and lay eggs once every four years. During courtship, a male makes his skin darker, raises his crests and parades toward the female. He circles himself around the female while slowly walking with stiffened legs. The female will either submit and allow the male to mate with her or retreat to her burrow. Males do not have a penis, instead they reproduce by lifting the tail of the female and placing his vent over hers. The sperm is then transferred into the female.

Tuatara eggs have a soft, parchment-like shell. It takes the females between one and three years to provide eggs with yolk and up to seven months to form the shell. It then takes between 12 and 15 months from mating to hatching. This means reproduction occurs at 2 to 5 year intervals, the slowest in any reptile. The sex of a hatchling depends on the temperature of the egg, with warmer eggs tending to produce male tuataras and cooler eggs producing females. Eggs incubated at 21° C have an equal chance of being male or female. However, at 22° C, 80% are likely to be males and at 20° C, 80% are likely to be females; at 18° C all hatchlings will be females.

Tuataras probably have the slowest growth rates of any reptile, continuing to grow larger for the first 35 years of their lives. The average life span is about 60 years, however, they can live to be over 100 years old.

The tuatara has been classified as an endangered species since 1895. Tuataras, like many of New Zealand’s native animals, are threatened by habitat loss and introduced species, such as mustelids (weasel family) and rats. Tuataras were extinct on the mainland, with the remaining populations confined to 32 offshore islands, until the first mainland release into the heavily fenced and monitored Karori Wildlife Sanctuary in 2005.