You are here: Home / Animals / Turtles 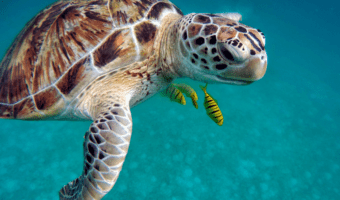 Turtles are reptiles of the order Testudines (all living turtles belong to the crown group Chelonia), most of whose body is shielded by a special bony or cartilaginous shell developed from their ribs. The top part of the shell is called a carapace and the bottom is called the plastron just like a Tortoise.

The shell is covered with scutes, scales that are made of keratin (the same protein that our fingernails are made of and the horn of a rhino).

The Order Testudines includes both extant (living) and extinct species, the earliest turtles being known from around 250 million years ago, making turtles one of the oldest reptile groups and a much more ancient group than the lizards and snakes. About 300 species are alive today. Some are highly endangered. Turtles, like other reptiles, are ectothermic or cold-blooded, which means that their body temperature changes with their surroundings. 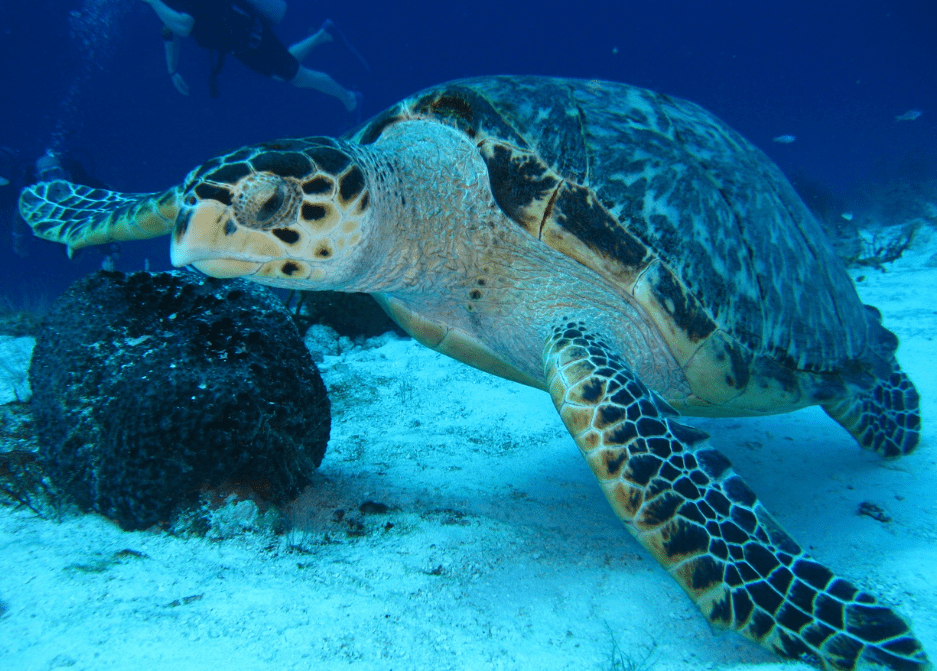 Turtles vary in size depending on species. Sea or Marine Turtles tend to be the larger ones when compared to pond or land turtles.

Turtles are capable of retracting their head and limbs inside of the shells for protection and also to sleep. Turtles have no teeth, however, they have a beak which they are born with. Just like Tortoises, they have no external ears, just two small holes on the sides of their heads. Their nostrils are located near the top of their heads, therefore, allowing them to breath near the water surface without having to lift the heads out of the water.

Pond turtles have small, flat feet that are webbed. Larger turtles such as the sea turtles have large, broad flippers which it uses to glide itself through the waters. Pond turtles have a very agile neck and can fold it into its shell in an ‘S’ shape. A sea turtle cannot do this.

There are seven species of sea turtle:

Flatback Turtle (atator depressus) – otherwise known as the Australian Flatback and appropriately named because its shell is very flat. This turtle is only found in the waters around Australia and Papua New Guinea in the Pacific ocean. Adult Flatbacks measure up to 3.25 feet (99 centimetres) in carapace length and weigh on average about 198 – 200 pounds. Its diet consists of sea cucumbers, jellyfish, mollusks, prawns, bryozoans, other invertebrates and seaweed.

The Flatback turtle prefers to inhabit inshore waters, bays, coastal coral reef and grassy shallows. Reproduction occurs four times per season and an average of 50 eggs are laid each time. The eggs are incubated for around 55 days and hatchlings are larger than most species.

With a population of only 20,280 nesting females, the Flatback turtle is classed as critically endangered. Threats include: destruction of nesting beaches, ocean pollution, oil spills, harvesting of eggs and entanglement in fishing and shrimp nets.

Hawksbill Turtle (Eretmochelys imbricata) – appropriately named for its narrow head and hawk-like beak. Being the most tropical of all sea turtles, the Hawksbill turtle is found in tropical and subtropical waters of the Atlantic ocean, Pacific ocean and Indian Ocean.

Adults measure 2 – 3 feet in length and weigh around 100 – 150 pounds. Hawksbill turtles are typically found around coastal reefs, rocky areas, estuaries and lagoons. Their diet consists of sponges, anemones, squid and shrimp. Their hawk-like beak enables them to forage for food in crevices of coral reefs. Hawksbill turtles nest 2 – 3 times per year, laying an average of 160 eggs per time. Eggs are incubated for 60 days.

The Hawksbill turtle is classed as critically endangered with only 22,000 nesting females surviving. Their major threat is the harvesting of their prized shell for hair ornaments and jewellery making.

Green Sea Turtle (Chelonia mydas) – is named for the green coloring of the fat underneath its shell. Adults are 3.5 to 4 feet (76 – 91 centimetres) in carapace length and weigh 300 – 400 pounds. The green turtle is the largest of the Cheloniidae family. 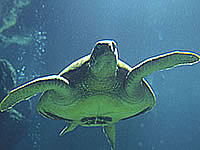 The largest green sea turtle ever found was 5 feet (152 centimetres) in length and 871 pounds (395 kilograms) in weight. Green Sea turtles are herbivores and their diet changes throughout their growth. When they are less than 10 inches long they tend to eat worms, small crustaceans, aquatic insects, grasses and algae. Once they grow longer than 10 inches, their diet changes to grass and algae only. Finely serrated jaws help them to tear at vegetation. Rarely seen in open waters, their preferred habitats include coastlines, bays and protected shores particularly in areas with sea grass beds in temperate and tropical waters throughout the world.

With 88,550 nesting females, they are classed as endangered species. Major threats include harvesting for eggs and food. Other green turtle parts are used for leather and small turtles are sometimes stuffed for curios.

Leatherback Turtle (Dermochelys coriacea) – named for its unique shell which is composed of a layer of thin, tough, rubbery skin, strengthened by thousands of tiny bone plates that makes it look ‘leathery’. The Leatherback turtle measures 4 to 6 feet (121-183 centimetres) in length and weighs between 550 to 1,545 pounds (250 – 700 kilograms).

The largest leatherback turtle ever recorded was almost 10 feet (305 centimetres) from the tip of its beak to the tip of its tail and weighed in at 2,019 pounds (916 kilograms). With delicate, scissor-like jaws, Leatherback turtles feed exclusively on jellyfish. Their jaws would be damaged by anything other than a diet of soft-bodied animals. It is quite amazing that a creature so large and active can survive on a diet of jellyfish, which are composed mostly of water and appear to be a poor source of nutrients.

Leatherback turtles are primarily found in the open ocean, as far north as Alaska and as far south as the southern tip of Africa. This powerful turtle can swim thousands of miles against the strongest currents.

With only 35,860 nesting females, the Leatherback turtle is classed as endangered. Threats include, marine pollution whereby balloons and plastic bags are mistaken for jellyfish and subsequently eaten by the turtles.

Kemps Ridley Turtle (Lepidochelys kempii) – named after its discoverer, Richard kemp, this turtle measures 2 feet in length and weighs around 100 pounds. The Kemps Ridley Turtles have powerful jaws that help them to crush and grind crabs, clams, mussels, and shrimp. They also like to eat fish, sea urchins, squid and jellyfish.

Found around the Gulf of Mexico and in tropical waters in the Northwest Atlantic, their preferred habitats are shallow waters with sand and muddy bottoms. Nesting occurs 2 – 3 times per season with an average of 110 eggs laid per session. Incubation time is 55 days. Listed as endangered, with only 2,500 nesting females surviving, the Kemps Ridley turtle is often killed for meat and other products. Collection of eggs is also another major threat.

Olive Ridley Sea Turtle (Lepidochelys olivaceaf) – named for its olive-green shell, the Olive Ridley sea turtle measures 2 to 2.5 feet (62 – 70 centimetres) in carapace length and weighs 80 – 100 pounds. It is generally found in coastal bays and estuaries in tropical and subtropical waters of the Pacific, Indian and Atlantic oceans.

As an omnivore, the Olive Ridley sea turtle typically forages off shore, however, it can dive to depths of 500 feet to feed upon bottom dwelling crustaceans such as shrimp, crabs and molluscs. It also feeds on fish. The Olive Ridley sea turtles powerful jaws helps it to crush the shells of its prey. These turtles nest every year, twice each session. Females lay over 105 eggs in each nest. Each clutch of eggs requires 52 – 58 days of incubation.

With 800,000 nesting females, the Olive Ridley turtle is classed as threatened, possibly becoming endangered in the near future. Threats to survival include harvest of adults and eggs, loss of nesting habitats and capture in commercial fisheries.

Loggerhead Turtle (Caretta caretta) – appropriately named for its exceptionally large head, this turtle measures 2 – 3 feet in length and weighs up to 350 – 400 pounds. The Loggerhead turtle is a carnivore and feeds mainly on shell fish, horse shoe crabs, clams, mussels and other invertebrates. Their strong jaws help them crush the shells.

The Loggerhead turtles preferred habitats are coastal bays and estuaries, as well as in the shallow water along the continental shelves of the Atlantic, Pacific and Indian Oceans. Loggerhead turtles are mainly found in tropical and temperate waters throughout the world. Nesting occurs 2 – 3 times per year whereby they lay 4 – 7 nests per season, 12 – 14 days apart. Females lay an average of 100 – 130 eggs in each nest. Eggs are incubated for around 60 days.

With 44,500 nesting females surviving, the Loggerhead turtle is classed as threatened, with the possibility of becoming endangered in the near future. Their greatest threat is loss of nesting habitat due to coastal developments as well as marine pollution and human disturbances.