You are here: Home / Animals / Vulture Vultures are medium to large sized Raptors or birds of prey.

There are around 30 different species of Vulture throughout the world except the continents of Antarctica and Oceania.

Africa’s White-backed Vulture (Gyps africanus) is an Old World Vulture who is closely related to the European Griffon (Gyps fulvus). It ranges from Mauritania, east to Ethiopia and south through East Africa to South Africa.

Old World and New World Vultures are not related. They are collectively called Vultures because they are similar in appearance and they are believed to be connected through evolutionary status rather than DNA.

A group of Vultures is known as a ‘venue’ and when the group is seen in the air, circling together, it is called a ‘kettle’.

Use the information below to find out more about the White-backed Vulture’s characteristics, habitat, diet, behaviour and reproduction. 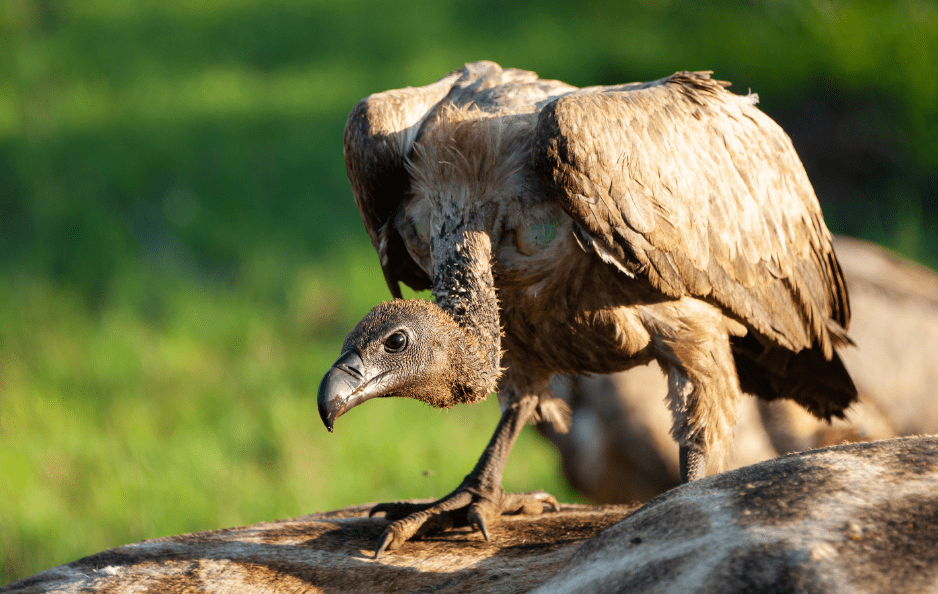 The White-backed Vulture is a medium sized bird which measures around 94 centimetres (37 inches) in length and weighs between 4 and 7 kilograms (9 – 16 pounds). It has a wingspan of 4 – 5.5 feet (1.2 – 1.7 metres). Its wings are very broad and its tail feathers are short. Down feathers are present on its head and neck and it has a white neck ruff.

As its name suggests, the back of this Vulture is white in color which contrasts with its dark plumage. As these Vultures age, their plumage becomes paler and plainer, especially the females.

Vultures have muscular legs, sharp talons and sharp bills. The African White-backed Vulture lacks neck feathers which prevents it from becoming soiled when dipping into a carcass.

Ticks and Mites and other parasites will not stay on the neck of the Vulture for too long as the neck is exposed to the suns ultra violet rays to kill bacteria. The vulture also loves to rub its neck on rocks to clean.

Vultures have incredible eyesight during the day which enables them to spot their prey while soaring through the sky, a Vulture can spot a large animal carcass from around 4 miles away on open grassland or savanna plains. Their vision is not so good at night. Vultures also have a very well developed sense of smell which also helps them to find their food.

The preferred habitats of the Vulture are deserts, savannas and grassland near a water source. It also inhabits wooded country with game animals and livestock, up to 3,000 metres above sea level. 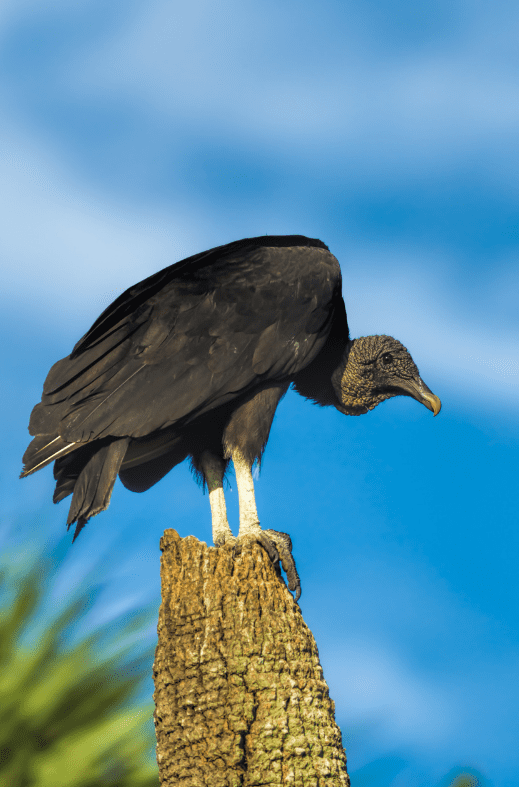 Vultures are carnivores and scavengers and feed mainly on carrion of freshly killed animals. Flocks of Vultures can be observed soaring over the Savannas, searching for carcasses and sometimes following ungulates as they undertake their regular migrations. Vultures will also eat scraps from human habitats.

Most birds of prey will feed on live prey, however, Vultures are specialized ‘eaters of the dead’. It is not an uncommon sight to see a group of different species of Vulture feeding on a dead animal at the same time.

On a huge carcass, such as a dead elephant, hundreds, sometimes a thousand Vultures can be seen sqabbling over the kill, making grunts and goose-like hisses and cackles. The scrum of vultures can be seen dipping their long, bare necks under the skin of the carcass or crawling into the ribcage as they feed on the dead remains.

After gorging themselves, the vultures may bathe together with other species at a favourite site, or rest with their wings spread and backs to the sun. Despite their ghastly habits, vultures are one of the fussiest birds when it comes to cleanliness.

Vultures can eat as well as digest meat, in any stage of decay and can even endure diseases that would kill any other animal. Vulture stomach acid is exceptionally corrosive, allowing them to safely digest putrid carcasses infected with Botulinum toxin, hog cholera, and anthrax bacteria that would be lethal to other scavengers. This also enables them to use their reeking, corrosive vomit as a defense when threatened.

If a dead animal has a very thick hide which the vulture cannot get into, it waits for a larger scavenger to eat first. Vultures are known to strip meat, skin and even feathers, leaving only the skeleton of the animal remaining, however, some vultures will also eat bones, along with the other parts of an animal.

Vultures seldom attack healthy animals, however, they may kill a wounded or sick animal.

Vultures are generally solitary animals although they will fly in focks when circling prey. Vultures can fly at speeds of 48 kilometres per hour (30 miles per hour).

Vultures are high flying birds with the Ruppell’s Vulture being the world’s highest flyer with a record of 37,000 feet. Vultures can fly for a very long time, without becoming tired, as they glide on the thermal updrafts which gives them a ‘free lift’. They fly in circular motions in order to gain height.

Vultures have a unique way of cooling themselves in the African heat by urinating. This not only cools them, but disinfects their legs which kills any germs they may have picked up walking through the carcasses.

The main predators of the Vultures are Hawks, Snakes and Wild cats. To get away from any danger the vulture will bring up what it has just eaten, or some projectile vomit that will smell awful for a few days if it touches you.

The White-backed Vulture breed at the beginning of the dry season. They breed in savanna trees in west and east Africa, nesting in loose colonies of between 2 – 13 birds.

Vultures tend to have just one mate per year. Female Vultures lay one egg at a time in a platform nest made from leaves and sticks built in trees or cliffs. The same nest might be used for a number of years.

Eggs are incubated for around 50 days. Young Vultures are dark in color with light brown streaks on their feathers.

Young Vultures are fed by both parents until they fledge at around 120 – 130 days. Vultures mature at around 5 – 7 years old.

The White-backed Vulture is classed as ‘Least Concern’ to ‘Near Threatened’ on the IUCN Red List (2007). However, conservationists in South Africa are warning that vultures are endangered and could soon become extinct because they are being hunted down for use by traditional healers.

Other factors of their decline include habitat loss due to agriculture, declines in wild ungulate populations which reduces the availability of carrion on which to feed, drowining in farm reservoirs, persecution and poisoning.

A number of protected areas in Africa hold populations of white-backed vultures, including Serengeti National Park in Tanzania, a World Heritage Site. Recommended measures include establishing legal protection for the species in all range countries, establishing a vulture monitoring network, and determining the most significant threats and seeking solutions.