You are here: Home / Animals / Warthog 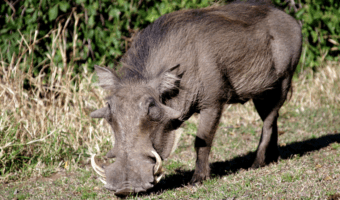 The warthog is currently listed as Least Concern by the IUCN, and is present in numerous protected areas across its extensive range. Many populations are in serious decline due to overhunting in unprotected areas. 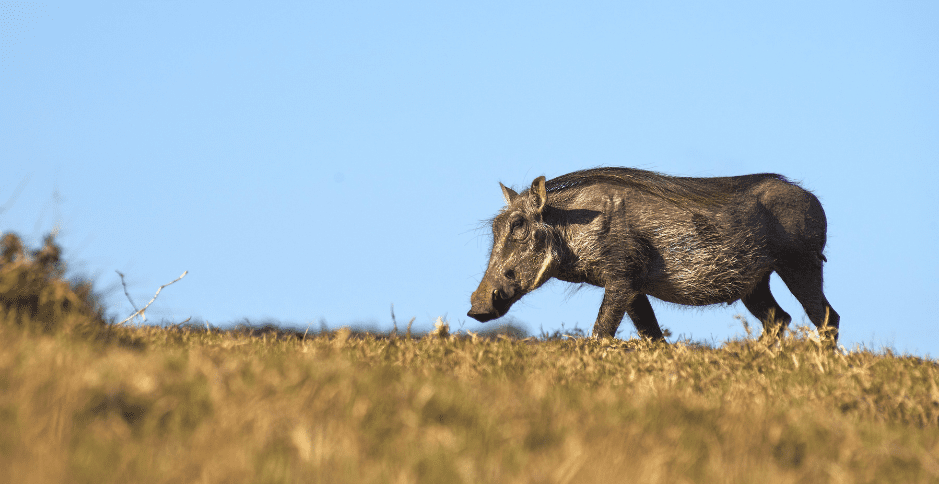 The most identifiable feature are the two pairs of tusks protruding from the mouth and curving upwards. The lower pair, which is far shorter than the upper pair, becomes razor-sharp by rubbing against the upper pair every time the mouth is opened and closed. They are used for digging, as well as fighting and escaping prey.

As their name also suggests, warthogs have patches on their faces that look like warts, but these are actually just thick growths of skin. These patches act as padding for when males fight during mating season. There are three different facial warts these animals have: 1) the suborbital warts, which may grow as long as 15 cm in males; 2) the preorbital warts, which do not develop as much in females; and 3) the submaxillary warts, which have white bristles.

Warthogs are usually black or brown in color and there is sparse hair covering the body. They also have a mane that goes down the spine to the middle of the back. Their tails are long and end with a tuft of hair. They also have large nostrils at the end of their snout

Despite the fact the warthog has a large head and a relatively large body, do not have subcutaneous fat, which makes them susceptible to extreme environmental temperatures.

The warthog has an average lifespan of between 7 and 11 years. The juvenile survival rate is less than 50% in the first year of life, because the young are susceptible to both extreme temperatures and predation. Predation, human disturbance, disease and hunting are the main causes of mortality in all ages of this animal.

Warthogs are the only pig species that has adapted to grazing and savanna habitats. They are omnivores and their diet consists of grasses, roots, berries and other fruits, bark, fungi, insects, eggs and carrion, although their diet will vary depending on the season and what is available. During the dry season, they eat rhizomes and bulbs, which may provide water for common warthogs during periods of drought.

They also eat their own dung, and the dung of rhinoceroses, African buffalos, waterbucks, and francolins!

To search for food, they use their snout and feet. They are specialized for grazing short grasses by being able to lower themselves close to the ground on their wrist joints, which are calloused and padded. 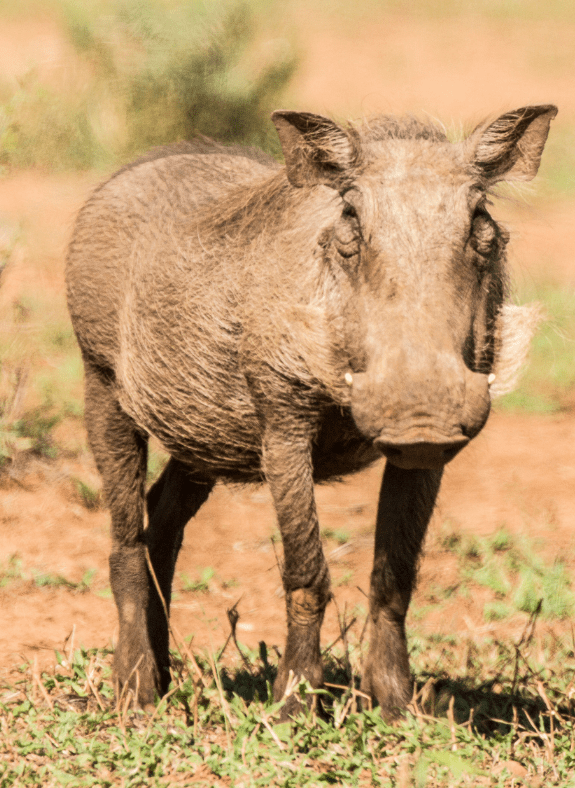 Warthogs live in social groups called sounders, which can contain up to 18 individuals. Females live in sounders with their young and with other females, while males leave their natal group at around two years old but stay in their home range. Females will only leave sounders when they are pregnant. Subadult males associate in bachelor groups, but live alone when they become adults. They will join sounders around breeding times to mate with females.

These animals are not territorial and different warthogs often have overlapping home ranges. They share resting, feeding, drinking, and wallowing sites. They are primarily diurnal and take refuge at night in burrows, but will change this if there is human disturbance and will forage at night instead.

Warthogs have a mutualistic relationship with birds, such as red-billed and yellow-billed oxpeckers. The birds are able to feed on the parasites carried by common warthogs while the beasts are able to rid themselves of these pests. They have also been observed allowing banded mongooses and vervet monkeys to groom them to remove ticks.

Warthogs have poor eyesight but their hearing and sense of smell are very good. They have two facial glands: the tusk gland and the sebaceous gland, which they will start to use around six to seven months old. They will rub their preorbital glands against each other during friendly encounters.

Warthogs rarely fight and are much more likely to flee from predators than face them. They can run at speeds of up to 48 km/h (30 mph), and will run with their tails sticking up and will enter their dens rear first with tusks facing out. However, they will fight with other males during the mating season. Occasionally, they have been observed charging and even wounding large predators. During fights, they grunt and grind their teeth.

Mothers are very protective of their piglets, which are often preyed on by birds of prey such as Verreaux’s eagle owls and martial eagles. She will defend them aggressively.

Warthogs have a polygynandrous mating system and both males and females have many mates. While males do not defend their territories, they will fight with other males for breeding rights with females. Fighting includes pushing and striking with the head and blunt upper tusks. Males are usually solitary animals, but will join sounders to mate with females. Female warthogs use frequent urination to demonstrate their readiness for mating to boars.

Females usually become fertile 4 to 5 months after the rainy season has ended and give birth during the dry season. Once pregnant, a female will leave her sounder and give birth in a burrow, which is important in regulating the body temperature of the piglets, since young warthogs can not maintain their own body temperature the first few days of life.

They have the longest gestation period of all pigs, ranging from 170 to 175 days and give birth to litter sizes of between 1 to 7 piglets, with an average of 3 piglets per litter. The young warthogs spend six to seven weeks in the burrow before venturing out with their mother. Mothers have been observed to nurse foster piglets if they lose their own litter. Adult males do not play a role in parental care.

Piglets begin grazing at about two to three weeks of age and are weaned by six months. They are quick mobile stay close to their mothers for defense. Male warthogs do not leave their mother until they are 2 years of age. They are sexually mature at 18 to 20 months, although males do not typically mate until 4 years of age.

They usually reside in open and wooded savannas, grass-steppes, and semi-deserts. They tend to prefer open areas and avoid rainforest and severe desert, and will sometimes use formerly wooded areas that have been cleared for pastures.

Warthogs will not live where there is human activity. They need areas where they can cool-off in order to cope with high temperatures, such as wallows. They also require areas in which to stay warm in the evening, such as burrows. Often these dens are made by aardvarks. They don’t fight for the holes, though. Warthogs are generally passive and look for already abandoned dens to make their homes.

Warthogs are widespread in their home range and as of 1999, the population in southern Africa is estimated to be about 250,000. They are listed as Least Concern by the IUCN Red List.

However, many populations are in serious decline due to overhunting in unprotected areas. Wildlife reserves are trying to protect warthogs, but outside of these areas there are no regulations on hunting. They are easy to hunt and are valued for their meat, both for local consumption and trade in cities. They are also killed for their tusks, from which warthog ivory is taken. They are carved predominantly for the tourist trade in east and southern Africa.

Warthogs are known to cause damage to various crops, such as rice-fields and peanut crops. Cattle ranchers also see warthogs as competitors for grazing in southern Africa. They are also susceptible to diseases which may be transmitted to domestic pigs, such as the tick-borne African swine fever virus. For these reasons, they may be unlawfully killed in the wild by farmers.

Warthogs are predominantly preyed on by lions, but are also often preyed on by cheetahs, leopards, painted dogs, hyenas, and eagles. They avoid nocturnal predators by being active during the day and sheltering in burrows at night. They also use the warning calls of red-billed and yellow-billed oxpeckers to avoid predators. They are fast runners and usually avoid any attacks by fleeing, although can fight when needed.

Learn about other African Animals