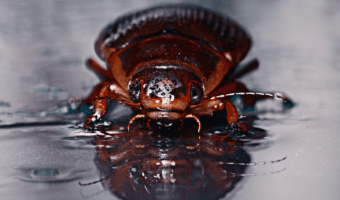 A Water Beetle is a beetle adapted to living in water. A number of different types are known, nearly all living in or on fresh water. The few marine species tend to live in the intertidal zone (also known as the ‘littoral zone’, in marine aquatic environments it is the area of the foreshore and seabed that is exposed to the air at low tide and submerged at high tide).

Many water beetles carry an air bubble underneath their abdomens.

This air bubble provides both an air supply and prevents water from getting into the spiracles (small openings on the surface of some animals that usually lead to respiratory systems). Other water beetles have the surface of their exoskeleton modified to form a plastron (a thin permanent layer of air around the body of some aquatic insects).

Some have a ‘physical gill’, which allows direct gas exchange with the water.

Most families of water beetles have larvae that are also aquatic, but the reverse is not so. Many have aquatic larvae and terrestrial adults.

Beetles that are aquatic in all life stages include ‘Whirligig Beetles’ (Gyrinidae). These are water beetles that normally live on the surface of the water. They get their common name from their habit of swimming rapidly in circles when alarmed and are also notable for their divided eyes which can see both above and below water. 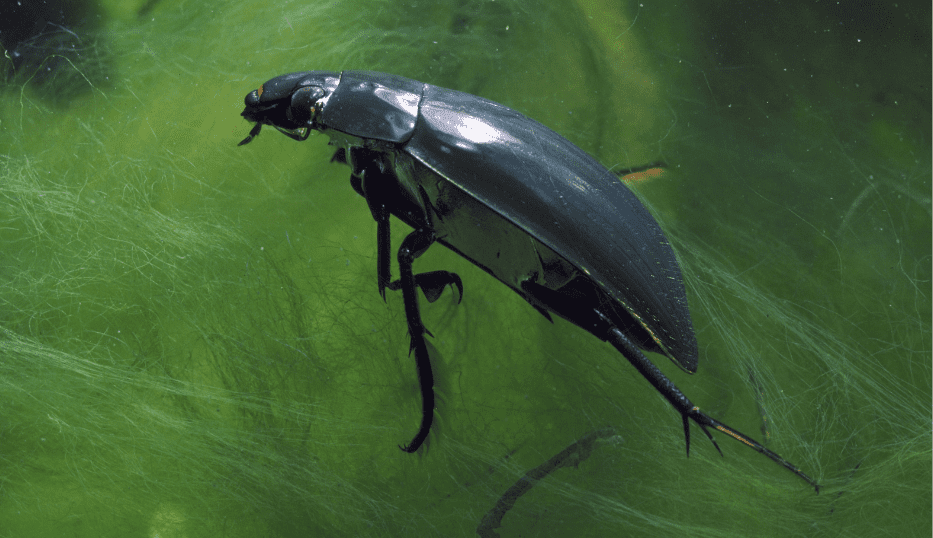 Haliplidae – a family of water beetles who swim poorly using an alternate motion of the legs and therefore prefer to get around by crawling.

Noteridae – a family of beetles relatively small, ranging from 1 to 5 millimetres, with smooth oval bodies ranging from light brown to a darker reddish brown.

Dytiscidae – (able to dive) are known by various common names around the world, including predaceous diving beetles, water beetles and diving beetles). They are about one inch long, dark brown in color with golden highlights and short, but sharp, pincers).

Hydroscaphidae – Skiff beetles which are quite small water-dwelling beetles, ranging in length from 1 – 2 millimetres. Their color ranges from tan to brown and the elytra are abbreviated, leaving several tapering tergites of the abdomen exposed. The antennae are short, as are the legs.

Types in which the adults are not necessarily aquatic include:

Hydrophilidae – a family of mainly aquatic beetles notable for their long maxillary palpi, which are longer than their antennae.

Lutrochidae – a family of water beetles sometimes known as ‘Travertine beetles’, since in North America they are common in springs and streams depositing travertine – a sedimentary rock.

Heteroceridae – mud-loving beetles that are widespread and a relatively common family of beetles. They occur on every continent except for Antarctica).

Sphaeriusidae – typically found along the edges of streams and rivers, where they feed on algae, occurring on all continents except Antarctica. Only 3 species occur in the United States.