You are here: Home / Animals / Waterbuck 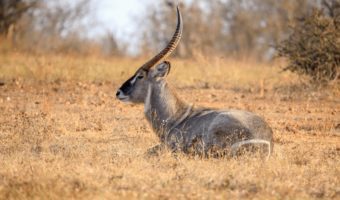 The waterbuck (Kobus ellipsiprymnus) is an antelope of the genus Kobus and the family Bovidae, first described by Irish naturalist William Ogilby in 1833. It is a large species, between 177 and 235 cm (70 and 93 in) long and a height between 120 and 136 cm (47 and 54 in). There are thirteen subspecies of waterbuck, which are grouped under two varieties.

The waterbuck resides in sub-Saharan Africa, in scrub and savanna areas along rivers, lakes, and valleys. These animals predominantly eat grasses, and exhibit great dependence on water, with no toleration of dehydration. They often form herds of between 6 to 30 individuals, made up of nursery herds with females and their offspring or bachelor herds.

Waterbucks got their name from their heavy dependence on water as compared to other antelopes, and their ability to enter into water for defence. They are listed as Least Concern on the IUCN Red List, but populations are on the decline due to poaching and human disturbance.

Waterbucks one of the six species of the genus Kobus in the family Bovidae. There were 37 subspecies of waterbuck originally recognized, but this was later reduced to just 13 subspecies. They have been recognized based on their coat color.

These subspecies are listed below: 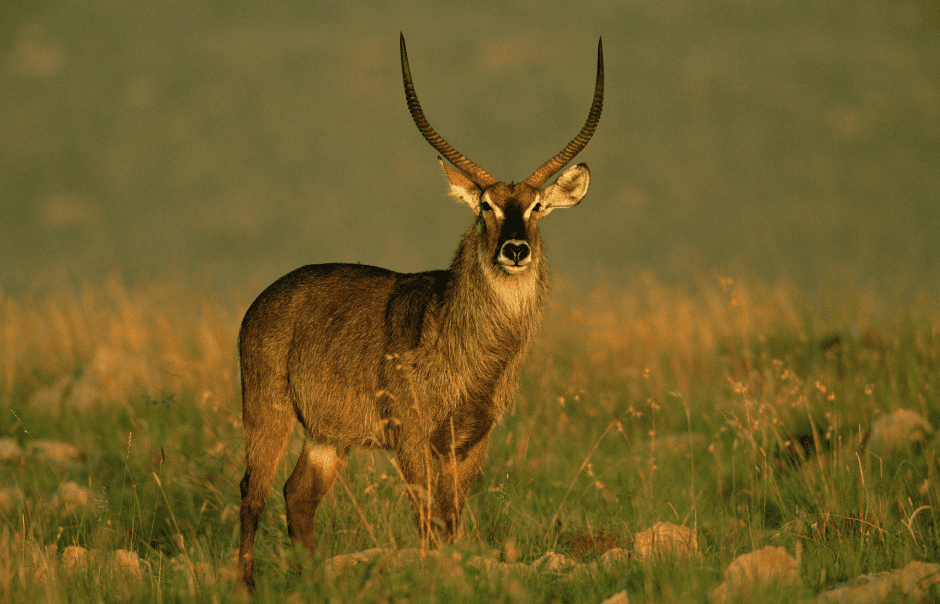 Of the six species in the genus Kobus, the waterbuck is the largest. These animals are sexually dimorphic, with males being larger than females. They can measure between 177 and 235 cm (70 and 93 in) in length and reach a height of between 120 and 136 cm (47 and 54 in).

Waterbucks are robust in build, with long bodies and necks and short legs. Males have long, spiral horns that curve backward, then forward, and are 55 to 99 cm (22 to 39 in) long. The length of the horns is determined by the age of the waterbuck.

The horns are composed of keratin. This is the same substance found in nails, hair, claws, and hooves. However, as opposed to deer, which antelopes are often compared to, these animals keep the same horns for their entire lives instead of shedding them every year.

They have coarse hair and a mane on their necks. They can range in color from gray to red-brown and their fur darkens with age. Males are also darker than females in color. The lower part of their legs are black with white rings above the hooves.

The waterbuck has a white muzzle and light eyebrows, and a cream-coloured patch (called a “bib”) on their throat.

The waterbuck has an average lifespan of around 18 years in the wild. In captivity, they have been known to live to up to 30 years old.

Waterbucks are herbivores and eat a variety of grasses, both medium and short in length. In fact, grasses make up between 70 to 95 percent of their diet, so waterbucks are predominantly a grazer. They have a great requirement for protein in their diet, but spend much less time eating leaves, small shoots, and fruits than other grazers.

The waterbuck is heavily dependent on water, which is one of the reasons for its name. In the hot weather, it cannot tolerate dehydration and therefore always makes sure it is close to a water source.

These animals mainly feed in the mornings and at night when it is cooler, and rest and ruminate the remainder of the hot day. 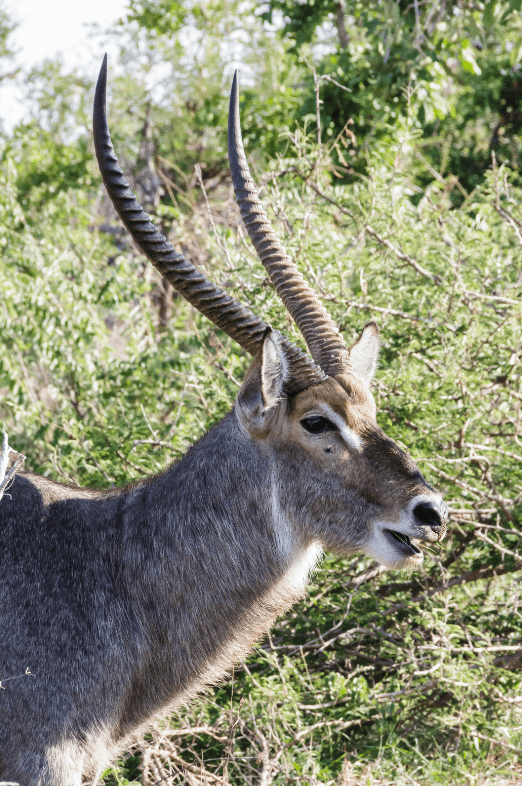 The waterbuck is a sociable animal that lives in herds made up of six to thirty individuals, although the herd size tends to increase in the summer. These herds are usually either made up of nursery herds with females and their offspring, bachelor herds or territorial males.

As soon as young males start developing horns, which happens at around seven to nine months of age, they are chased out of the herd by territorial bulls. These males then form bachelor herds and may roam in female home ranges.

Males start exhibiting territorial behavior at around the age of 5, but are most dominant between the ages of 6 to 9. After the age of ten years, males lose their territorial nature and replaced by a younger bull, following which they recede to a small and unprotected area.

They mark their territory with dung and urine, and use several kinds of display, including revealing the white patch on the throat and between the eye. While females very infrequently fight, fighting between males is common and can result in death.

Females have no established rank order in their herds. Despite the fact many female herds are made up of nurseries, female waterbucks are most commonly found alone or in pairs, and it is believed that herds of waterbuck are random meetings of individual waterbucks.

Near the equator, waterbuck breeding takes place throughout the year, with births at their peak in the rainy season. In the south of Sahara, however, the mating season lasts four months, but can extend for even longer periods in some areas. The defassa and common waterbucks can have bordering ranges, and when this happens, they often interbreed.

The gestation period of the waterbuck lasts seven to eight months, and females give birth to one calf. Being one of the heaviest antelopes, newborn waterbucks typically weigh 13.6 kg (30 lb), and they can stand on their feet within a half-hour of birth. Males tend to grow faster than females, and horns begin to form on males at 8 to 9 months old, which marks their separation from the females.

After birth, calves are kept hidden for two to three weeks up to two months. They are weaned at around 8 months old. Females are very protective of their calves and will fight off any intruders.

Waterbucks are slower in maturation than other antelopes, with males becoming sexually mature at around six years old. Females mature quicker, at around two to three years old, and may conceive their first child at two and a half years old.

Waterbucks reside in sub-Saharan Africa, but the particular areas in which they live depend on the subspecies. Those in the ellipsiprymnus group are found throughout southeast Africa, while those in the defassa group are found in northeastern, central, and western Africa. While the waterbuck used to be rather widespread, their numbers have now decreased in most areas.

Because waterbucks cannot tolerate dehydration, they reside very close to water sources. Their main habitats include savanna grasslands, gallery forests, and riverine woodlands. These areas do not just provide water, but also provide suitable food for them and areas to hide from predators.

The size of a waterbuck’s home range depends on the quality of the habitat, population, and the age and fitness of the waterbuck. Waterbuck that are in good health and are younger have the largest ranges. The home ranges of females may overlap.

Females have home ranges stretching over 200 to 600 hectares, while territorial males hold territories of 4 to 146 hectares in size. 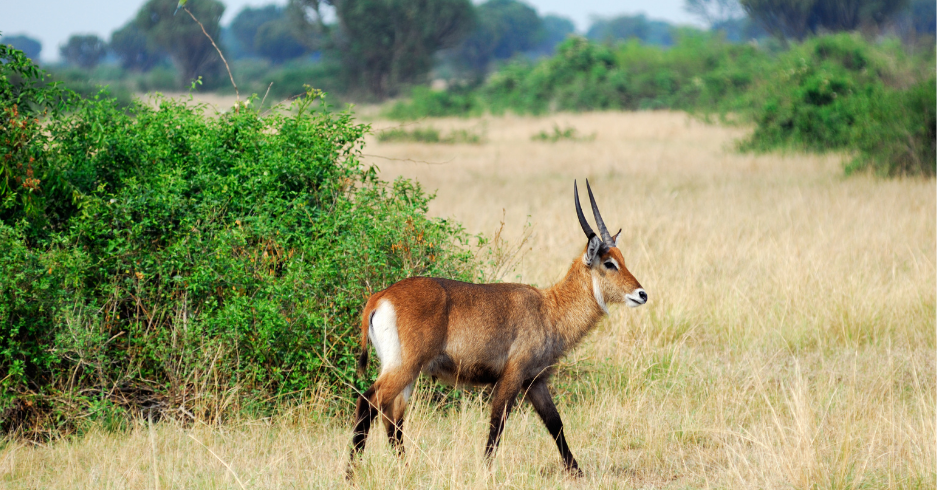 The biggest threats to the waterbuck are habitat loss and fragmentation, caused by human interference. As more and more land is used for road building, settlements and expanding agriculture, there is less and less land for the waterbuck to live on. Waterbucks are also hunted for sport in Africa.

Aside from humans, the main predators of the waterbuck are hyenas, lions, leopards, hunting dogs, cheetahs and crocodiles. They may run for cover when alarmed, but males will also often attack predators.

Waterbucks are important to the tourism industry in Africa. Although not one of the big five, they are still an animal to be spotted by tourists out in the wild. They are also found in zoos across the world.

What is the difference between the ellipsiprymnus waterbuck and the defassa waterbuck?

There are two main differences between the two main subspecies of waterbuck — their coat color, and their location. The common waterbuck is found throughout southeast Africa, while those in the defassa group are found in northeastern, central, and western Africa. That being said, they can actually be found in areas together, in which interbreeding can take place.

Their fur is different, too. While they both have a shaggy brown¬-gray coat, the common waterbuck has a conspicuous white ring encircling a dark rump, while the defassa has wide white patches on either side of the rump.

Aside from this, the two subspecies group look fairly similar and can be difficult to distinguish.

How big are waterbuck?

Do waterbuck spend a lot of time in water?

Despite their name and their ability to spend time in water, it is actually thought the waterbuck doesn’t like being in water all that much. They have the ability to secrete a greasy substance onto their coat, which helps to waterproof them. They will only really enter water if they are trying to get away from a predator.

The main reason a waterbuck has the word “water” in its name is its large dependance on drinking water to avoid dehydration. These animals are not well adapted to dehydration, despite living in a very hot climate, and therefore need to live very close to a water source to ensure they can access it at all times.

Aside from the waterbuck, there are 90 other species of antelope, which make up a large amount of the 140 or so known species of the Bovidae family. More species of antelope are native to Africa than to any other continent, almost exclusively in savannahs, with 25 to 40 species co-occurring over much of East Africa. Some species also live in Asia.

About 25 species are rated by the IUCN as Endangered, with the main threats being habitat loss, competition with cattle for grazing, and trophy hunting.