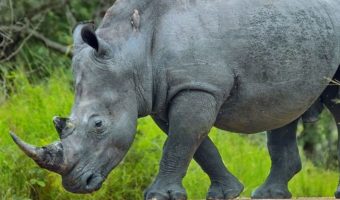 The White Rhinoceros is well known for its wide mouth used for grazing and for being the most social of all rhino species. 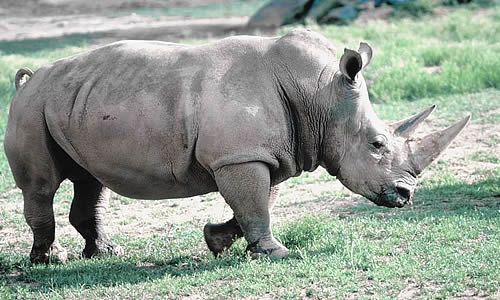 White rhinos have almost no hair. They have a squared (not pointed) upper lip, a longer skull and less sharply defined forehead and a more pronounced shoulder hump than the Black rhino which supports its large head. White rhinos have two horns, the front one averaging 60 centimetres long, but occasionally reaching 150 centimetres.

The White rhino is a dull grey color, however, because they love to wallow in mud, their skin can become brownish or take the color of the mud they wallow in.

Despite their huge size and bulkiness, White rhinos can run as fast as 40 miles per hour. They are very agile too and can turn quickly in a very small space. The White rhino is an ungulate animal, with hoofs that have three toes on each foot. They are more closely related to horses (who are also ungulates) than hippos are.

The White rhino lives in Africa – same as the Black rhino. The White rhinos habitat is tropical and subtropical grasslands, savannas and shrub lands.

One interesting fact about the White rhino is that, it is a herbivore and it can eat plants that are toxic to other animals. If it was not for these type of rhinos, the African plains would be over-run with these pesky toxic plants. Because the White rhino has a wider mouth, it tends to be a grazing animal. It feeds on grass and can eat grass faster than you could mow it. The White Rhinoceros is capable of going 4 or 5 days without water.

The White Rhinoceroses tend to group in herds of one to seven animals, although they are usually solitary animals.

With their poor eyesight, white rhinos will charge first and then see if there is anything to worry about after. White rhinos rely on their sense of smell and hearing which is well developed. Because of this feature, they have been called, irritable and clumsy animals – this could not be further from the truth. White rhinos use their ears, nostrils, posture and a very complex breathing system for communication and expression. (A bit like morse-code).

The white rhino tends to avoid the heat during the day, in which it will rest in the shade. It is therefore usually active early mornings, late afternoon and during the evening. During peaks of heat, the White rhino cools and rids itself of ‘ectoparasites’ (external parasites) by bathing in mud in shallow pools. Adult males can spend almost their entire life in these areas, unless water is unavailable, in which case they will go off to a drinking site every 3 – 4 days. 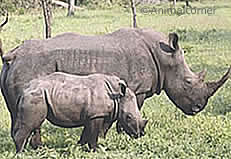 The gestation period of the female White rhino is 15 – 16 months. A single calf is born after this time and weighs around 150 pounds.

If there is an unpredicted disturbance, the calf will always run in front of its mother. 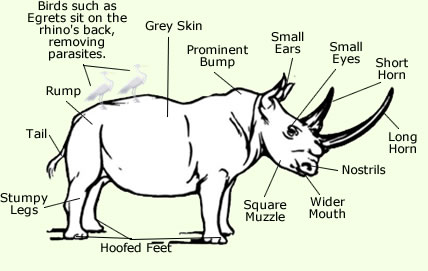 There are two subspecies of White Rhinos; as of 2005, South Africa has a Southern White Rhino (Ceratotherium simumssp. simum) population of about 11,000, making them the most abundant subspecies of rhino in the world. Wild-caught southern whites will readily breed in captivity given appropriate amounts of space and food, as well as the presence of other female rhinos of breeding age. For instance, 91 calves have been born at the San Diego Wild Animal Park since 1972. However, for reasons that are not currently understood, the rate of reproduction is extremely low among captive-born southern white females.

There are also two White Rhinos in Livingstone, Zambia (in the Mosi-o-tunia zoological park).

The Northern White Rhinoceros (Ceratotherium simum cottoni), formerly found in several countries in East and Central Africa south of the Sahara, is considered Critically Endangered, while its southern relative is currently the most abundant of all rhino species known today. Their wild population has been reduced from about 500 in the 1970s to only about 4 today.

Why is it called a ‘White Rhino’ when it is not ‘white’?

So the rhino with the wide mouth ended up being called the White Rhino and the other one, with the narrow pointed mouth, was called the Black Rhinoceros. The wide mouth was adapted to cropping large swaths of grass, while the narrow mouth was adapted to eating leaves on bushes. A White Rhinos skin color is quite similar to that of the Black Rhino.

White rhinos tend to have a calmer temperament than the Black rhino – they are not so aggressive. However, because they like to graze on grasslands they are more vulnerable to poachers hunting for horns than the highly-strung black rhino. It is thanks to conservationists in Kenya that the White rhino has been re-introduced and allowed to breed and increase their numbers. However, all five species of rhino are classed as an endangered species.

White rhinos have a hump of muscle on their necks and shoulders to hold up a head that can weigh 2,000 pounds (907 kilograms)!Rhinos may look indestructible, However, their skin is actually quite sensitive, especially to sunburn and biting insects. That is why they like to wallow in mud.Egrets and other birds can be found resting on rhinos backs, feeding on the species external parasites, mainly ticks.The Egrets will make a loud noise and warn the rhino if danger is near.