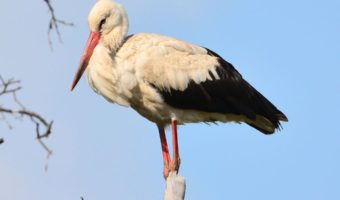 The White Stork (Ciconia ciconia) is a large wading bird that belongs to the family: Ciconiidae.

White storks nest in central and eastern Europe, spending the winter in Africa. About one quarter of the population of white storks live in Poland.

Use the information below to find out more about the White Stork’s characteristics, habitat, diet, behaviour and reproduction.

The white stork is a distinctive large wading bird which has a white plumage with black flight feathers and wing coverts. The black coloration is caused by the pigment melanin and carotenoids in their diet.

Adult white storks have long pointed red beaks, long red legs with partially webbed feet on the end and a long, slender neck. They have black skin around their eyes and their claws are blunt and nail-like. Males and females are identical in appearance, however, males are slightly larger in size. The feathers on the chest are long and form a ruff which is sometimes used when performing courtship displays.

The white stork’s wings are long and broad which enables the bird to soar easily on air thermals. The storks wingbeats when flapping, have a slow but regular pattern. Like most wading birds, white storks are a spectacular sight when soaring through the air, with their long necks out-stretched forwards and their long legs out-stretched backwards well beyond the end of its short tail. They flap their huge, broad wings as little as possible to save energy.

On ground, the white stork walks at a slow steady pace with its head stretched upwards. When resting, it tends to hunch its head between its shoulders. The white storks primary flight feathers moult yearly and are replaced during the breeding season.

The white stork is completely diurnal (active during the day). Its preferred feeding grounds are shallow wetlands, grassy meadows and farmland. The white stork is a carnivore and feeds up on a variety of animal from both the ground and from shallow water. Prey includes amphibians, reptiles such as lizards, snakes and frogs, insects, fish, small birds and mammals.

White storks are vocal birds who produce a noisy bill-clattering sound made by rapidly opening and closing their beaks which is amplified by the throat pouch which acts as a sound box. Young storks produce croaks, whistles and whines when begging for food and also begin the typical beak clattering.

White storks are gregarious birds who flock in their thousands when on long distance migration routes and when wintering in sub-saharan Africa.

When migrating between Europe and Africa, the white stork avoids crossing the Mediterranian Sea and instead flies via the Levant in the east or the Strait of Gibraltar in the west. This is because the air thermals do not form over the Mediterranean Sea on which it depends upon for long flights. Migrating White Storks use the uplift of air thermals to reduce the effort of long distance flying and therefore able to fly further with less fatigue.

White Stork nests are built by mating pairs. The nests are large, solidly constructed platforms made from sticks and are built in trees in loose colonies close to water sources. Each nest measures 1 – 2 metres (3.3 – 6.6 feet) in depth, 0.8 – 1.5 metre (2.6 – 4.9 feet) in diametre, and 60 – 250 kilograms (130 – 550 pounds) in weight. Nests may be used for several years. Several other bird species often nest within the large nests of the White Stork such as Sparrows, Tree Sparrows and Common Starlings.

The White Stork is famous for building its large stick nests on top of buildings and other structures when suitable trees are unavailable.

The White Stork breeds in larger numbers in areas with open grasslands, particularly grassy areas which are wet or frequently flooded, and less in areas with taller vegetation cover such as forests and shrublands. Non-breeding birds gather into groups of 40 – 50 during the breeding season.

Most White Storks are monogamous and pair for life. Female storks lay 2 – 5 chalky-white eggs which are laid at two day intervals. Eggs hatch after 33 – 34 days of incubation. The incubation period is shared between both parents.

After hatching, both parents take turns to feed the chicks. Food is placed on the edge of the nest by the parents but water is provided by regurgitation.

When newly hatched, young white storks have pinkish legs and a small black beak with a brown tip. young storks have two successive coats of down. Its body is firstly partly covered with short, sparse downy feathers which are whitish in color which are replaced after around a week with a fluffy white down. Flight feathers appear after 3 weeks along with black scapulars (shoulder feathers).

The chicks fledge after about 2 months and usually begin breeding when they are 3 – 5 years old. By this time, the young storks plumage is similar to that of the adults.

The White Stork is classed as ‘Least Concern’ by the IUCN. The White Stork is one of the species to which the Agreement on the Conservation of African-Eurasian Migratory Waterbirds (AEWA) applies. However, threats to the white stork include the continued loss of wetlands, collisions with overhead power lines, use of persistent pesticides (such as DDT – dichlorodiphenyltrichloroethane – a synthetic pesticide) to combat locusts in Africa, and largely illegal hunting on migration routes and wintering grounds.

Did you know this about the White Strok?

According to northern European legend, the stork is responsible for bringing babies to new parents. The legend is very ancient, but was popularised by a 19th century Hans Christian Andersen story called ‘The Storks’. German folklore held that storks found babies in caves or marshes and brought them to households in a basket on their backs or held in their beaks. These caves contained ‘stork stones’. The babies would then be given to the mother or dropped down the chimney. Households would notify when they wanted children by placing sweets for the stork on the window sill.

The White Stork is a popular motif on postage stamps, and it is featured on more than 120 stamps issued by more than 60 stamp-issuing entities.

Storks have little fear of humans if not disturbed, and often nest on buildings in Europe. In Germany, the presence of a strok nest on a house was believed to protect against fires. They were also protected because of the belief that their souls were human.

The Hebrew word for the White Stork is chasidah meaning ‘merciful’ or ‘kind. Greek and Roman mythology portray storks as models of parental devotion, and it was believed that they did not die of old age, but flew to islands and took the appearance of humans.