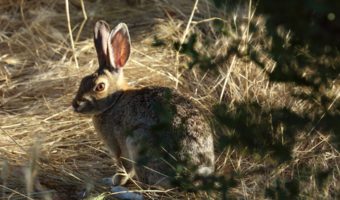 Rabbits (Orytolagus cuniculus) originated from Spain and South-West France. The rabbit was brought to England in the 12th century AD by the Normans and kept in captivity in warrens as a source of meat and fur.

Many escaped into the wild and eventually become so common that farming them was no longer economic.

Because of their fast breeding, a diet of virtually any vegetable matter and persecution of predators, the rabbit slowly established itself in the wild in Britain, despite originally favouring a warmer, drier climate.

There are seven different genera in the family classified as rabbits, including the European rabbit (Oryctolagus cuniculus), Cottontail rabbit (genus Sylvilagus; 13 species), and the Amami rabbit (Pentalagus furnessi, endangered species on Amami Oshima, Japan). There are many other species of rabbit and these, along with pikas and hares, make up the order Lagomorpha. All breeds of domestic rabbit originate from the European.

In the 1950s, the disease myxomatosis was introduced to curb their numbers and the rabbit almost became extinct, however, it is once again a common animal of the British countryside although it can be a serious pest for farmers for eating and damaging crops.

The main predators of rabbits are the stoat and the fox, although young rabbits also fall to birds of prey and weasels.

The rabbit pre-breeding season population is estimated to be 40 million. 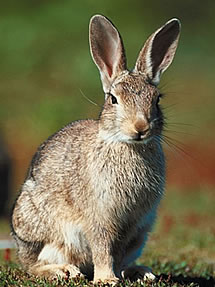 The male is called a buck and the female a doe. Rabbits generally measure 40 – 45 centimetres in length and have ears that measure 8.5 centimetres long. They have compact bodies with long, powerful hind legs.

A Rabbits fur is generally long and soft and is grey/brown in color and they have white underparts and a short tail. Their long ears of rabbits are most likely an adaptation for detecting predators. Wild rabbits are rather uniform in body proportions and stance.

The smallest is the pygmy rabbit (Brachylagus idahoensis), at only 20 centimetres in length and 0.4 kilograms in weight, while the largest rabbits grow to 50 centimetres and more than 2 kilograms.

Rabbits are ground dwellers that live in environments ranging from desert to tropical forest and wetland. The European rabbit occupies open landscapes such as fields, parks and gardens. Rabbits are abundant in grassland areas where the soil allows them to make extensive, well-drained burrows, but also where there are hedges or patches of woodland to give shelter and cover.

Rabbits are herbivores who feed by grazing on grass, forbs and leafy weeds, however, they will also eat all vegetable matter and gnaw tree bark in winter months. Rabbits re-swallow up to 80% of their faeces to use their food more efficiently in a process known as ‘refection’.

Rabbits graze heavily and rapidly for roughly the first half hour of a grazing period (usually in the late afternoon), followed by about half an hour of more selective feeding. In this time, the rabbit will also excrete many hard faecal pellets, being waste pellets that will not be reingested. If the environment is relatively non-threatening, the rabbit will remain outdoors for many hours, grazing at intervals. Rabbits are incapable of vomiting due to the physiology of their digestive system.

The European rabbit constructs the most extensive burrow systems, called warrens. Warren tunnels can be 1 – 2 metres long. The nest at the end of the tunnel is lined with grass, moss and belly fur. They use regular trails, which they scent mark with faecal pellets.

The European rabbit is the most social rabbit, sometimes forming groups in warrens of up to 20 individuals. Most rabbits are relatively solitary and sometimes territorial, coming together only to breed or occasionally to forage in small groups.

During territorial disputes rabbits will sometimes ‘box’ using their front limbs. Rabbits are active throughout the year, no species is known to hibernate. Rabbits are generally nocturnal and they also are relatively silent. Other than loud screams when frightened or caught by a predator, the only sound signal known for most species is a loud foot thump made to indicate alarm or aggression.

Instead of sound, scent seems to play an important role in the communication systems of most rabbits. They possess well-developed glands throughout their body and rub them on fixed objects to convey group identity, sex, age, social and reproductive status and territory ownership. Urine is also used in chemical communication. When danger is perceived, the general tendency of rabbits is to freeze and hide under cover. If chased by a predator, they engage in quick, irregular movement, designed more to evade and confuse than to outdistance a pursuer.

Rabbits generally are able to breed at a young age and many regularly produce litters of up to 7 young, often doing so 4 or 5 times a year due to the fact that a rabbits gestation period is only 28 to 31 days. Newborn rabbits are naked, blind and helpless at birth. Mothers are remarkably inattentive to their young and are almost absentee parents, commonly nursing their young only once per day and for just a few minutes.

To overcome this lack of attention, the milk of rabbits is highly nutritious and among the richest of all mammals. The young grow rapidly and most are weaned in about a month.

Males (bucks) do not assist in rearing the kittens. The mother rabbit is able to become pregnant again 4 days after the birth of her kittens.

Domesticated Rabbits have an average lifespan of up to 9 years whereas wild rabbits have a life expectancy of less than 4 years.

Rabbit populations are increasing, as they are becoming immune to the myxomatosis virus. Rabbits become sexually mature after just four months and breed rapidly, so they can readily replace themselves.