You are here: Home / Animals / Wildebeest

Wildebeest are antelopes and belong to the bovidae family which also includes cows, goats and sheep. Wildebeest are one of the most abundant large mammals in Africa and there is thought to be around 1.5 million migratory individuals in the Serengeti alone forming the greatest concentration of wild grazing animals on Earth. 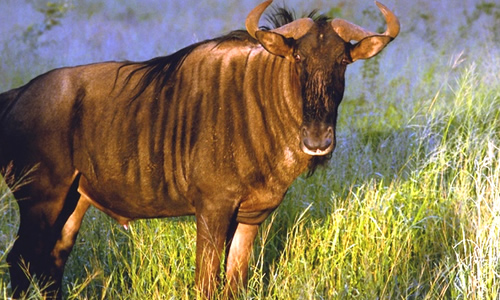 Wildebeest measure around 1.5 metres (5 feet) at shoulder height and weigh between 118 – 275 kilograms (260 – 600 pounds). They have large heads with a cow-like face, a shaggy mane and a pointed beard. Their sharp, curved horns measure up to 1 metre across. Both male and female have horns. The front part of their body is heavily built and they have slender hinds quarters and thin legs. They have a tail which measures 40 – 50 centimetres long.

The wildebeests preferred habitats are grasslands and savannas.

Wildebeest are grazing herbivores that feed upon grass and succulent plants. Massive herds will migrate for hundreds of kilometres in search of fresh grass which only grows after the seasonal rainfalls.

Wildebeest move around in massive herds, some stay in the same place while others are nomadic and are in constant search for new food sources. Many have to make dangerous crossings such as the Kenya Masai Mara. Migrating wildebeest must cross 2 wide rivers where Nile Crocodiles await them. When the crocodiles spot a weak wildebeest, they block its route back to shore and start to close in on it.

Wildebeest move around in huge herds probably because there is safety in numbers. The bigger the group, the less risk an individual faces of being picked out by predators. Predators do follow the herds around and will prey up on the young and the weak.

Herds of wildebeest drop tonnes of dung while on the move around but it is soon cleared up by swarms of Dung Beetles who roll the dung into balls and bury it before eating it or laying eggs in it. Sometimes herds of over 500 wildebeest will stampede and run at over 50 miles per hour and although destructive, the stampedes encourage new plant growth and soil renewal.

Wildebeest are most active in the mornings and late afternoons mainly resting during the heat of the night and also during the night. Wildebeest are noisy creatures and make vocalizations which include grunting calls, moans and explosive snorts.

Male wildebeest mature at 3 – 4 years and females at 2 – 3 years. When the males mature, they will set up their territories which they mark with faeces and secretions emitted from their face and hoofs. They defend it from other males and attempt to mate with females entering their areas.

Mating activity is seasonal and is usually timed so that the majority of calves are born close to the beginning of the rainy season when new grass is plentiful. Up to 500,000 calves are born in February and March each year, at the beginning of the rainy season. A single calf is born after a gestation period of 8 and a half months each year. Unlike other antelopes, the female does not need to give birth in a secluded location, she will give birth in the centre of the herd if need be.

Calves can stand and run within minutes of being born but they must move with their mothers to have any chance of surviving as they are very vulnerable to lions, cheetahs, wild dogs and hyenas. Calves are suckled by their mothers for 6 months although they are able to eat grass after 10 days. Males leave the herd when they are one year old to form groups of bachelors.

The life span of a wildebeest in the wild is 20 years.

Wildebeests are abundant and although numbers have increased in the Serengeti, numbers have declined in other areas such as south west Botswana due to competition with livestock. The destruction of crops have prompted farmers to kill wildebeests and also set up long fences to prevent the animals from migrating to wetlands when there are seasonal droughts. Continuing survival is dependant on conservation efforts.