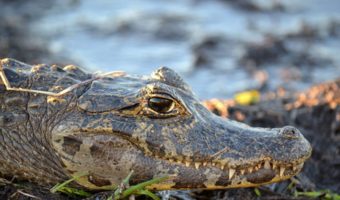 The Yacare Caiman is found in a variety of habitat types, similar to the Common Caiman (Caiman crocodilus), which include wetlands, rivers and lakes.

The Yacare Caiman is similar in general design to the Common Caiman (Caiman crocodilus), reaching lengths of 2.5 to 3 metres. Like the common caiman, its scales have well-developed osteoderms (bony deposits forming scales, plates or other structures in the dermal layers of the skin). The less ossified (bone formation) flanks are used in the skin trade.

The common name ‘Piranha caiman’ is derived from its more visible display of teeth, an unusual characteristic whereby certain large teeth in the lower jaw may protrude through the top surface of the upper jaw.

The Yacare Caimans main diet consists of aquatic invertebrates (particularly snails) and vertebrates such as fish with the occasional snake.

The female Yacare Caiman constructs a mound nest into which 21 to 38 eggs are usually laid. Peak egg laying occurs during the middle of the rainy season.

Females guard the nest during incubation, however, this has been shown to be influenced by the effects of hunting pressure – females in areas of increased hunting pressure are more wary and tend to abandon the nest once eggs are have laid. Hatching occurs in March.

Population survey data are extensive throughout the species’ range, and shows that numbers are generally depleted. While protected, these measures are rarely effectively enforced.

Removal of the Endangered Species Act in the US would severely affect this species. Illegal hunting during the 1970s and 80s is the primary reason for these low numbers, and organised poaching (e.g. Brazil) still remains one of the major threats to the species along with habitat destruction.

Like the Common Caiman (Caiman crocodilus), the Yacare Caiman is able to breed relatively quickly in comparison with other species of crocodilians. This has helped to reduce the effects of hunting pressure.

Sustainable yield programs are in operation in three countries, with the fourth (Paraguay) in the process of setting up such a program.

Cropping of wild populations occurs in Bolivia, and ranching and farming programs are underway in both Brazil and Argentina.