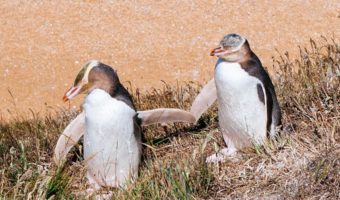 The Yellow-eyed Penguin or Hoiho is a penguin found in New Zealand, on the south-east coast of South Island, Foveaux Strait and Stewart Island/Rakiura and Auckland and Campbell Islands.

The Yellow-eyed penguin is the third largest penguin behind the Emperor penguin, the largest and the king penguin being the second largest.

Rarest of all the penguins, the Yellow-eyed penguin is unique in appearance and behaviour. These solitary birds have experienced population declines in the last 50 years due to habitat loss and predation by introduced species. 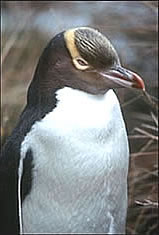 There is a band of bright yellow running from its eyes around the back of the head. The juvenile has a greyer head with no band and their eyes have a grey iris.

Yellow-eyed penguins spend most of their day at sea, feeding in the warm New Zealand waters. Amazing underwater swimmers, they can dive to depths of 400 feet and are adapted to holding their breath for up to four minutes. Yellow-eyed penguins may travel up to 20 miles from shore to feeding grounds at the edge of the Continental Shelf.

Yellow-eyed penguins are forest nesting birds, preferring to nest in a secluded site backed up to a bank, tree or log. Coastal deforestation, however, has forced these penguins to seek refuge among tall shore grasses where adults, eggs and chicks frequently become prey to introduced dogs, cats, stoats, ferrets and rats.

Although they nest in loose ‘colonies’, mated Yellow-eyed penguins seek solitude, often nesting out of sight of each other.

During their lengthy breeding season, which runs from mid-August to mid-March, the penguins come ashore in the evening and waddle clumsily up the beach to their inland nest sites. In September to mid-October, females lay two eggs in nests of sticks and coarse grass which provide shelter from the hot sun and protection from storms.

The incubation period is about 45 days and both parents keep watch over the eggs. The average hatching period on mainland New Zealand is the beginning of November. Both eggs usually hatch. At this point, one parent remains with the chicks while the other parent goes to sea to hunt for food. Unusual among penguins, the chicks stay with the parents and do not form ‘crèches’ (nursery groups) as most other penguin chicks do. Chicks fledge from mid-February to mid-March and are then able to head out to sea on their own to feed.

Despite being swift swimmers, Yellow-eyed penguins can fall prey to seals and sharks at sea, though by far the biggest threats to their survival are on land. Significant protection measures have been introduced lately to curb population losses, including legislation aimed at reducing the numbers of non-native mammalian predators and slowing habitat loss.

The current status of the Yellow-eyed penguin is endangered, with an estimated population of 4,000. It is considered one of the worlds rarest penguin species. The main threats include habitat degradation, introduced predators as well as environmental changes. It is thought to be the most ancient of all living penguins.