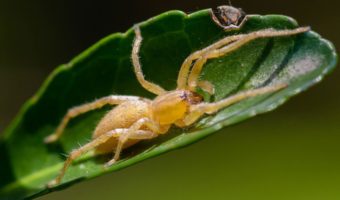 Yellow Sac Spiders are light yellow to pale yellowish green, sometimes with a orange-brown stripe on top of the abdomen. The cephalothorax (fused head and thorax) of the Yellow Sac Spider is orange brown to reddish and the abdomen is pale yellow to light grey. An adult female sac spiders body is typically 1/4 to 3/8 inches long and its leg span is up to 1 inch.

Males are more slender, with a slightly larger leg span. The first pair of legs is longer than the fourth. Yellow Sac Spiders have eight similarly-sized dark eyes arranged in two horizontal rows.

Yellow Sac Spiders take shelter in flattened silk tubes during the day and move about to hunt during the night. Yellow Sac Spiders often live in houses and can frequently be found crawling upon walls or other vertical surfaces. Yellow Sac Spiders construct a silken tube or sac in a protected area, such as within a leaf, under landscape timbers or logs, or at the junction of a wall and ceiling and they use this sac as their daytime retreat. This is how the Yellow Sac Spiders derives its common name, sac spider. These spiders do not build webs.

Yellow Sac Spiders are active hunters, emerging at twilight from their silken sac to seek out prey. Yellow Sac Spiders prey is a wide diet of arthropods, including spiders larger than themselves and even their own eggs. Outdoors, they often search among foliage, waving their first pair of legs in front of them as they rapidly climb among leaves and stems of plants. Because of their active searching habits, Yellow Sac Spiders often enter homes, particularly during early autumn when their food supply decreases.

After mating, females Yellow Sac Spiders produce around 5 egg sacs each containing 30 to 48 eggs. The eggs are laid in a loose mass and covered with a thin coat of spun silk. The small, white, paper-like sacs are often found in easily overlooked locations, along ceilings and corners, or behind pictures and shelves. The female may guard these egg sacs until the eggs hatch. Eggs are usually laid in autumn and the spiderlings emerge during the following spring. The female may produce several egg masses during her lifetime. Adults can be found from April through November, however, in the hottest months small spiders makes up the largest proportion of the population.

The chelicerae of Yellow Sac Spiders are very powerful and the fangs can penetrate human skin quite easily. Most bites on humans occur when people are gardening or performing other kinds of outdoor activities. The venom has mild and local cytotoxic (a toxic effect on cells) and neurotoxic (poisonous to nerve tissue, as to the brain or spinal cord) effects. No fatal incidents from encounters with the yellow sac spider have ever been recorded. It has been noted that a large number of bites attributed to the Brown Recluse spider may actually be the result of yellow sac spider bites.