Baltra Island or Isla Baltra is a small island of the Galapagos Islands. Visitors to the Galapagos Archipelago often visit here first, as this is where the main airport, Seymour Airport, is situated. Until 1986, Baltra was the only airport serving the Galapagos. Now one of two airports, most flights operating in and out of Galapagos still fly into Baltra.

The airport was built by the Americans during World War II. Baltra sits just 1km off the northern coast of Isla Santa Cruz and has no real tourist attractions. The island has an area of 27 square kilometres. Access to Santa Cruz Island is across the Itabaca Channel. The island serves as a small navy base for Ecuador.

Baltra is currently not within the boundaries of the Galapagos National Park. The Galapagos Land Iguana is the subject of an active re-introduction campaign on the island. 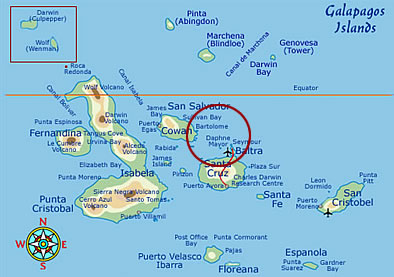 The Land Iguana became extinct on Baltra in 1954. However, in the early 1930s, William Randolph Hearst (a leading newspaper publisher), had translocated a population of Galapagos Land Iguanas from Baltra to North Seymour Island, a smaller island just a few hundred metres north of Baltra. The iguanas survived and became the breeding stock for the successful Charles Darwin Research Station captive breeding programme in the 1970s which reintroduced the iguanas to Baltra and other islands.