Some beetles can display extremely intricate behaviour when mating. Smell is thought to play an important part in the location of a mate.

Conflict can play a part in the mating rituals of some species such as burying beetles where conflicts between males and females rage until only one of each is left, this ensures reproduction by the strongest and fittest. Many beetles are territorial and will fiercely defend their small patch of territory from intruding males.

Beetles will pair for a short time, however, in some cases pairing can last for several hours. During this period, sperm cells are transferred to the female to fertilise the egg.

Parental care varies between species, ranging from the simple laying of eggs under a leaf to certain scarab beetles, which construct underground structures complete with a supply of dung to house and feed their young. Other beetles are leaf rollers, biting sections of leaves to cause them to curl inwards, then laying their eggs where they are protected inside. 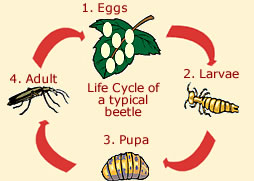 Beetles, like other insects, go through a complete process of metamorphosis in which it goes through four stages of development.

It begins with the female beetle laying hundreds of tiny, oval white or yellow eggs, usually on a leaf or in rotten wood. (Some female beetles keep their eggs inside of them and give birth to live larvae). It usually takes from 4 – 19 days for the eggs to hatch. They then enter into the ‘larval stage’.

At this stage, they will eat a tremendous amount of food and continue to grow, shedding its exoskeleton many times while it grows. Most beetles pass through 3 – 5 stages during the larval period and some can even have up to 30 stages whereas other beetles can have only 1 stage as larvae.

It then enters into the ‘pupal stage’ which can take up to 9 months and usually happens over the winter period. After pupating, an adult emerge, and there you have your beetle.

This beetle will then feed, mate and if it is a female, she will lay eggs for the beginning of another generation.

Beetles and their larvae have a variety of strategies to avoid being attacked by predators or parasitoids (an organism that spends most of its life attached to or within a single host organism which it ultimately kills and often consumes in the process). These include camouflage, mimicry (a situation where one organism, the mimic, has evolved to share common outward characteristics with another organism), toxicity and active defence.

Camouflage involves the use of coloration or shape to blend into the surrounding environment. Among those that exhibit this defensive strategy are some of the leaf beetles (family Chysomelidae), having green coloring very similar to their habitat on plant leaves. More complex camouflage also occurs, as with some weevils, where various colored scales or hairs cause the beetle to resemble bird dung.

Another defence that often uses color or shape to deceive potential enemies is mimicry. A number of longhorn beetles (family Cerambycidae) bear a striking resemblance to wasps, which fools predators into keeping their distance even though the beetles are in fact harmless.

Many beetle species, including ladybirds and blister beetles, can secrete distasteful or toxic substances to make them unpalatable or even poisonous. These same species often exhibit ‘aposematism’, where bright or contrasting color patterns warn away potential predators.

Large ground beetles and longhorn beetles may go on the attack, using their strong mandibles to forcibly persuade a predator to seek out easier prey. Others, such as bombardier beetles spray acidic gas from their abdomen to repel predators.