The Boreal or Taiga coniferous forests are the largest and coldest terrestrial biomes on the Earth. The boreal or taiga biome covers most inland countries mostly Alaska, Canada, Northern Europe, particularly Siberia and parts of the extreme northern United States.

The term, Boreal, is used to refer to the southern part of this biome, while Taiga (a Russian word meaning swampy moist forest) is used to describe the more barren areas of the Arctic tree line. Much of the boreal zone was previously glaciated, however, today some sections still have permanent frost (permafrost). The climate in the boreal/taiga biome is very cold with average annual temperatures of -50 degrees centigrade to 30 degrees centigrade (-58° fahrenheit to 86° fahrenheit) throughout the whole year. 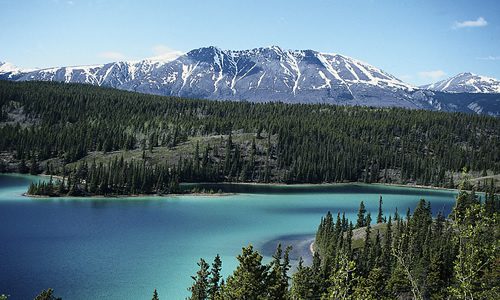 Precipitation (including rain, freezing rain, drizzle, snow, ice pellets and hail) varies from 20 centimetres to 200 centimetres per year. Winters are long and cold and summers are shorter, humid and warm/cool.

During the summer, with melting snow and low temperatures, there is very little water evaporation which means the ground is constantly damp, moist and swampy and although the growing season is very short (around 3 months), there is an explosive plant growth of dense vegetation.Snow may remain on the ground for as long as nine months in the northern most extensions of the taiga ecozone. It should be noted that this biome also incorporates parts of the alpine and tundra biomes.

Animals and birds that live in the Boreal Biome/Taiga Biome

The boreal/taiga biome is home to a number of large herbivorous mammals and smaller rodents. These animals have also adapted to survive the harsh climate. Some of the larger mammals, such as bears, eat during the summer in order to gain weight and then go into hibernation during the winter. Other animals have adapted layers of fur or feathers to insulate them from the cold.

Due to the climate, carnivorous diets are an inefficient means of obtaining energy. However, predatory birds (owls and eagles) and other smaller carnivores, including foxes and weasels, feed on the rodents. Larger carnivores, such as lynxes and wolves, prey on the larger animals. Omnivores, such as bears and raccoons are fairly common, sometimes picking through human garbage.

A number of wildlife species threatened or endangered facing extinction can be found in the Canadian Boreal forest including the grizzly bear and the wolverine. Habitat loss due to destructive development, mostly in the form of logging, is the main cause of decline for these species. The animals and birds below are featured in our World Wildlife section.