This biome is shaped by a Mediterranean climate of mild, wet winters and hot dry summers. 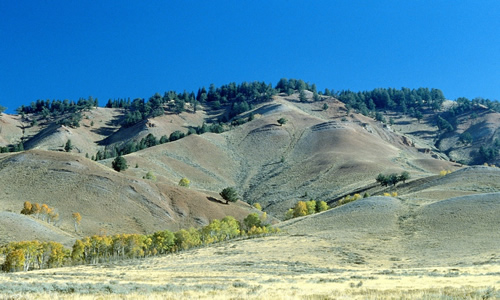 The Chaparral plant community consists of densely-growing evergreen scrub oaks and other drought-resistant shrubs. It often grows so densely that it is all but inaccessible to large animals and humans.

This biome only gets about 10 – 17 inches of rain per year and most of it comes in the winter. Because of the long period of dryness in the summer, only plants with hard leaves can survive, such as scrub oaks, chamiso shrubs, pines, cork and olive trees.

Many leaves are also hairy so they can collect the moisture out of the air and use it. Chaparral is one of the most fire-prone plant communities in North America because of heat and tropical storms. Droughts are also very common. Some plants have adapted even to the fires. Their seeds will lie dormant until there is a fire. Their seed casings will crack and the seed will sprout only then.

The chaparral biome has many different types of terrain. Some examples are flat plains, rocky hills and mountain slopes.

Animals that live in the Chaparral/Scrub Biome

The fauna is very interesting. Some of the adaptations of the chaparral fauna are that the animals do not require much water. The animals have learned to live in their biome by being nocturnal and are usually small. The animals are all mainly grassland and desert types adapted to hot, dry weather. Animals have adapted to this sparse and rough terrain by becoming agile climbers, foraging over larger areas and varying their diet to include the often scrubby brush lands.

Below is a list of animals that live in the Chaparral/Scrub biome. The animals below are featured in our World Wildlife section.