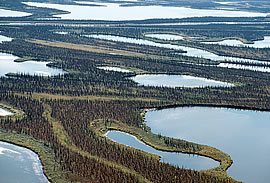 Wetland biomes include marshes, swamps and bogs and can be found all around the world except regions that are frozen all year round, eg. the Arctic and the Antarctic. Most wetland biomes are found near water sources such as rivers, lakes or coastal areas. Some develop in areas of grassy plains.

Bogs and swamps are flooded constantly, however, a marsh is wet only part of the year. A wetland is an area of land that contains soil that is saturated with moisture. The water content is either fresh, salt or mixed, depending on its location. Water content changes seasonally, seasonal wetlands tend to dry up in the summertime.

Wetland plants have adapted to the moist and humid conditions. Wetland plants are called Hydrophytes and include Water Lilies, Cattails, Tamaracks, Sedges and Mangroves. Evergreen trees also grow on wetlands as well as grasses, reeds and mosses.

Wetland biomes provide a safe and lush environment for many animals, birds and insects. Many amphibian and reptile species can be found in wetlands such as alligators, turtles, salamanders, toads and frogs. Water birds like geese, swans, herons and mallard ducks can also be found there. The wetlands biome also often hosts creatures like beavers, minks and rats, and sometimes larger mammals such as deer and moose will venture into wetlands for food and shelter. Fish and shellfish that lay eggs also hatch among the roots of plants. In many locations such as the United Kingdom, Norway and United States wetlands are the subject of conservation efforts and Bio diversity Action Plans.

Freshwater biomes cover around one fifth of the earth’s surface and are generally very low in salt (about 1% or less) or lack salt completely. There are two types of freshwater biomes – rivers and streams, and ponds and lakes. 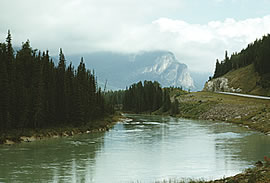 Many aquatic plants can be found growing along side rivers and streams and algae is usually present. Cattails, watercress and many types of grasses grow on marshy banks where their roots receive lots of moisture but are not washed away by the current.

Freshwater animals have adapted to living in rivers and cling to rocks using their suckers or slime to prevent them from being carried away by the currents. 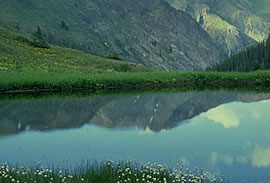 Ponds and lakes vary in size and are scattered around the world. The average depth of a pond or lake is around 10 feet. Ponds and lakes are home to many different species of animal that are not in danger of being swept away by currents. Insects, birds, frogs, turtles and around 700 species of fish can be found in freshwater biomes.

Precipitation (rain, sleet, hail, snow and other forms of water falling from the sky) and melted ice are major feeders of freshwater biomes. These biomes are responsible for over half the world’s drinking water. Mammals such as otters, badgers and minks inhabit freshwater biomes, reptiles and amphibians and fish such as trout and bass also live there. The earth’s freshwater biome and the species it supports are being seriously threatened by pollution from farm runoff, industrial discharges, recreational boating and fast food packaging. 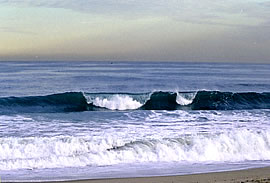 The Ocean biome is the largest biome as it covers 70% of the earth’s surface and is mostly salt water. The ocean biome supports more life forms than all other biomes combined. Scientist suggest that life forms may have began in the ocean biome around three million years ago.

The average temperature of all oceans is about 39 degrees Fahrenheit (3.8 degrees Centigrade). However, oceans in different parts of the world can have very different climates.

Tropical oceans near the equator are warmed by the sun whereby oceans in polar regions are very cold and have frozen ice on their surfaces and huge icebergs floating in them. However, the ocean surrounding the Galapagos islands is in complete contrast as the climate is tropical due to being positioned near the equator, yet the ocean climate is cold (read more about this in our Galapagos Wildlife section).

The ocean regions are separated into separate zones:

Inter tidal – this is where the ocean meets the land either on sandy shores or rocky coastlines. Many invertebrates, crustaceans, shorebirds and fish can be found here, as well as a variety of plant life including algae and seaweed.

Pelagic – this is further from the land and known as the open ocean. The flora includes surface seaweed, grasses and kelp and fauna includes fish and mammals such as whales and dolphins which feed on the abundant plankton.

Benthic – this zone is the area below the pelagic zone, sometimes called the ‘bottom of the sea’ or the ‘sea bed’, however, it is not as deep as the abyssal zone. The sea bed is covered with sand or silt and dead organisms. As the depth in this zone increases towards the abyssal zone, it becomes much colder as light from the sun cannot penetrate through the deep water. Flora is mainly seaweed. Fauna is abundant in different types of fungi, sponges, bacteria, worms, sea stars, anemones and fish as it is very nutrient-rich.

Abyssal – the abyssal zone is the abyssopelagic layer of pelagic zone that contains the very deep benthic communities near the bottom of oceans. It is usually called the ‘Abyss’ which is a Greek word meaning ‘bottomless sea. The abyssal depths range from 4,000 to 6,000 metres (13,123 – 19,685 feet) and remains in complete darkness constantly. Creatures that permanently inhabit the abyssal zone include the:

Black Swallowers (a 25 centimetre fish that has the ability to extend it’s stomach three times its size so that it can swallow fish bigger than itself),

Tripod Fish (named for the long extensions of its pelvic and lower caudal fins).

Deep Sea Angler Fish (named for their characteristic mode of predation, whereby a fleshy growth from the fish’s head (the esca) acts as a lure).

Giant Squid who grow to a tremendous size – 13 metres (43 feet) for females and 10 metres (33 feet) for males. These creatures are able to withstand the immense pressures of the ocean depths. All four zones have a great diversity of animal and plant species. It is said that the ocean biome contains the richest diversity of species even though it contains fewer species than there are on land. The key species that supports almost all other ocean life is the Phaeton, a tiny, shrimp-like creature that is barely visible to the eye. Many species of fish and marine mammals eat primarily phaeton which float freely in the ocean’s currents.