The skeletal anatomy of a bird 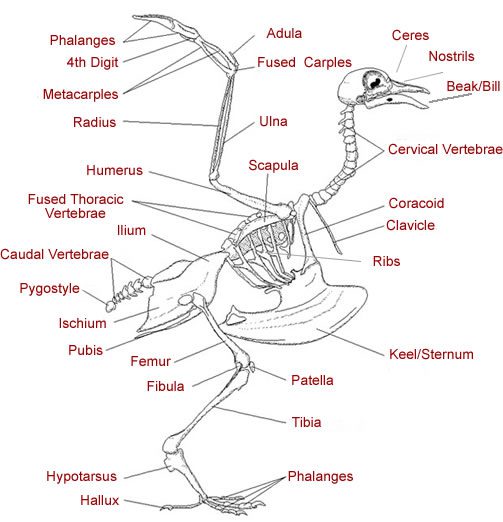 All birds have the same basic skeletal structure but with different variations in size and shape depending upon species. A bird skeleton is very unique whether the bird is flightless or adapted for flight. The skeletal structure is very lightweight and can appear fragile, however, it is actually very strong and robust. Most of the longer bones of the bird’s skeleton are hollow but reinforced through a honeycombed substructure of criss-crossing for structural strength.

When birds flap their wings, it requires much strength from large muscles which need to be solidly attached to the skeleton. Flying birds have a pronounced keel or sternum, the flight muscles are attached to this. Fused bones also helps the bird to withstand the stress of taking off, flying and landing. The keel is absent in flightless birds such as Penguins, Emus and Ostriches who also have solid bones instead of hollow ones.

The leg bones of birds are the heaviest, contributing to a low centre of gravity. This gives the bird a better balance, important in both flight and bipedal (two legged) locomotion. A bird’s skeleton comprises only about 5% of its total body weight.

The internal anatomy of a bird 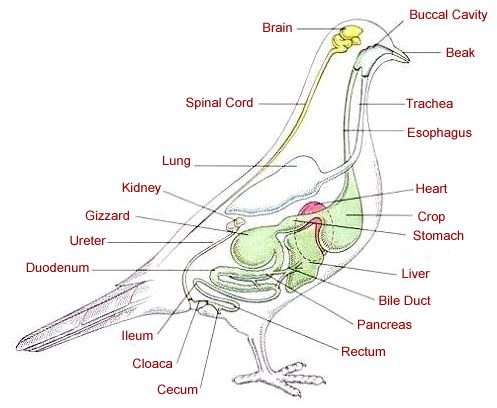 
A bird’s internal anatomy, particularly its respiratory system, differs from mammals in many ways. Bird respiration is much more efficient.

Because birds have a beak or bill and no teeth, they do not really chew their food and therefore have a specialised digestive tract.