You are here: Home / Blog / 10 Examples of Flightless Birds

Do you know what a kiwi is? How about an ostrich?

Chances are, if you’re not from New Zealand or Africa, you may not be familiar with these flightless birds. Flightless birds are fascinating creatures, and they come in all shapes and sizes.

There are many reasons why some birds are flightless. For example, some birds may have evolved to be flightless because they live in areas where there is no danger of being attacked by predators. Other birds may have lost the ability to fly because it was not needed for their survival. 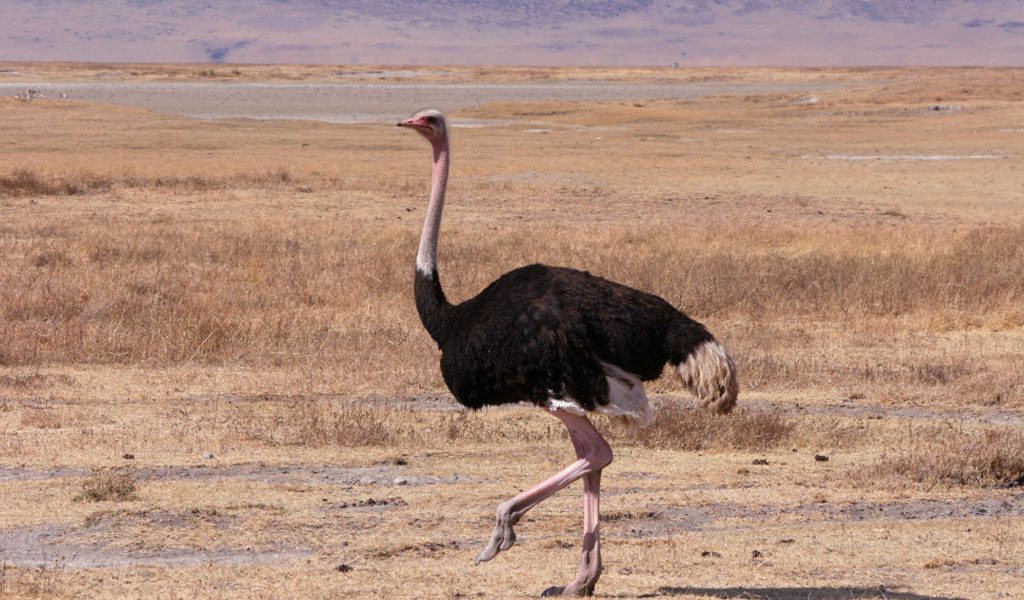 The Ostrich (Struthio camelus – meaning ‘camel-like’) is the world’s largest flightless bird which is native to the savannas and grasslands of South Africa. It has also been introduced to Australia. The ostrich is a member of the ratite (which means flightless bird) family of birds. It is the only living species in the family: Struthionidae and a member of the order:

Despite being flightless, Ostriches have small wings that are covered with fluffy feathers. The wings are too small to lift the Ostriches heavy bodies off the ground and into the air but are used as rudders when the bird is running to help it change direction. 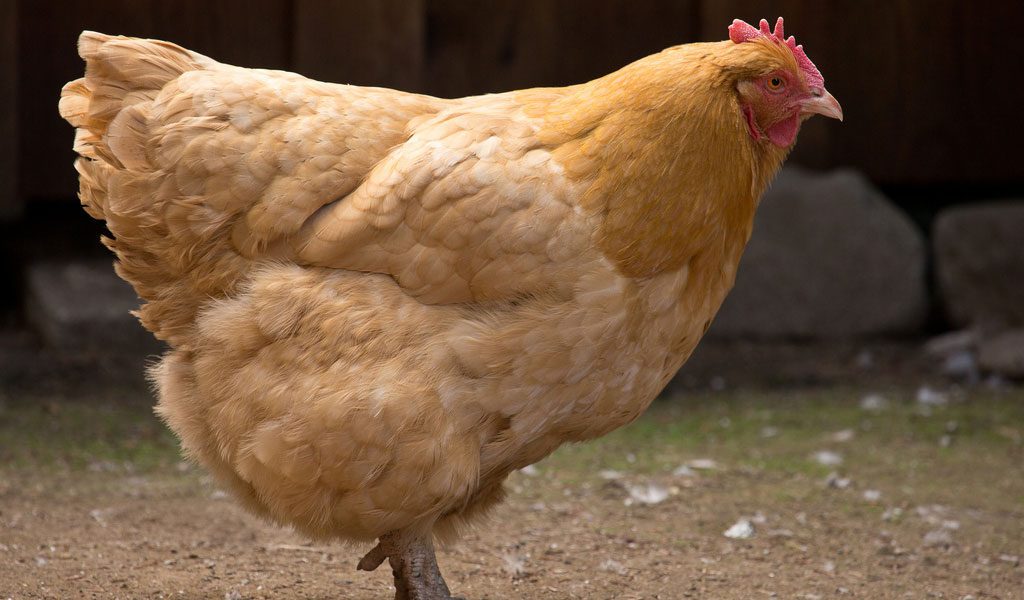 Chickens (Gallus domesticus) are domestic birds that cannot fly. There are over 150 different breeds of chicken that come in various colors, patterns and sizes. The chicken is believed to have descended from the wild Indian and south-east Asian Red Junglefowl which is biologically classified as the same species.

With a population of more than 30 billion, there are more chickens in the world than any other bird.

Although chickens are flightless birds, they do have a tendency to attempt flight. Chickens do this by running and flapping their wings. Unfortunately, they are not capable of staying airbourne. Chickens sometimes can fly for very short distances such as over fences. Chickens will sometimes attempt flight simply to explore their surroundings, however, they will especially fly in an attempt to flee when they perceive danger or pursued by a predator. 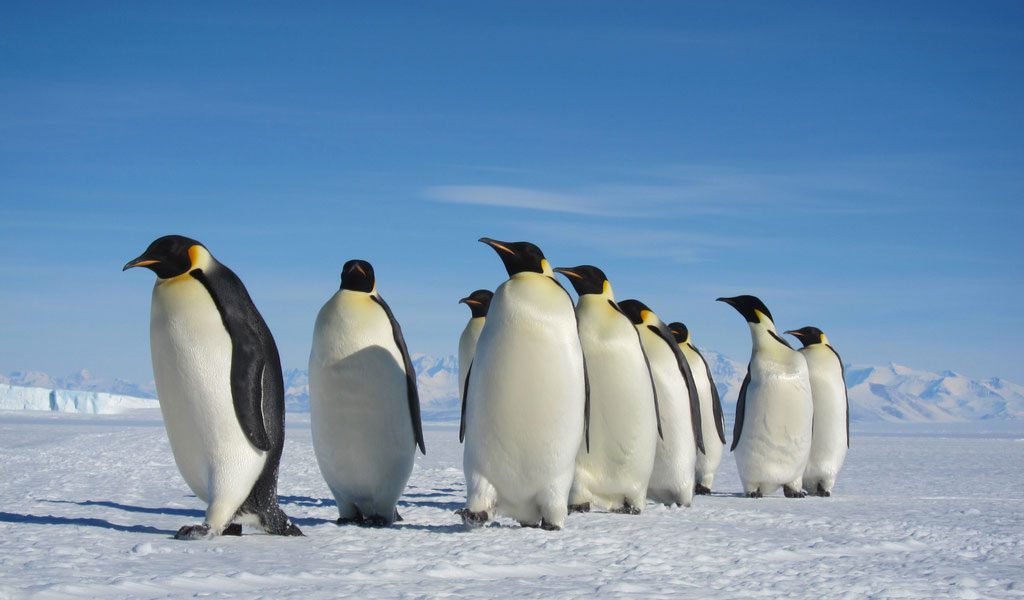 The Emperor Penguin stands 115 centimetres (45 inches) in height and weighs 35 – 40 kilograms (77 – 88 pounds) and is the tallest and heaviest of all living penguin species. It is the only penguin that breeds during the winter in Antarctica. Emperor Penguins typically live for 20 years, however, some records indicate a maximum life span of around 40 years.

Emperor Penguins have a big head, a short, thick neck, a streamlined shape, a short, wedge-shaped tail and tiny, flipper-like wings. Both male and female are alike, with blue-grey upper parts and blackish-blue heads adorned with large white and yellow ear patches.

Their under parts are mostly white but with the upper breast showing a pale yellow. The shape of their body helps them to survive. Emperor Penguins have short wings that help them to dive up to 900 feet to catch larger fish.

When they are in the water, they dive and flap their wings as if they are flying underwater. 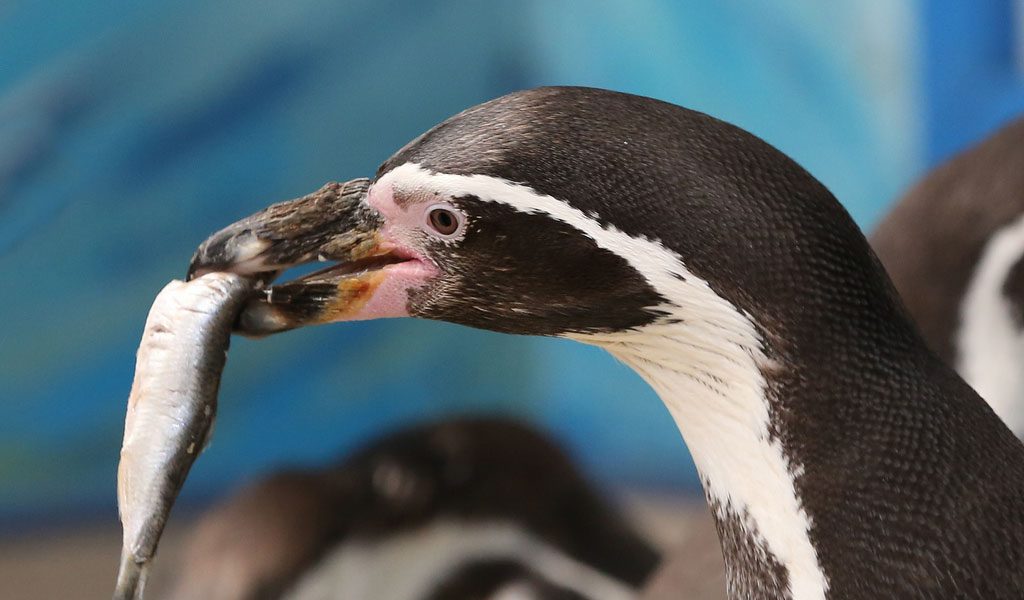 The Humboldt Penguin is a South American penguin, breeding in coastal Peru and Chile. Humboldt Penguins are medium-sized, black and white penguins, growing 65 – 70 centimetres tall. Humboldt Penguins have a black head with a white border running from behind the eye, around the black ear-coverts and chin, to join on the throat.

Humboldt penguins have a body made to swim. Using their strong wings, they ‘fly’ underwater, usually just below the surface, at speeds of up to 20 miles per hour (32 kilometres per hour). 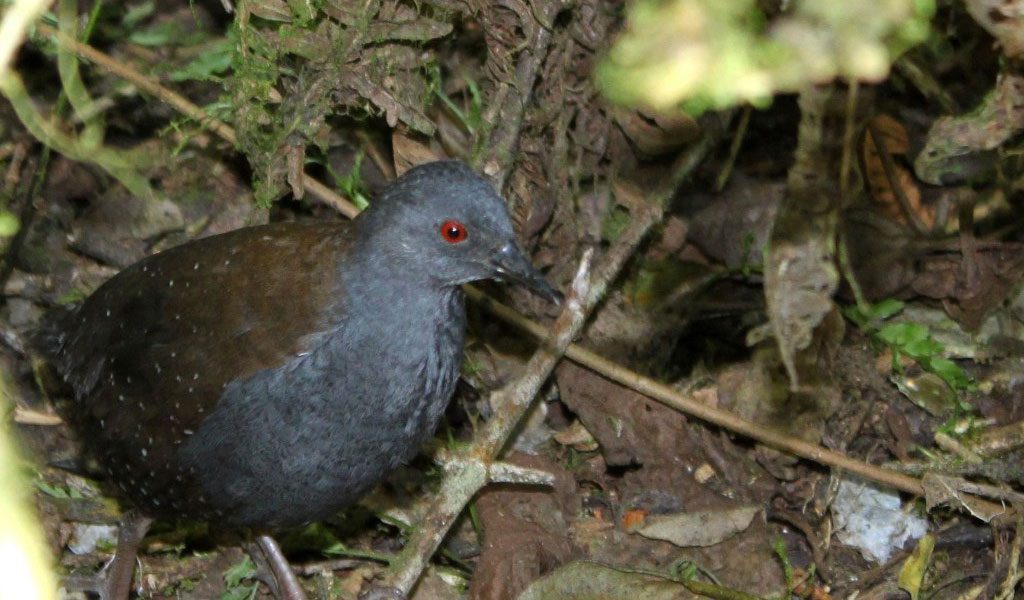 The Galapagos Rail Bird is a small rail endemic to the Galapagos Islands. It closely resembles the closely related Black Rail of The Americas. It has been threatened by introduced species, such as goats and cats and is considered vulnerable.

The Galapagos Rail Bird is a small (15 centimetres) nearly flightless ground living bird. It has dark plumage, black overall with a greyer head and breast, and white spots on the back. It has a scarlet eye, a black bill, and short, nearly useless wings. They are very vocal with a wide range of calls.

The Galapagos Rail Birds feed on invertebrates, mostly snails, isopods, dragonflies, bugs, ants, also taking berries and some seeds. They feed during the day, moving along the ground tossing leaves and investigating the leaf litter. 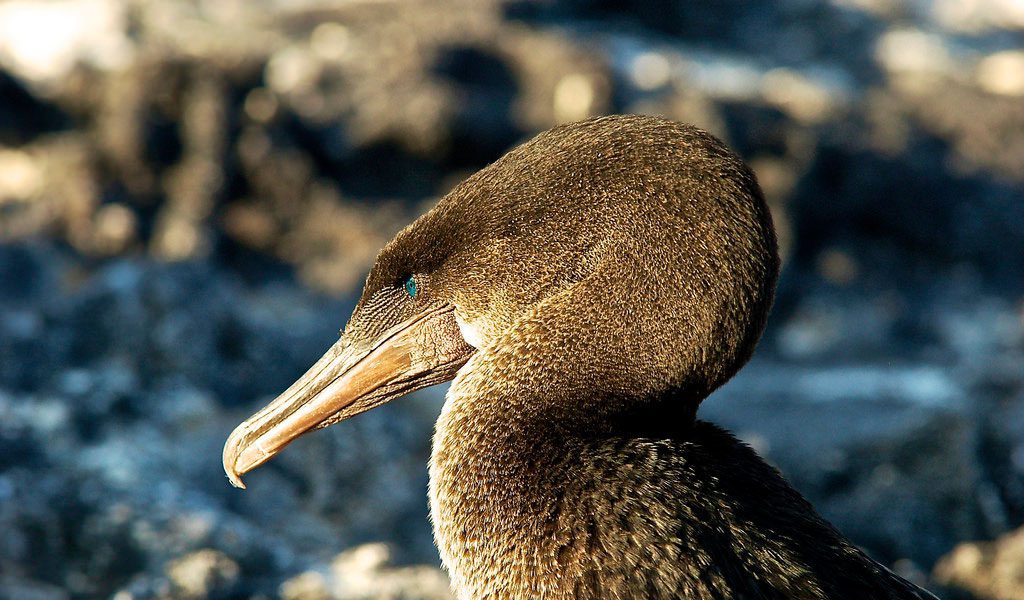 The Flightless Cormorant (Phalacrocorax harrisi), also known as the Galapagos Cormorant, is a cormorant native to the Galapagos Islands and an example of the highly unusual fauna there.

The Flightless Cormorant is unique in that it is the only cormorant that has lost the ability to fly.

With only 1500 estimated individuals, it is one of the worlds rarest birds and is the subject of an active conservation programme.

Like all cormorants, this bird has webbed feet and powerful legs that propel it though ocean waters as it seeks its prey of fish, eels, small octopuses and other small creatures. Flightless Cormorants feed near the bottom and no more than 100 metres offshore. 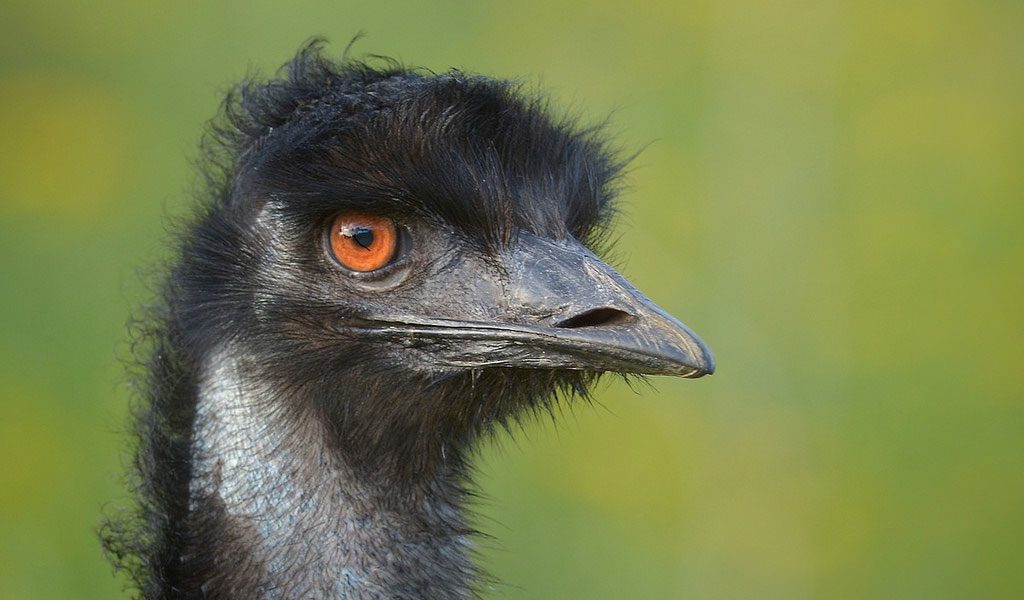 The Emu is a large, tough flightless bird found in many parts of Australia and New Guinea. It is Australia’s largest bird and the only member of the Genus: Dromaius.

The Emu is the second largest bird in the world, the largest being the similar looking, Ostrich. Although Emus resemble Ostriches, emus have a longer, lower profile and 3 toes on each foot (Ostriches have only 2 toes on each foot). The closest relative to the emu is a Cassowary, another flightless bird.

They have 2 concealed wings and a highly specialized pelvic limb musculature which aids their ability to run so fast.

The kiwi is a small, shy bird that is native to New Zealand. It is the national bird of New Zealand, and it is also the country’s unofficial mascot. The kiwi is a nocturnal bird, which means that it is active at night. It has poor eyesight, but its sense of smell is very strong. The kiwi is a ground-dwelling bird, and it nests in underground burrows. It feeds on insects, grubs, and small reptiles. 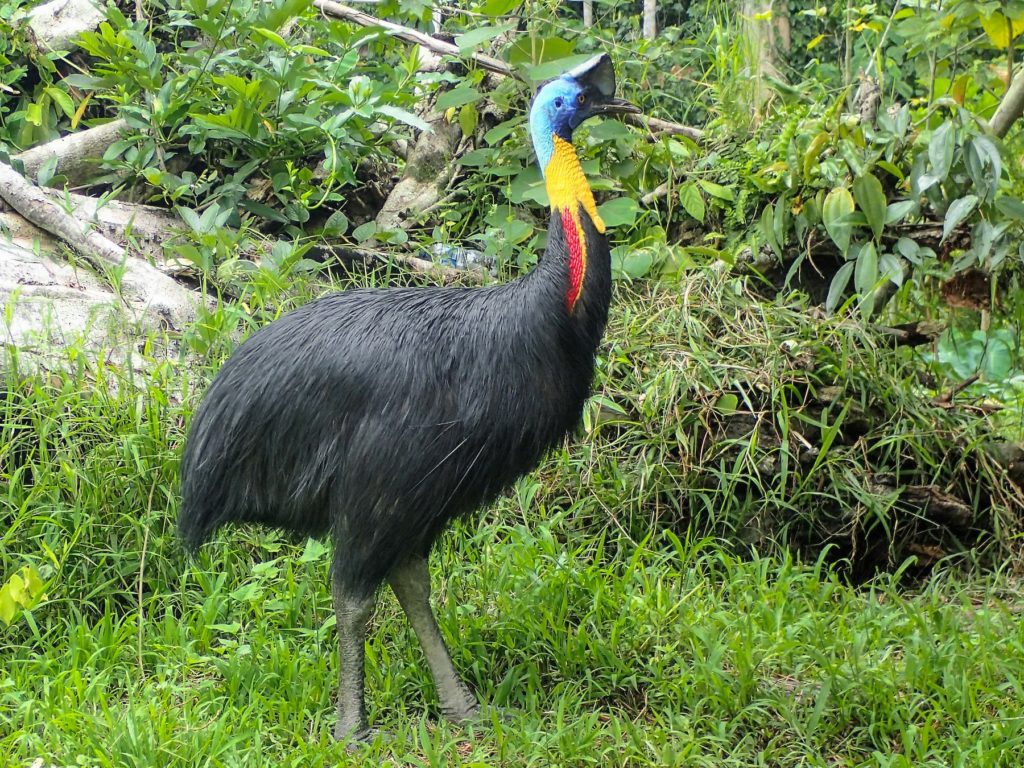 The cassowary is a large, flightless bird that is native to Australia and New Guinea. It is the third-largest bird in the world, after the ostrich and the emu. The cassowary is a carnivore, and its diet consists mainly of insects, reptiles, and small mammals. It can also eat fruit, and it is known to eat up to 150 different types of fruit! The cassowary is a shy bird, but it can be very aggressive if it feels threatened.

The cassowary has often been labeled “the world’s most dangerous bird”. 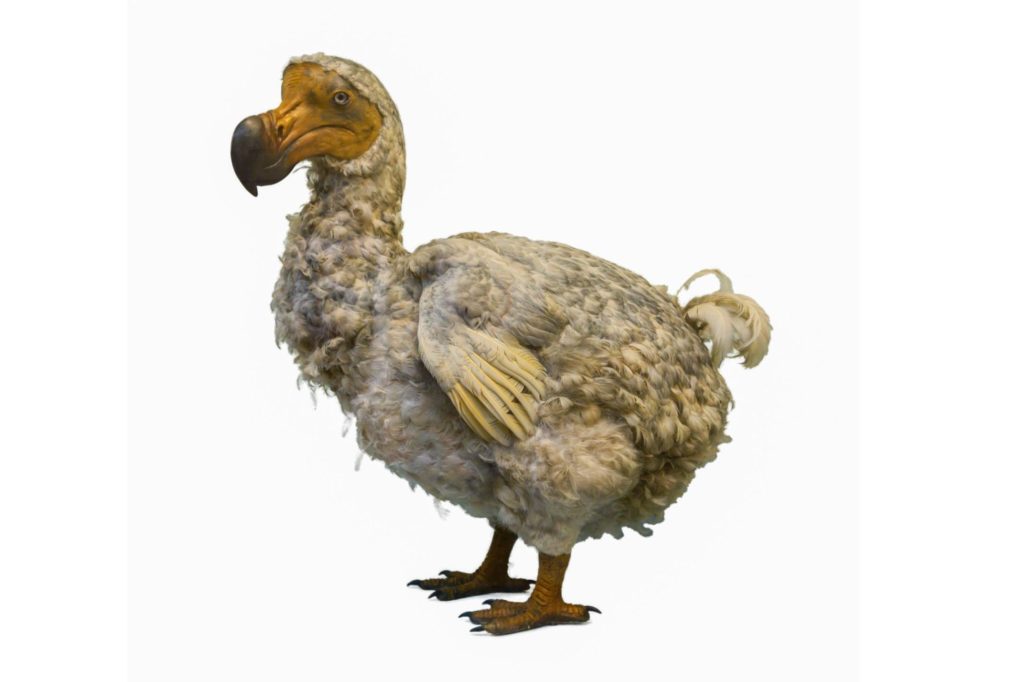 The dodo was a flightless bird that lived on the island of Mauritius in the Indian Ocean. The dodo was hunted to extinction by humans and by the introduction of invasive predators such as cats and dogs . The dodo is now extinct and is considered to be one of the world’s most famous extinct species.