You are here: Home / Blog / 11 Of The Smallest Monkey Breeds On Earth

Monkeys are agile creatures that have evolved over time to move quickly and efficiently through trees and jungle canopies. They are exotic in appearance and in their nature, with no other animal on the planet like them.

Monkeys are unique to say the least! They share many of our characteristics, which is probably why we love them so much.

Whether its old world monkeys or new world monkeys, they come in all shapes and sizes from very large to very small. When we think of monkeys, we often picture chimps or gorillas in our minds. These monkeys we have listed below are much smaller in size and can move at lightening speed.

We have put together a list of the world’s smallest monkeys. Starting from the largest and working our way down to tiniest monkey species. They all can be found in the forests of Africa, Central America, South America and Asia. One of the smallest monkeys in Africa is the talapoin monkey. They live in family groups that may join up with others. The monkey breeds once a year. It can be found in the central-western part of Africa where it lives in among the trees of the rain forests, mangrove swamps, and plantations, which they frequently like to raid for food!. Often you will see them near a body of water.

They weigh between 1.75 to 4.2 pounds and body length of between 10 and 16 inches. Their tale is just as long as their body.

The talapoin has an unusual light green fur, with its chest and belly fur are pal. It has fan-shaped whiskers and prominent ears. 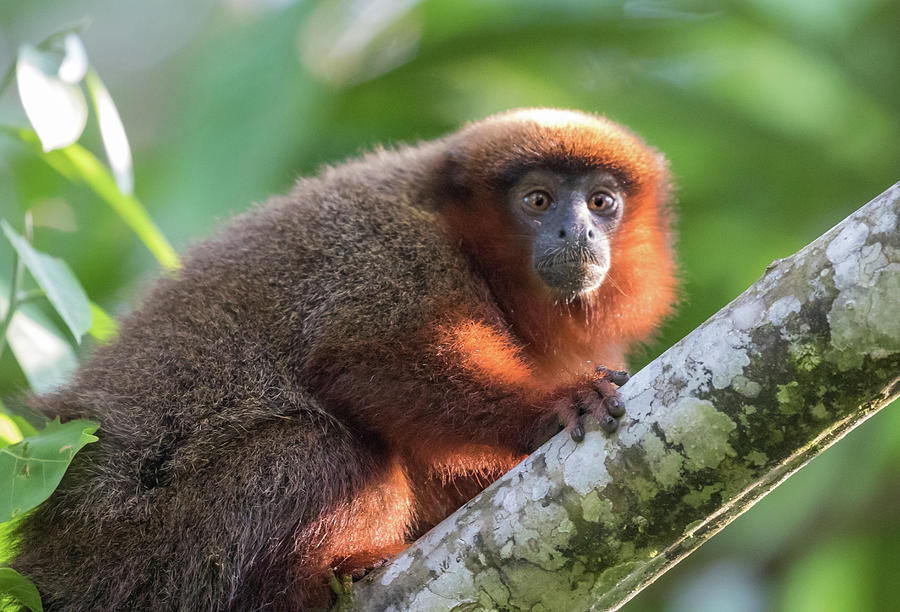 Unlike many other primates, Dusky Titi monkeys mate for life. They choose a partner, form a strong bond and they stick to them.
They are often seen with their partner and offspring, so when you do see them, you’re more likely to see the whole Titi family! The male will often carry the babies.

Dusky Titis are only found in near the Amazon river basin in central Brazil. They weight about 29 ounces and their body length ranges from 10 to 16 inches.

They are mostly vegetarian and will mostly feed upon fruits, veggies, and other plants. They do also eat occasional insects.

The Dusky Titi is a rather passive monkey when compared to Capuchins and Squirrel Monkeys. These couch potatoes spend a lot of time among vine tangles and low rainforest trees, nibbling on fruits. 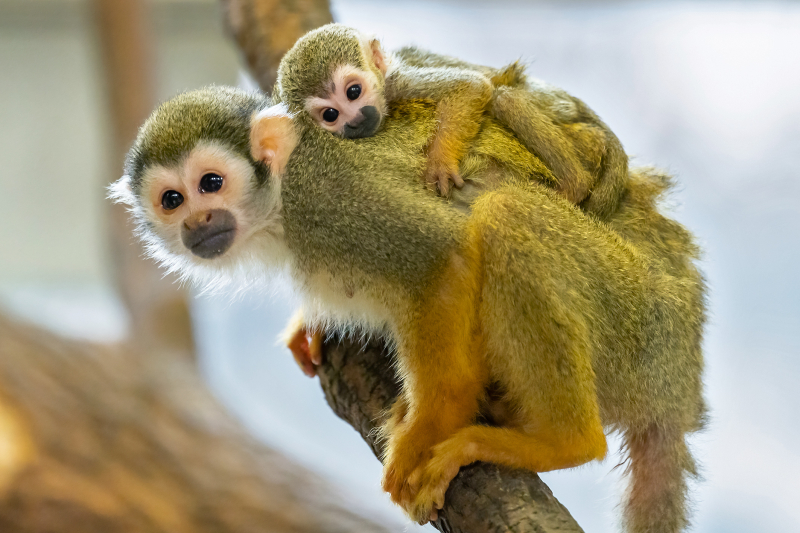 Squirrel monkeys are little monkeys with grey fur on the majority of their bodies and yellow fur on their arms and tail. These monkeys dwell in groups of up to 500 in the forest canopy layer of Central and South America! They are unable to hold branches with their tail, unlike some other monkeys.

Their tails are just there to assist them in maintaining their balance. Squirrel monkeys are thought to be extremely intelligent, with a huge brain compared to their body size. 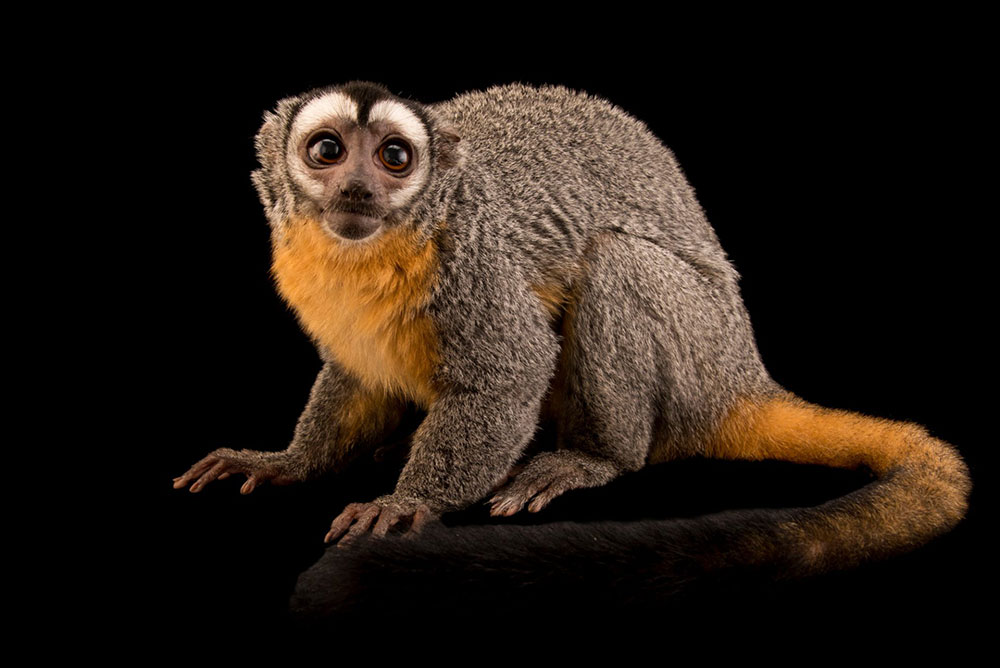 Night monkeys are known as “Owl monkeys” are about 25 inches tall (64 cm).

They have large brown eyes and are nocturnal monkeys, meaning they are most active at night.

They are one of the few night animals that do not have nocturnal eyes that glow (due to a reflective layer behind the retina).

This is the genuine sign that these animals have evolved into night creatures. They haven’t always been active at night, but they did so (most likely) to stay alive. They are mostly found in America’s central and southern regions. 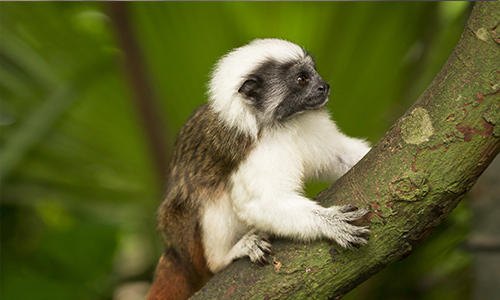 Cotton-top Tamarin monkeys are one of the smallest New World monkeys and are quite distinctive with their Albert Einstein style hair.

They measure between 8.2 and 10.2 inches long and weigh less than a pound in weight. the cotton-top tamarin is one of the smallest of the New World monkeys.

They dwell in Colombia’s jungles, or what’s left of them. Their habitat is increasingly being threatened because to deforestation in Colombia. The Cotton-top Tamarin is now classified as critically endangered as a result of this. Only roughly 6000 of them are still alive now. 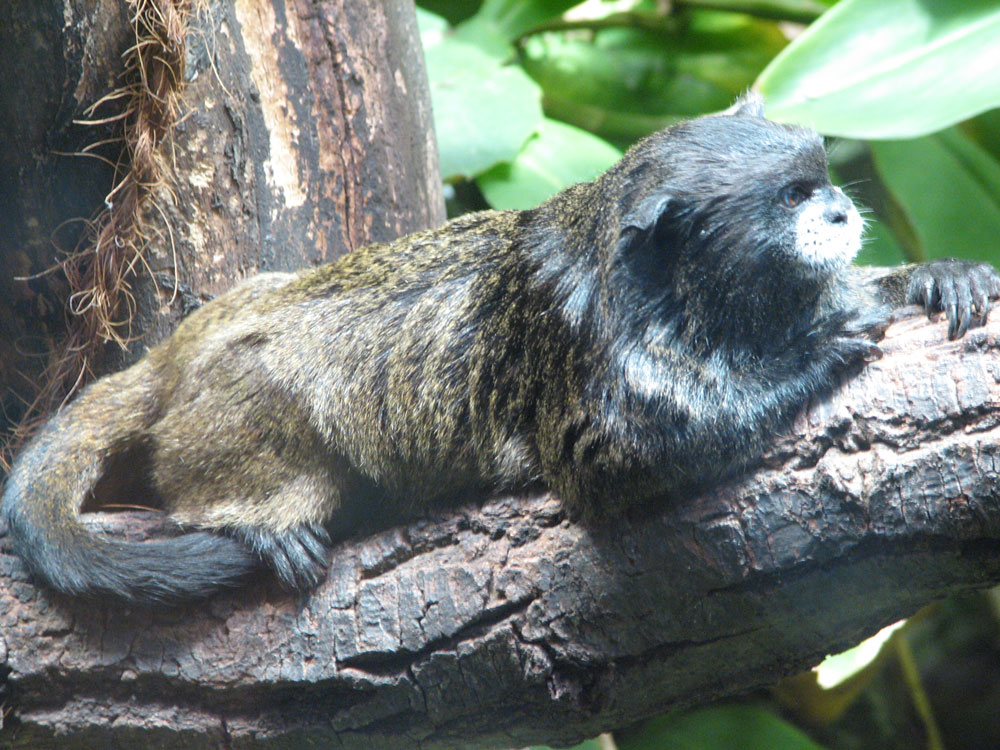 Graells’s Tamarins are fascinating little monkeys. Males are smaller than females, and the breed is monogamous. nly the dominant pair to reproduce. The dominating female gives birth twice a year, at night, and after a 130 to 170-day pregnancy, she always bears twins. Incredible!!

The Graells’ Tamarin can be found in the Amazon rainforests of Ecuador, Peru, and Colombia.

They are 7.8 to 12 inches long without their long tail and weigh between 7.9 and 32 ounces on average.

They has long, silky fur that is mostly black or dark brown in hue. Except for their opposable thumb, which has a nail, these tamarins have claws on all of their fingers. They have claws or nails that mimic claws on their fingers and a proper nail on their thumb, just like tamarins. They are acrobatic in the forests of southeastern Brazil, where they reside. They are known to live in nearby towns and cities.

The Silvery marmoset is a small monkey with pointed jaws that is makes them easily recognizable. As a result of its eating activity, this animal has abnormally short, pointed canines. This is due to the fact that it, like the ordinary marmoset, feeds on tree sap and must gnaw a hole in the tree to access it. It eats eggs, fruit, and insects as well. The monkey’s diminutive stature makes it easy for it to catch insects. The entire family, like other marmosets, contributes to the upbringing of the young. 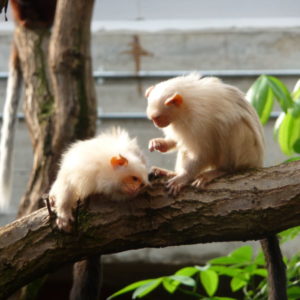 The Silvery Marmoset is also known as the ‘Black-tailed Monkey’ because of its extremely dark tail. It’s a member of the Callitrichidae family of New World monkeys.

This monkey is only found in the eastern Amazon basin’s jungles (Brazil). These animals, despite their little size, are extremely intelligent. Except for halluces, these primates have claws on all of their toes, which distinguishes them from other New World monkeys, who have nails on all of their toes. 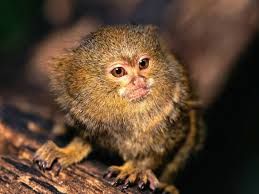 The Amazon rainforest is home to the Roosmalen’s Dwarf Marmoset, which is only 7 inches long. Surprisingly, this monkey species was just found in 1998.

A rich brown top contrasts with a darkish yellow belly and chest on these marmosets. The face is bald and pink, with white hair around it and a black crown on top. White brows stretch all the way to the monkey’s temples.

Females are larger than males, with weights ranging from 5.29 to 6.52 ounces. It enjoys tree secretions, just as other marmosets. Unlike other marmosets, a female can only have one baby at a time, and no more than one female can give birth at the same time. Tarsiers are well known for their huge striking eyes. They are only 4-6 inches long (10-15 cm). If you count the tail, their length size triples. They have a serious, intense expression on their faces because their eyeballs are almost protruding from their little skulls.

Tarsiers have the widest eyes in proportion to their body size of any mammal. Each eyeball has a diameter of around 16 mm and weights about as much as the animal’s brain.

Tarsiers used to be quite widespread around the world, but are only found in Maritime Southeast Asia, specifically the Philippines, Malaysia, Indonesia, Brunei, Sulawesi, Borneo, and Sumatra. 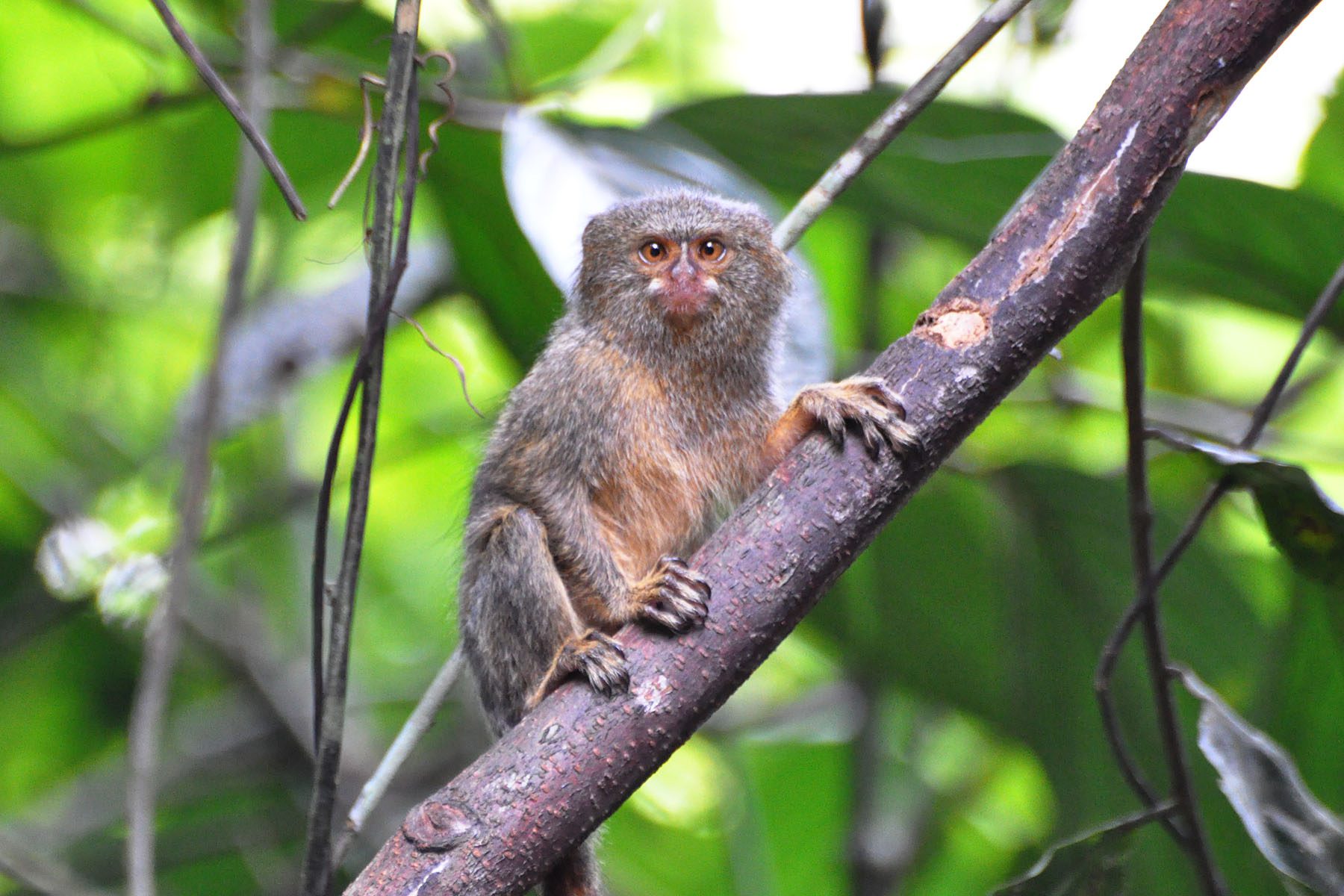 Pygmy marmosets are the world’s tiniest monkeys, found in the rainforests of the western Amazon basin in South America. They only reach a length of a few inches and weigh a few ounces. Their tails are longer than their bodies, allowing them to run through the treetops with remarkable balance.

They are prey to a variety of larger predators, including cats, eagles, snakes, and hawks, due to their small size. They are, however, quite swift and can even spin their heads almost completely backwards to keep an eye on everything.