Terriers are a specific group and type of dog breed; originally bred to dig and hunt for vermin. Vermin is defined as ‘quadrupeds’ such as badgers, otters, weasels, rats, mice, and birds, like hawks and owls. 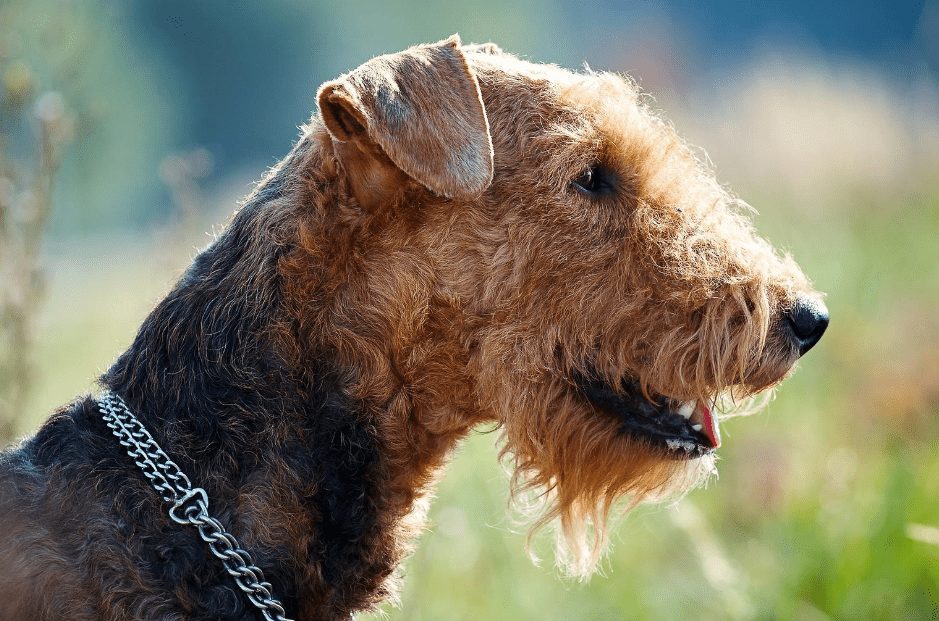 The Airedale Terrier is a neat and upright, medium-sized dog with very long legs. It has a shaggy and wiry, short-haired double coat and drop-ears that bend forward.

An Airedale Terrier is an extrovert dog that when trained and properly socialized will be child friendly and could adapt to family life. Airedale puppies are playful and look just like big Black and Tan Yorkshire Terrier puppies.

In the mid-19th century, in England, Great Britain, the Airedale Terrier was specifically bred to be versatile hunting, scenting, and working dog; like most Terrier dogs. The Airedale Terrier originated in the Aire Valley (or Dales), where the River Aire flows through the West Riding and Bingley areas of West Yorkshire, in England. 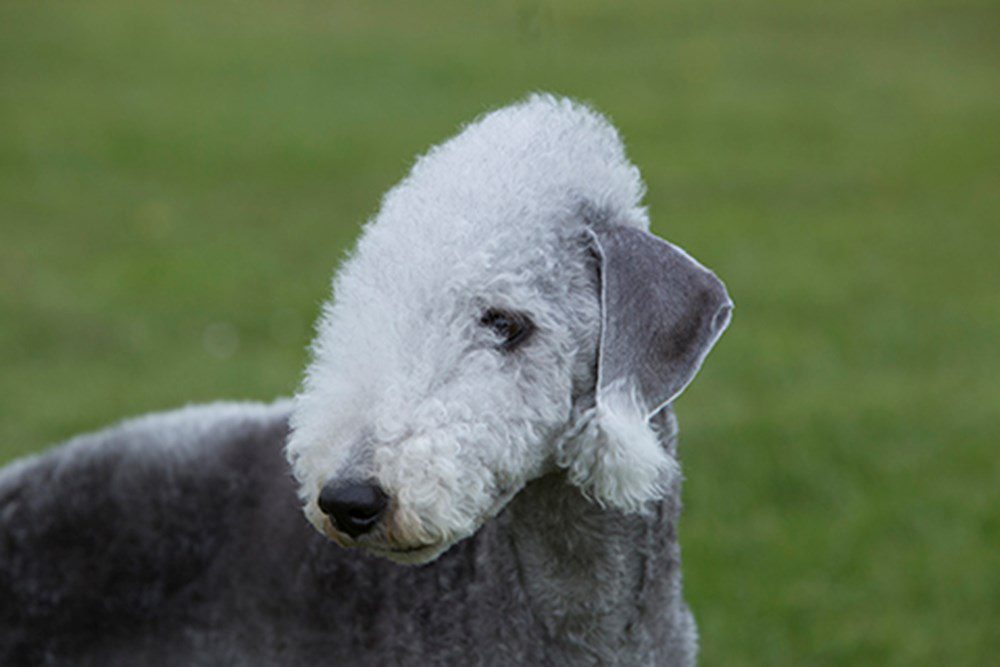 The Bedlington Terrier is a breed of dog that originated in Bedlington, Northumberland, England. They are a small terrier type dog that is known for their unique coat which has a wooly texture. They are also known for being energetic and playful, making them a popular choice as a family pet.

The Bedlington Terrier is a versatile breed that can excel in a variety of activities including agility, obedience, and tracking. 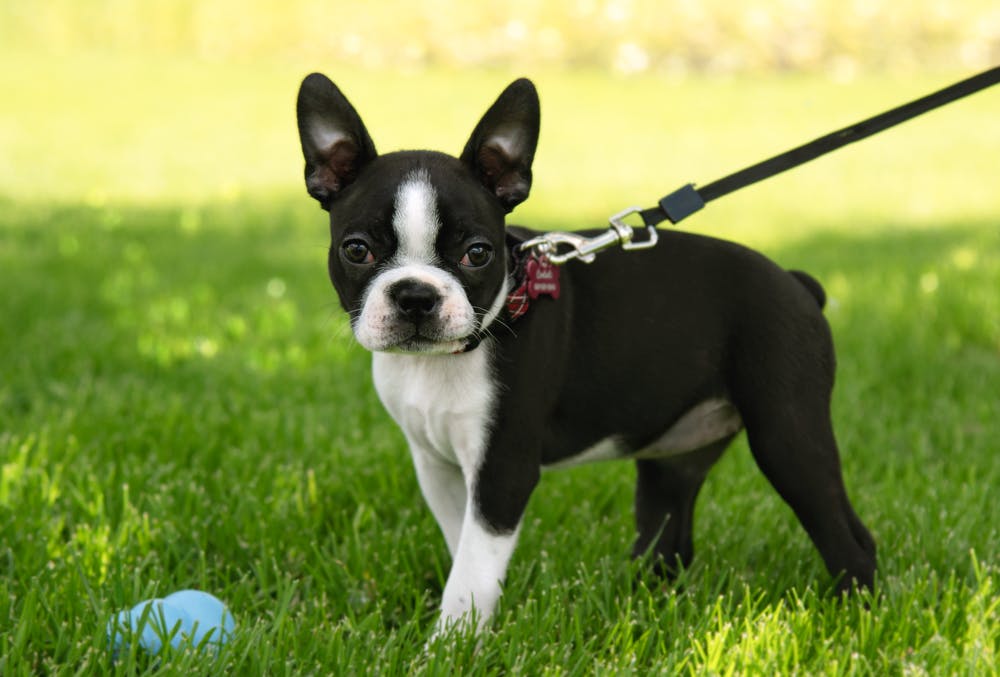 The Boston Terrier is an adorable small breed that is perfect for everyone! With low-care needs and their sociable and kind personality, the Boston Terrier makes a great pet even for those who have no experience with dogs. Their small and compact size also means they are suitable for those who live in cities and don’t have a lot of space for a bigger pup, but still want lots of love and attention.

The official state dog of Massachusetts, there is a lot to learn about this American dog.

The Boston Terrier is a family companion that thrives around humans. They are a generally very happy dog with an excitable nature and makes an excellent pet to all, even first-time owners.

The Boston Terrier is the official state dog of Massachusetts, which is thanks to their history. They were first recognized by the American Kennel Club (AKC) in 1893, just after the Boston Terrier Club of America was founded in 1891. There are also many affiliate breed clubs across the United States, Canada and New Zealand. The Cairn terrier is another popular terrier breed. These dogs are small and compact, and they were originally bred to hunt rodents on the Scottish Isle of Skye. Cairn terriers are independent and stubborn, and they need plenty of exercise. They can be good with children if they are properly socialized, but they may not be the best choice for families with small children. 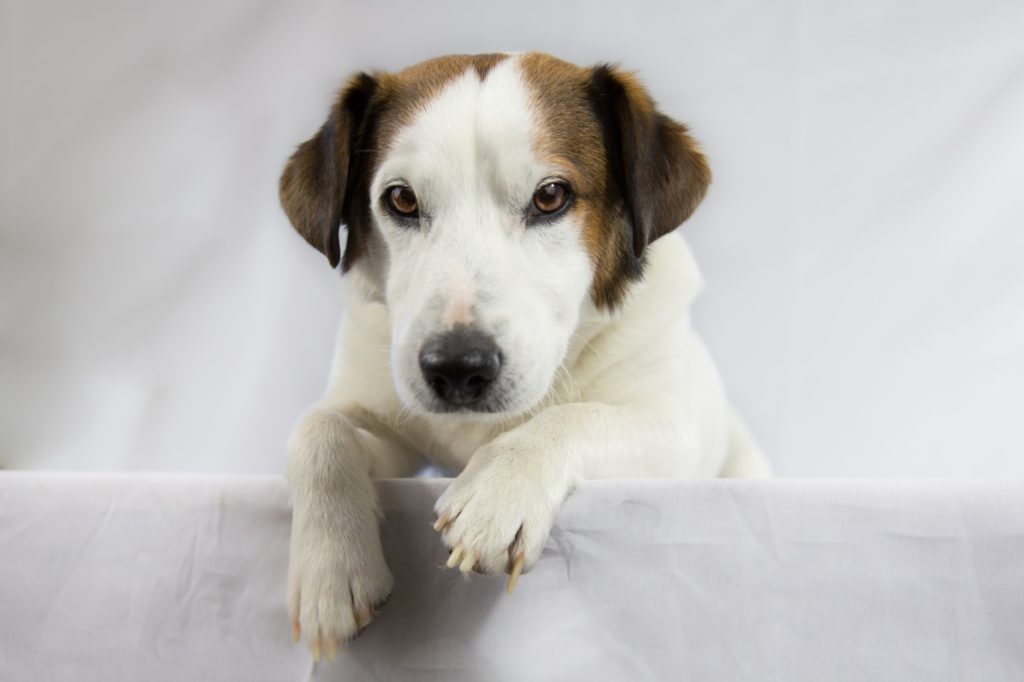 The Jack Russell Terrier, also known as the Parson Russell Terrier, is a lively, independent and clever little dog. These purebred dogs can be charming and affectionate, and, although highly trainable, you’ll need a lot of patience and are not usually suited to first time dog owners. Jack Russells are athletic dogs that have an intense desire to hunt and thrive when kept entertained. They love to be outside and require a lot of exercise everyday, making them a great pet for those who spend time outdoors.

Jack Russells are a favorite among horse owners, dog sports enthusiasts, animal trainers for film and television and people who love their fearless personality, boundless energy, entertaining antics and portable size. If you’re interested in this energetic little companion and are looking for a dog to play fetch with, learn tricks, and don’t mind them chewing, digging and barking, this pup might just be for you. 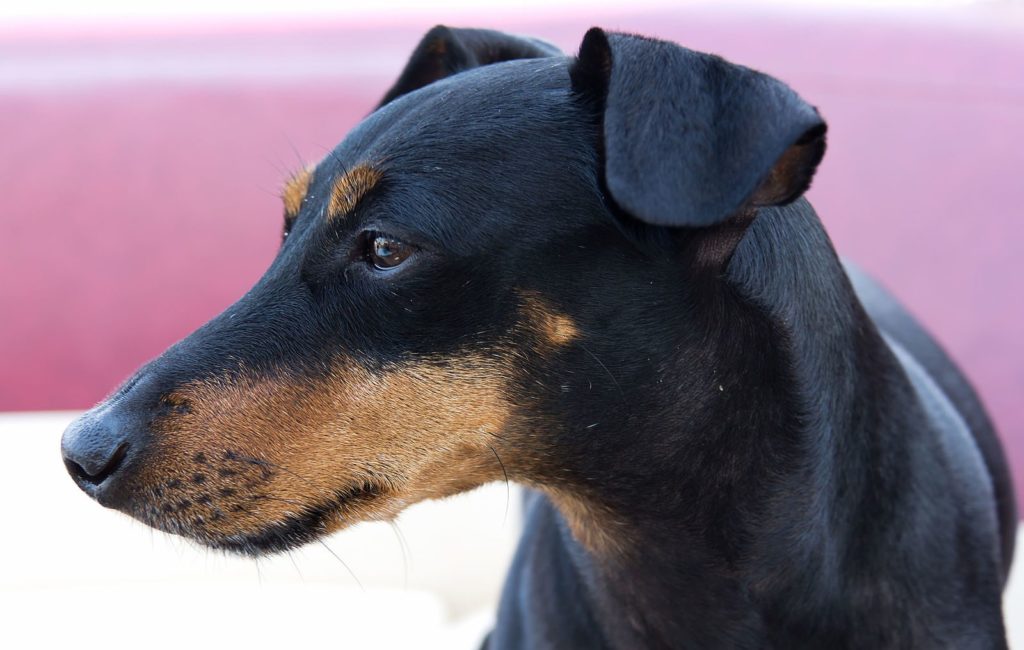 Originally bred in Manchester, England, the Manchester Terrier, also known as the Gentleman’s Terrier is a lively and spirited dog that makes him a great companion. Although small in size, the Manchester Terrier has a big personality and is loyal to his owners. With a strong bark, these dogs make a terrific watchdog but are not aggressive. They are actually known to be one of the more well-mannered and loving dog breeds out there today.

Although these dogs look like a miniature Doberman Pinscher or a large Miniature Pinscher, the Manchester Terrier is a breed in their own right. 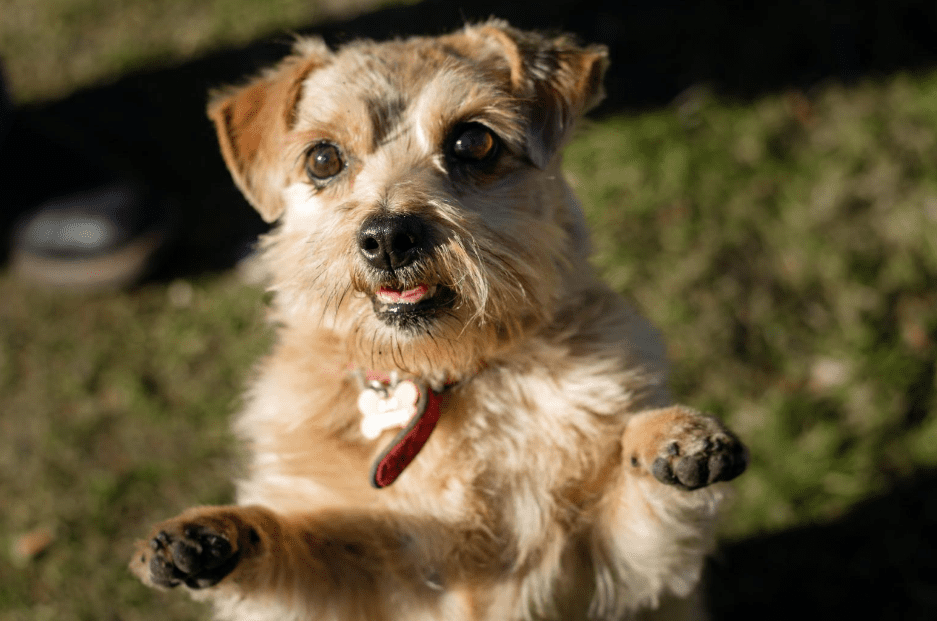 The Norfolk Terrier is a small earth dog with a high energy level and a big attitude. It’s a pretty fearless working Terrier when it comes to catching vermin or chasing off foxes. It looks like the Norwich Terrier dog, but with drop-ears instead of having upright prick-ears, a scruffy, wiry coat, and loving dark eyes.

The Norfolk Terrier was a variety of the Norwich Terrier, that originated in the County of East Anglia, in England, Great Britain

The Norwich Terrier and the Norfolk Terrier are now recognized as separate purebred dog breeds.

In the early 20th Century, Frank Jones, a horseman with livery stables, in the area of Norwich, East Anglia, Great Britain, needed a skilled ‘ratter’ (vermin catcher) so he started breeding Terrier dogs.

It’s believed he crossed Irish terriers with Yorkshire terriers, to produce a lively but smaller working Terrier, with a prey drive that would make a superior ratter and fox watchdog, for farms and stables. 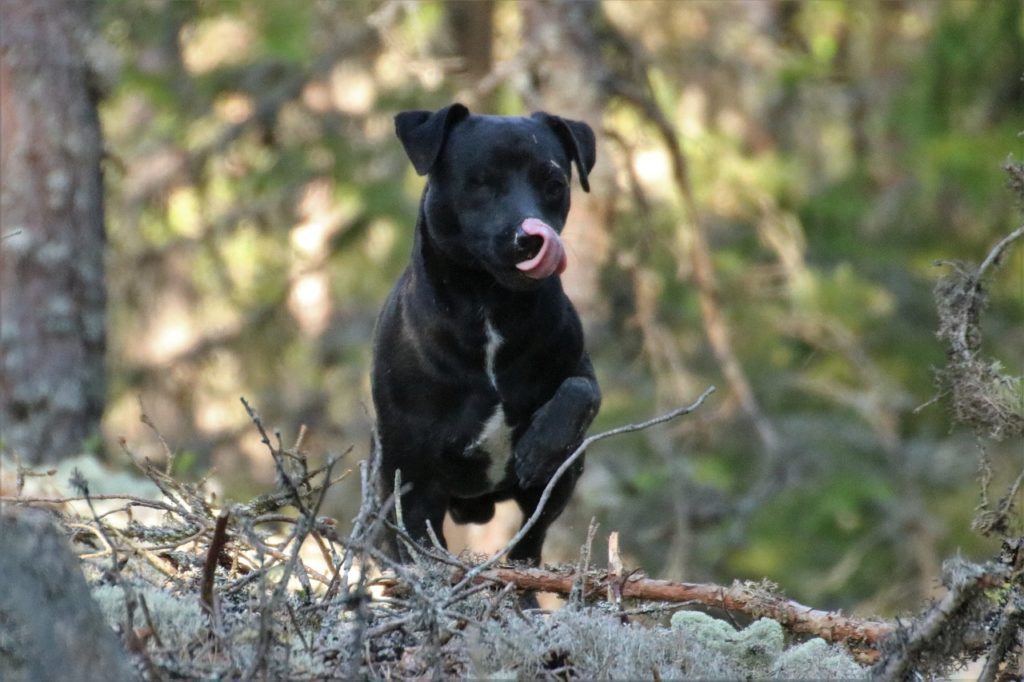 The Patterdale Terrier is the small dog with the big personality. Originally bred to chase small prey, these dogs are energetic and require a lot of time outside. They’re versatile and adaptable, as well as being smart and very loyal to their owners. Because of their high energy levels they are often best tailored to more experienced pet owners, who have acknowledge of training more stubborn dogs. Don’t let this put you off though — with their sweet nature, they make wonderful companions. 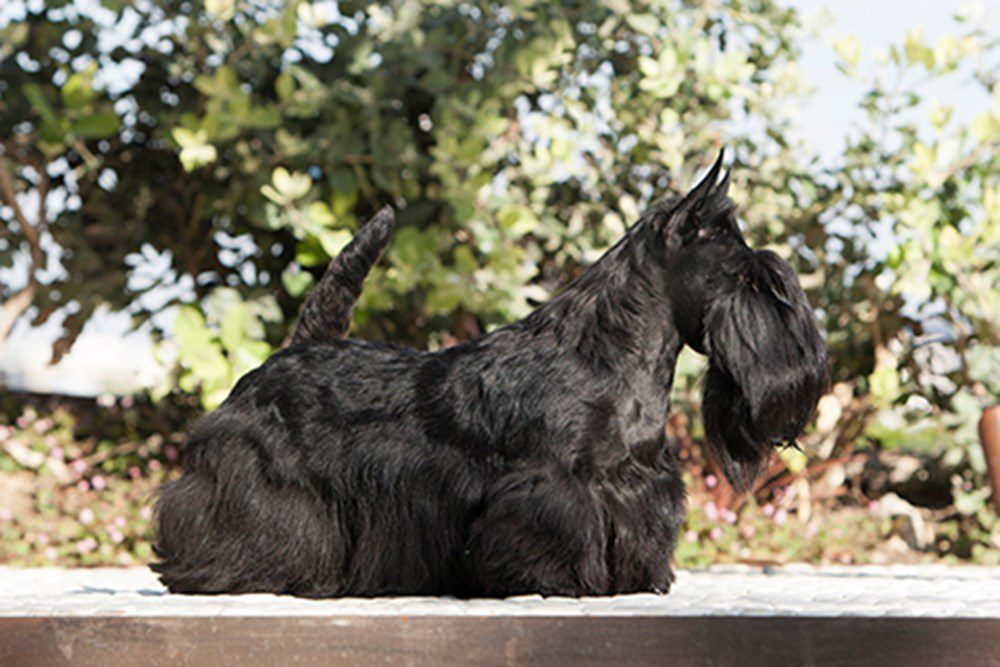 The Scottish terrier is another type of terrier dog breed. These dogs are also small, but they are more aggressive than other popular terrier breeds. They were originally bred to hunt foxes and other predators, and they still have a strong hunting instinct.

Scottish terriers are independent and willful, and they need plenty of exercise and training. They can be good with children if they are properly socialized, but they may not be the best choice for families with small children. 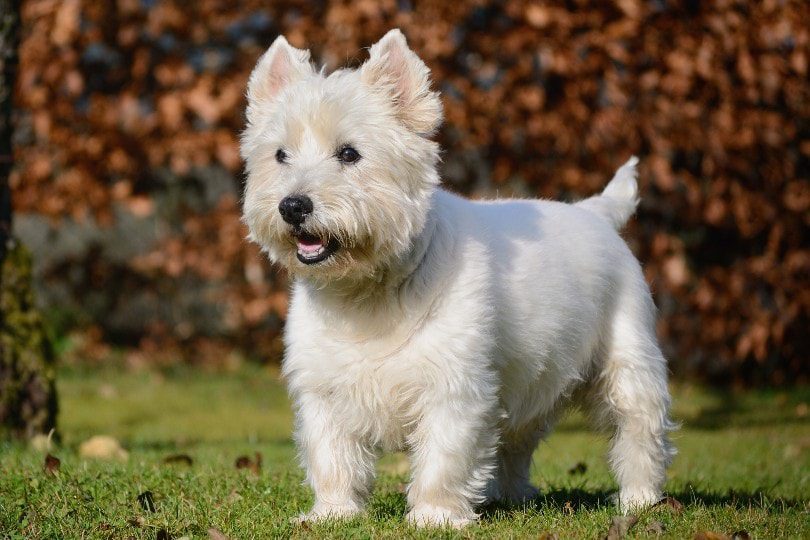 The West Highland white terrier, also known as the Westie, is a breed of dog from Scotland. It is a small, friendly dog that is popular as a pet. The westie was originally bred to hunt small game such as rats, and it is still known for its determined personality and fearless nature. These dogs are also known for their white coats, which make them easy to spot in a crowd. Westies are intelligent and independent dogs, and they are usually good with children. They need plenty of exercise and training, but they can be stubborn at times. 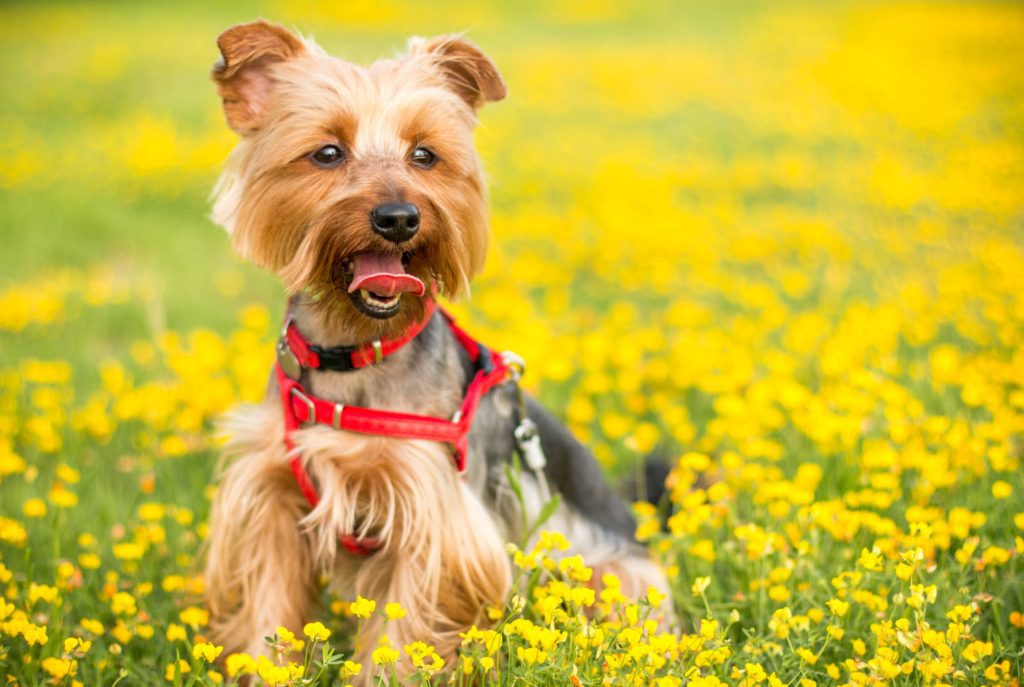 The Yorkshire Terrier is a small dog breed of terrier type, originating in the United Kingdom. The breed is often called simply the Yorkie. A defining feature of the breed is the size of 7 pounds (3.2 kg). Yorkshire Terriers are long-coated dogs. The coat is silky, glossy, and fine, and can be either straight or wavy. Since it does not shed, Yorkies are good for people with allergies to dogs. The traditional colors for the Yorkshire Terrier’s coat are steel blue and tan.

The Yorkshire Terrier was developed during the 19th century in Yorkshire, England. The Yorkie was bred to catch rats in clothing mills and coal mines. They were also used as guard dogs. The first recorded use of the word “Yorkshire Terrier” was in 1874.