Do you know which animals live in your city?

Most people don’t. In fact, there are a lot of animals that thrive in urban environments.

All over the world there are common species which have managed to adapt as urban wildlife, to live alongside humans, many of which are considered to be pests such as:

There is a growing trend of wildlife making its home in Europe’s cities. In London, for example, red foxes are a common sight, while in Paris there are estimated to be around 24,000 wild boar roaming the streets. Even smaller towns and villages are not immune to this phenomenon, with reports of badgers, deer, and other animals being spotted in urban areas.

There are a number of reasons why wildlife is increasingly choosing to live in cities. One of the most important factors is that cities offer a more stable environment than rural areas. With fewer people hunting and no large-scale farming taking place, there is plenty of food for animals to scavenge. There are also plenty of places to hide from predators, and urban areas tend to have milder climates than rural areas.

Of course, living in the city is not without its dangers for wildlife. Cars pose a major threat, and animals that do not have experience of living around humans can find themselves in danger if they venture into busy streets or try to make a home in someone’s garden.

Despite the risks, it seems that more and more animals are choosing to call cities their home. As humans continue to encroach on wild areas, it is likely that we will see even more urban wildlife in the years to come

No matter where you live in North America, you are likely to have some form of urban wildlife living nearby: 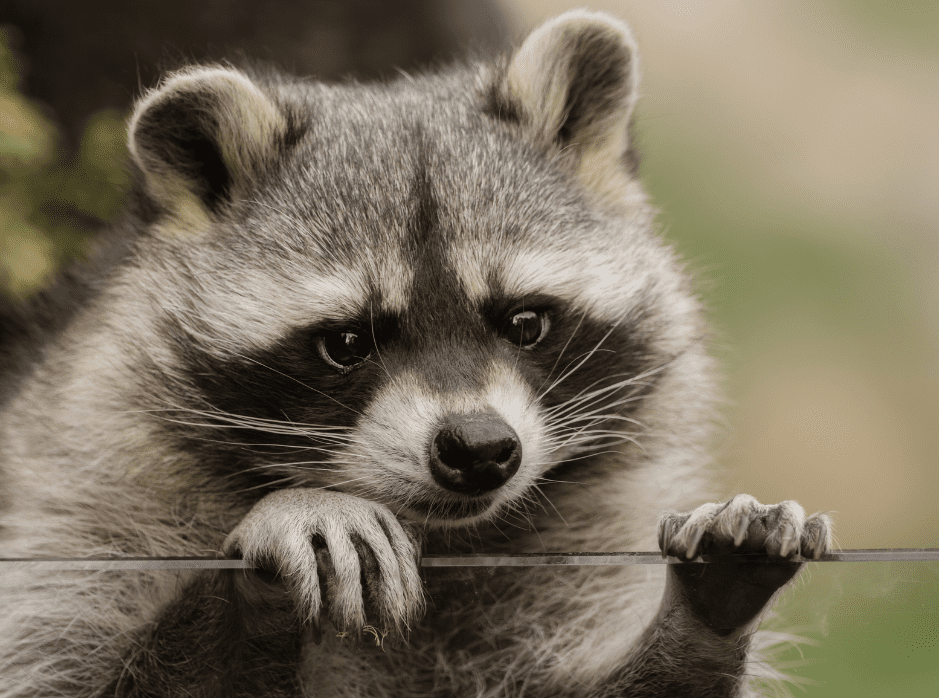 The Raccoon (Procyon lotor) is a member of the procyonidae family, a family of smallish animals, with generally slender bodies and long tails. Except for the kinkajou, all procyonids have banded tails and distinct facial markings. The raccoon is a medium sized mammal native to the boreal forests of North America.

Though usually nocturnal, raccoons are sometimes active at daylight to take advantage of available food sources. Raccoons are omnivores and feed up on plant foods and vertebrates. Their diet in spring and early summer consists mostly of insects, worms and other animals already available early in the year, raccoons prefer fruits and nuts that emerge in late summer and autumn for their rich calorie content in order to build up fat storage for winter.

Raccoon’s are very adaptable and this has lead to them living alongside humans in urban and suburban environments using their scavenging skills to look in trash for food. 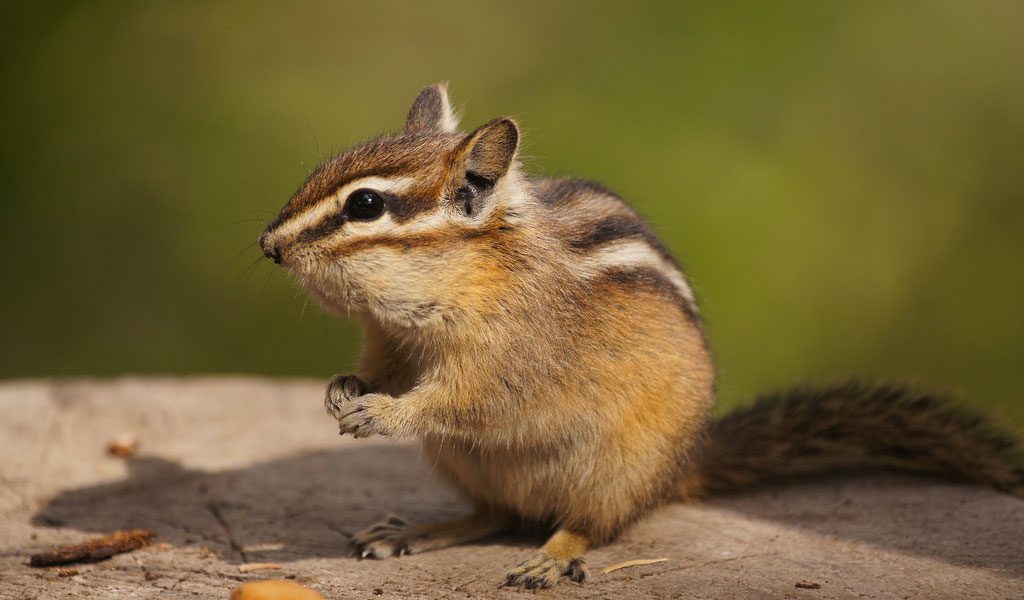 Chipmunks are small rodents of the squirrel family with a total of 25 different species (see bottom of page), all part of the scientific family, in the family Sciuridae. Chipmunks are lively little creatures that are found mostly in North and West America. Chipmunks are kept as popular and entertaining pets.

Chipmunks fulfil several important functions in forest ecosystems. Their activities which include harvesting and hoarding tree seeds play a crucial role in seedling establishment. Chipmunks also play an important role as prey for various predatory mammals and birds, however, they are also opportunistic predators themselves, particularly with regards to bird eggs and nestlings.

Chipmunks that reside in urban areas have been known to take handouts from humans, however, human food is not stored, it is just enjoyed as a novelty. 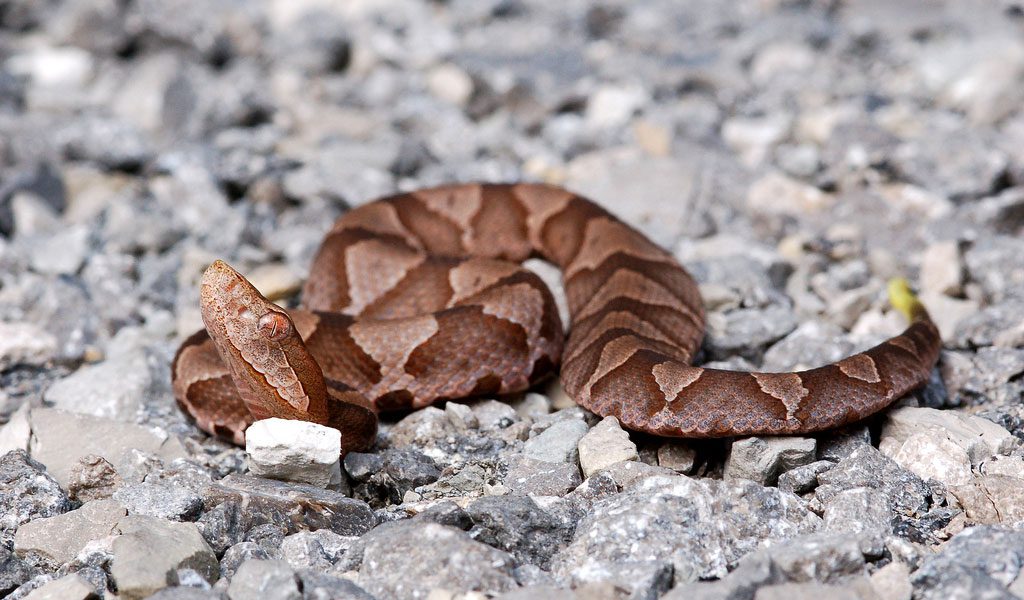 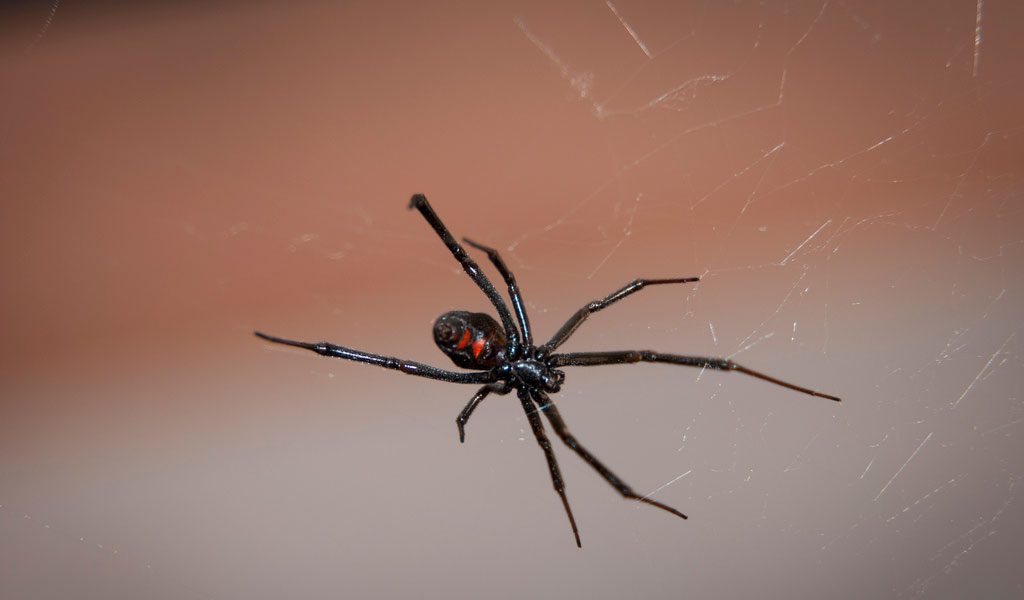 The Black Widow spider (Latrodectus spp.) is a spider notorious for its neurotoxic venom (a toxin that acts specifically on nerve cells).

The Black Widow Spider is a large widow spider found throughout the world and commonly associated with urban habitats or agricultural areas. The name ‘black widow spider’ is most commonly used to refer to the three North American species best known for their dark coloration, black hair and red hourglass pattern. 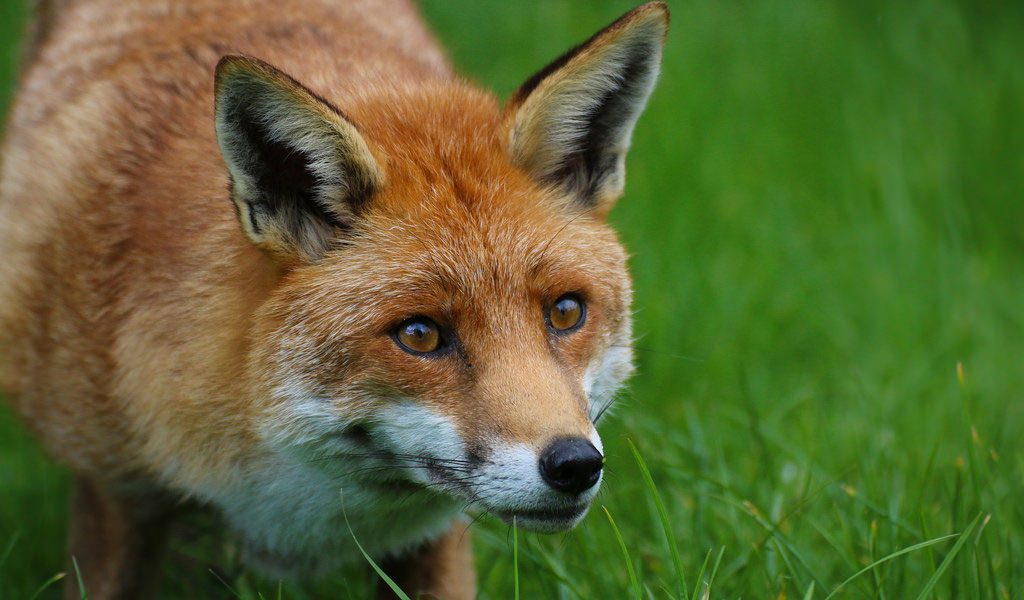 Red foxes are mainly carnivores but are generally classed as omnivores. In Britain, the red fox feeds mainly on small rodents such as field mice, voles and rabbits, however, they will also eat birds, insects, earthworms, grasshoppers, beetles, blackberries, plums and mollusks and crayfish, amphibians, small reptiles and fish. almost anything it finds, often eating carrion (dead animal carcass) or preying on new-born lambs in the spring. Foxes have also been known to kill deer fawns.

The fox is a remarkably resourceful creature, able to cope in a very wide range of different environmental conditions, from sub-tropical regions to icy tundra, the red fox is able to find food and keep warm. Foxes inhabit almost every habitat – sea cliffs, sand dunes, salt marshes, peat bogs, high mountains, woodland and particularly abundant in urban areas. They make ‘lairs’ in a foxes ‘earth’, under tree trunks, in hollow trees, in bracken or in a deserted buzzard nests. 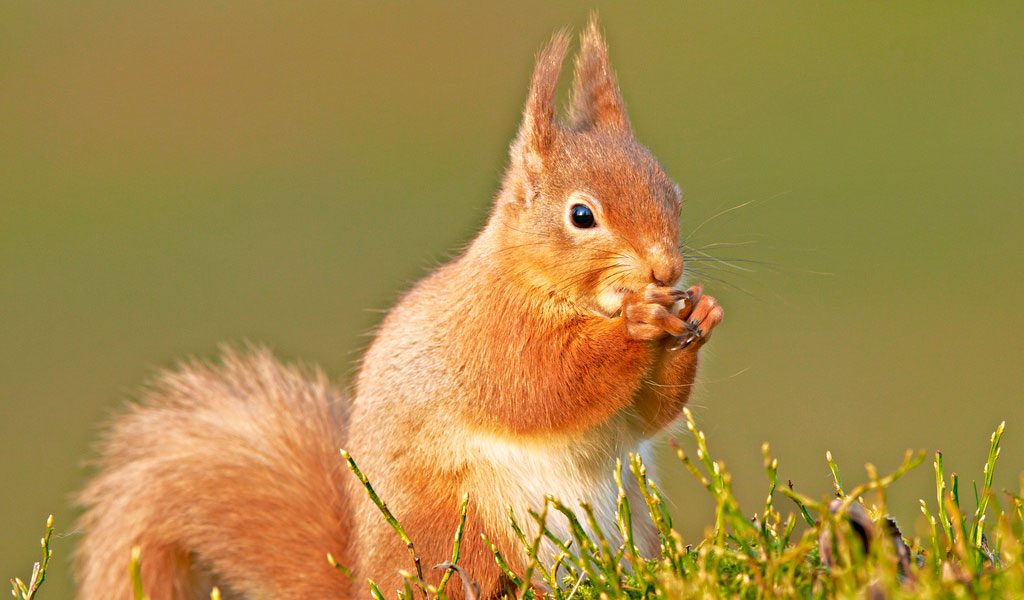 The Red Squirrel (Sciurus vulgaris) is a species of the tree squirrels. Red squirrels are tree-dwelling omnivorous rodents that are frequently found throughout Eurasia. In Britain, however, numbers have decreased drastically due to the introduction of the eastern Grey Squirrel from North America.

The red squirrel is protected in most of Europe, however in some areas it is abundant and hunted for its fur. The red squirrel has drastically reduced in numbers in the United Kingdom. Under 140,000 individuals are thought to be left, approximately 85% of which are in Scotland. 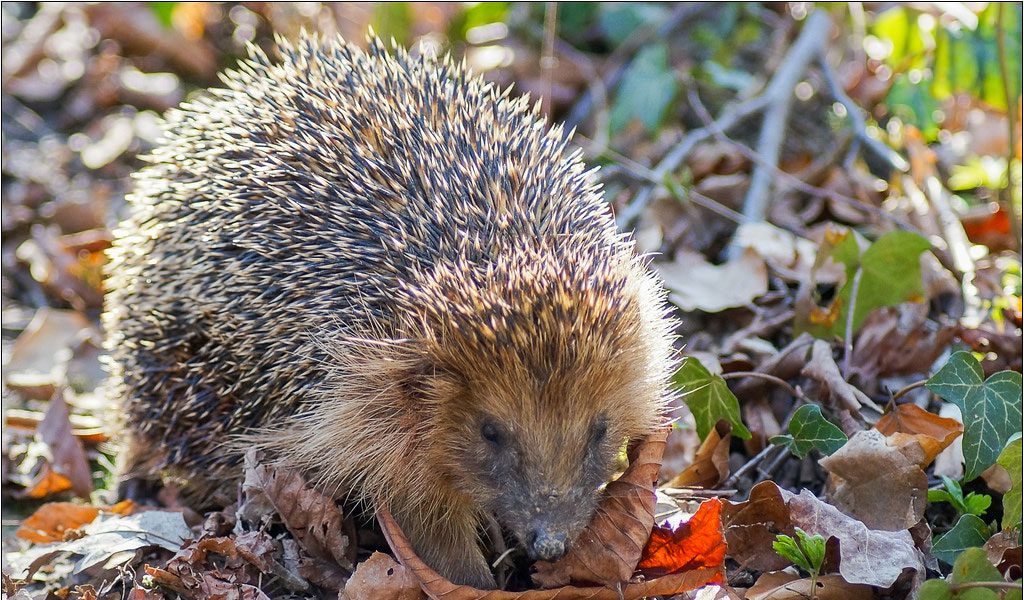 Hedgehogs are native to mainland Britain and are also found throughout northern and western Europe. Related and similar species are also found as far as north Africa, the Middle East and central Asia. There are 16 species of hedgehog in five genera, found through parts of Europe, Asia, Africa and New Zealand. There are no hedgehogs native to Australia and no living species native to North America. Those in New Zealand are introduced.

Hedgehogs build nests of moss and leaves under vegetation around parks, gardens and farmland. They prefer woodland edges, hedgerows and suburban gardens where food is plentiful. 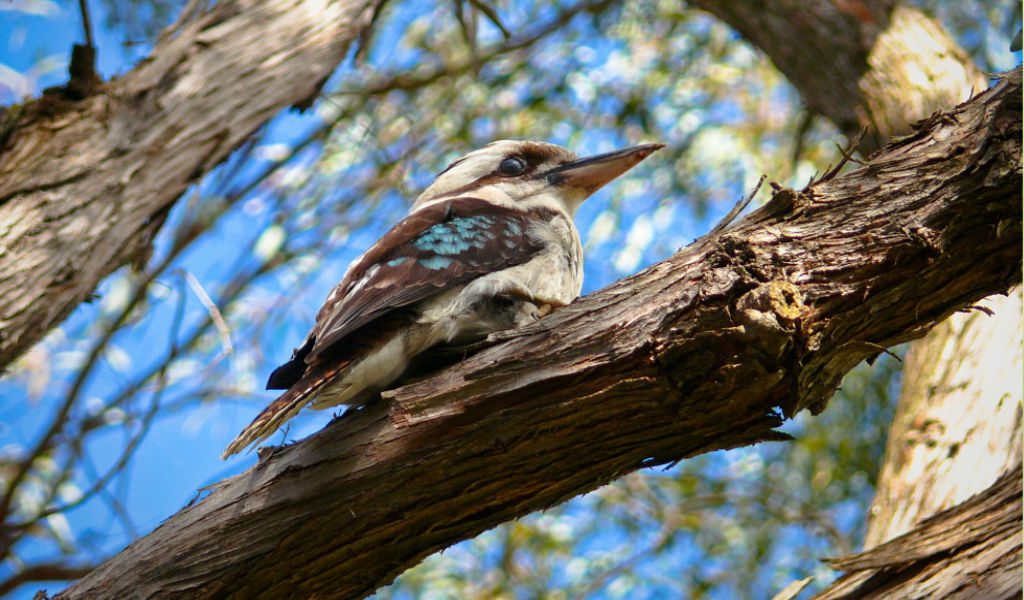 Laughing Kookaburras spend most of their day perched in high branches overlooking rainforest clearings watching for prey. They are territorial birds and their loud dawn and dusk calls warn all surrounding birds that they are ready to defend their territories. They begin with a a repeated ‘kook-kook-kook-ka-ka-ka’ call that rises and falls in volume as family members join in and then they throw their heads back into a loud chorus of boisterous laughter.

Laughing Kookaburras are quite tame and social birds who will give you a loud chorus of laughter before coming down from their perch to accept scraps of meat from their audience. Being a common sight in suburban and urban areas, laughing kookaburras will even eat out of a human hand. 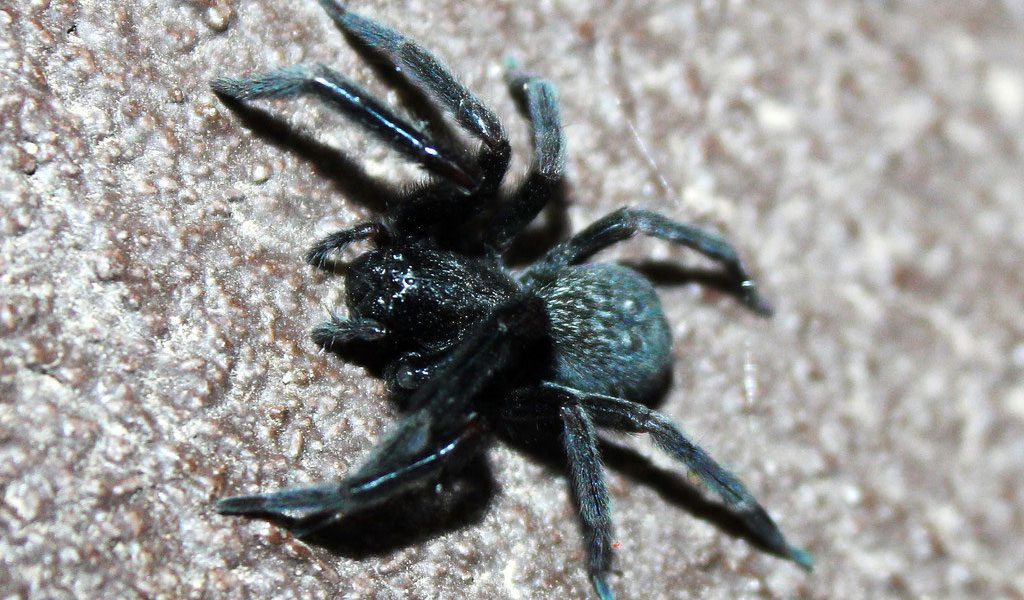 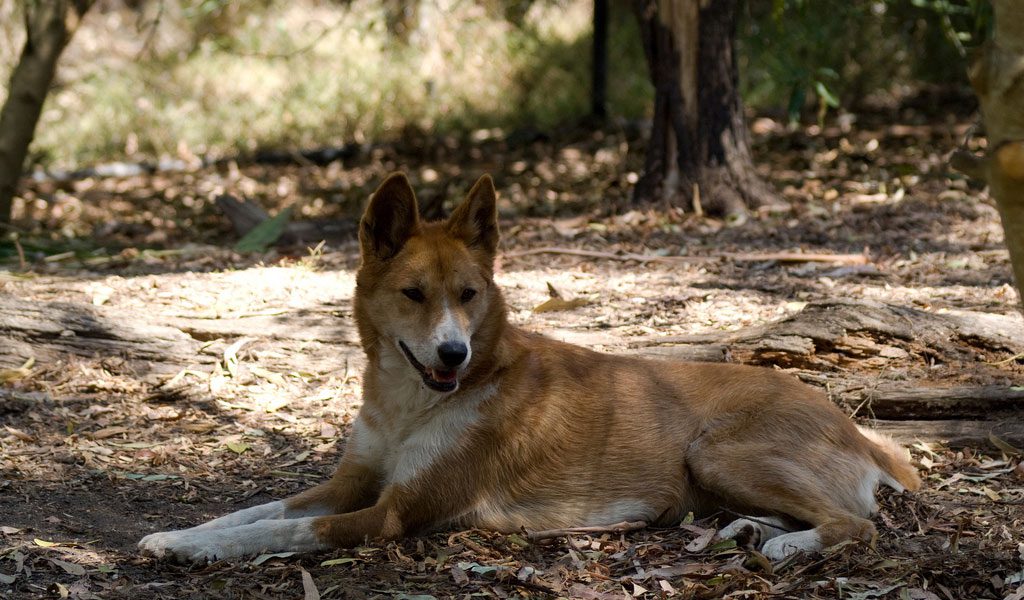 The Dingo (Canis lupus dingo) is a member of the dog family and commonly described as an Australian Wild Dog. Dingoes are found in all parts of Australia (excluding Tasmania), although they did not originate from there. Dingoes did not arrive in Australia with Aboriginal people, but were transported there from mainland Asia between 3,500 and 4,000 years ago.

Dingoes can also be found throughout the remaining natural forests of Southeast Asia. Australian dingoes tend to be larger than those in Asia. Dingoes have features that resemble both dogs and wolves, although dingoes have a longer muzzle, longer canine teeth and a flatter skull.

Dingoes have a variety of habitats including deserts, alpine forests, coastal scrub, tropical wetlands, tropical rainforests and forested snow-clad peaks in Australia. Dens are made in rock caves, rabbit burrows and hollow logs usually close to a water source. In suburban areas it can be common to see dingos scavenging for food or trying to eat domestic livestock.

In order to help the animals that are living on the edges of our cities we can help by creating Wildlife Corridors.

A wildlife corridor is an area of land that connects two habitat patches. Corridors allow animals to move between patches of habitat, which is important for their survival. Many urban areas have been developed without corridors in mind, and as a result, many animals are isolated in small patches of habitat. This can be a problem for these animals, as they may not have enough food or space to survive.

One way to create corridors is by planting trees and shrubs. These plants can provide food and shelter for animals, and they can also act as a physical barrier between roads and other development. Another way to create corridors is by leaving areas of land undeveloped. This provides animals with a place to live and move around without coming into contact with humans.

For example in Great Britain there are initiatives to create a “Hedgehog Highway“, over the past few years it has become common for people to have well manicured lawns and paved gardens. This has made it harder for small wildlife, like hedgehogs, to move between gardens as hedgerows have been removed and 6 foot walls and fence panels are now in their place. The initiative is asking for people to leave a small area of their garden wild for more biodiversity and to cut 6 inch holes at the bottom of a fence panel to create a wildlife corridor.

If you are interested in creating corridors in your city, there are a few things you can do. You can talk to your local government about setting aside land for corridors. You can also plant trees and shrubs in your yard or community garden. By creating corridors, you can help to ensure that urban wildlife has the space it needs to thrive.