You are here: Home / Blog / Venomous and Non-Venomous Snakes: What’s the Difference?

Snakes are a very large group of long reptiles. There are over 2,500 different species of snakes on our planet they are found on every continent in the world except Antarctica where it is too cold for them to survive. When most people think of snakes, they often will think of venomous snakes. After all, these are the snakes that can seriously injure or kill you with a single bite.

But what many people don’t know is that there are also many more non-venomous snakes, in fact less than one-third of all snakes are venomous and fewer than 300 may be fatal to humans.

So what’s the difference between them?

What are the main differences between venomous and non-venomous snakes?

There are several key differences between venomous and non-venomous snakes. Venomous snakes are those that have venom glands and fangs. This venom is used to kill prey or for self-defense. Non-venomous snakes, on the other hand, do not have these glands.

Venomous snakes are classified by being one of two venom types:

In the United States the majority of venomous snakes are pit vipers which include rattlesnakes, copperheads and cottonmouths.  Pit vipers inject hemotoxic venom into its victim. Among all pit vipers, the rattlesnake, including baby rattlesnakes, is the one most likely to bite you. They’re also responsible for almost all reported deaths from snakebite. 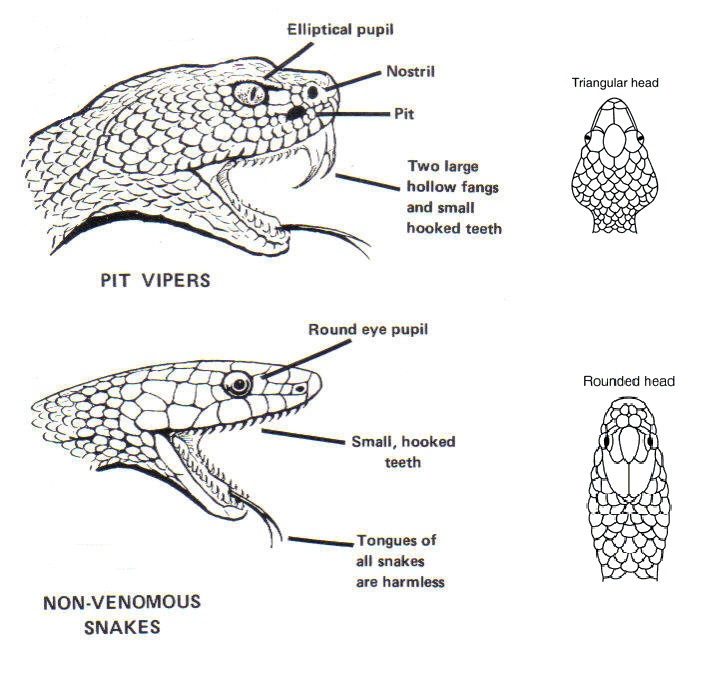 What are the similarities between venomous and non-venomous snakes?

Although there are some key differences between venomous and non-venomous snakes, there are also some similarities. Both types of snakes are cold-blooded, meaning they rely upon the Sun to regulate their body temperature. They also both have forked tongues that they use to sense their surroundings.

It can be difficult to tell venomous and non-venomous snakes apart by their behavior. Both types of snake can act aggressively if they are cornered or surprised.

All snakes are carnivores (meat-eaters). Snakes eat rodents and small mammals, birds, reptiles, fish, amphibians, insects and eggs. After eating, snakes become inactive while they digest their food. Digestion is an intensive activity, especially after the consumption of very large prey. In species that feed only at irregular intervals, their entire intestine enters a reduced state between meals to conserve energy and the digestive system is ‘up-regulated’ to full capacity within 48 hours of prey consumption.

Below is a list of probably the most commonly known venomous snakes:

How to Keep Snakes away From your Home

It is important to remember that snakes are classed as an endangered species and are under the protection of the Endangered Species Act.

If you have snakes on your property and you worried about your pets or children then you can look at using a snake repellent. This can either be in chemical or sound form, and can be a life saver for homeowners. These devices will emit odours or sounds which will make your home less appealing to snakes.

If you or a friend are bitten by a snake don’t move more than you have to, try to keep the wound below your heart, remove tight clothing, watches, or other jewelry, and try to remember what the snake looked like. Try to remain calm. The most important thing to do is get yourself to an emergency room.