Cats are often referred to as solitary animals. However, cats are actually highly social. An important difference in social behaviour between cats and dogs (to which they are often compared) is that cats do not have a social survival strategy, or a ‘pack mentality’; however this only means that cats take care of their basic needs on their own (e.g., finding food, defending themselves, etc.). It is not the same thing as being asocial.

Living with humans is a symbiotic social adaptation which has developed over thousands of years. It is certain that the cat thinks of a human differently than it does other cats (i.e., it does not think of itself as human, nor that the human is a cat). This can be seen in the difference in body and vocal language it uses with the human, when compared to how it communicates with other cats in the household.

Some have suggested that, psychologically, the human keeper of a cat is a sort of surrogate for the cats mother and that adult domestic cats live forever in a kind of suspended kittenhood.

With proper training and reinforcement of social behaviour, poorly socialized cats can become more social over time. A cat that has been made a ‘stray’ or has been mistreated, can in time, with patience and understanding, become a social, family cat.

Understanding your cat is an important part of your relationship with your pet. A cats body language can tell you a lot about its mood. Cats communicate a variety of messages using cat body language. Examples include arching their backs as a signal of fear or aggression, and slowly blinking to signal relaxation. Take a look below:

As is the case with dogs, the tail is often used as a signaling mechanism. A flick or twitch can indicate minor irritation and a tail held high suggests confidence. In addition, a cats tail may ‘wag’ or move rapidly to express a state of conflict. A cat who chooses to lie with its stomach and chest exposed conveys happiness, trust and comfort (this is also typical of overweight cats, as it is more comfortable for them), however, a cat may also roll on its side/back to be able to defend itself with all four sets of claws.

When the tail is erect for its full length, it is used as a greeting to another cat or to a friendly human and is an invitation for contact rubbing. The tail that is wrapped against the cats body may mean that the cat is contented or for a nervous cat, it is a defensive posture.

If the tail alone does not give you enough information about what the cat is thinking, take a look at their ears. Cats involved in a standoff will make threatening sounds, however, to really understand what is happening, check the ear position. The defenders ears will lie down flat against the head for protection.

The cat whose ears are lying flat, but with a twist, so that the tips of the back of the ear can be seen from the front, is the aggressor. Forward-pointing ears are used by confident, curious, cats to listen for sounds in front of them. A cat that is hunting prey (or playing) will also keep its ears forward to collect as much auditory information as possible in order to execute a successful pounce.

In a standoff situation, the defending cats pupils will be dilated to provide the cat with wider peripheral vision, an advantage in anticipating an attack. The aggressors pupils narrow to give him better depth perception, an advantage in judging where to attack. While dilated pupils can indicate fear, they are also indicative of the light conditions. In dim light the pupils expand to allow as much light to enter the eye as possible. 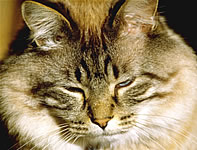 Perhaps one of the most wonderful of feline body signals, but one that is most often missed by even the most observant of cat owners, is the slow eye blink. Blinking is a very powerful communication as a reassurance signal and is commonly used between cats when they are sitting or lying in a hunched-up, sphinx-like position.

Slow blinking towards a cat shows that you are not a threat and they will most likely return the slow blink telling you that they feel comfortable with you and they like you. It is also a great way to say ‘I love you’ to your favourite feline companion.