The American Shorthair is the most popular and most prevalent breed of American cat.

American Shorthairs are medium to large sized cats, with powerful legs and strong paws. Their muzzle is squarish. Their coat is short, with the fur being thick, dense, and stiff to protect them from cold, moisture, and superficial skin injuries. 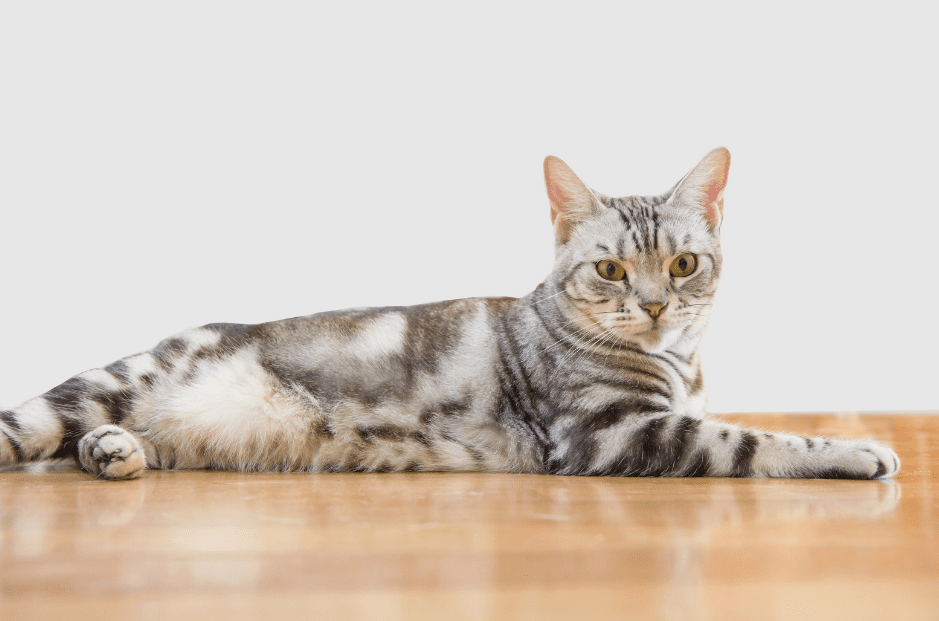 Their coat thickens up in the winter and sheds in the spring but still remains lighter and slimmer than its close cousin, the British Shorthair. American Shorthairs are very affectionate, long-living, and disinclined to behavioral problems; they get along well with other family members, including dogs.

The American Shorthair is also an excellent hunter, but its sunny and gentle disposition make it ideal for families with small children. Shorthairs tend to get overweight very easily.

An American Shorthair is not considered fully grown until 3-4 years old, when it attains the true strong athletic proportion of its breed. Males are usually larger then females and have definite jowls. It is perfectly happy as an indoor or outdoor cat.

American Shorthairs come in over a 100 different varieties of colors (blacks, whites, silvers, creams, reds, browns, greys, and tabby mixes), but their eyes, pad color, and nose will always match their coloring. Their tail tapers to a blunt tip and has no kinks.

Grooming for an American Shorthair is extremely easy, all they require is regular brushing and a wipe over with a damp chamois will make the coat shine.

You may wonder what an American Shorthair is. Technically, it is the breed of cat recognized by all the cat registries. Thus it has a set of confirmation standards specifying what the ideal specimen should look like. At a cat show, men will drag their wives over to the row of American Shorthairs and insist, “Now these are real cats!”

A well-bred American Shorthair is strong and muscular and appears able to take care of itself. This trait, along with its moderate pace and body, makes the breed appealing to people looking for a middle-of-the-road cat rather than one of extreme characteristics. Often a visitor to a cat show will spot an American Shorthair and say, “I have a cat just like that back at home.”

The breed is one of the few that are native to America; its roots are in the streets and barns of this great country. Because of this domestic heritage, you well may have a distant cousin of the fancy show cat you see peering at you from behind all those rosettes. But what makes this cat so special that it can win large ribbons and earn fancy titles such as grand champion or national grand champion?

Why is it allowed to compete with the elegant Siamese and the beautifully coiffured Persian?

I’ll tell you why; the American Shorthair you see at a cat show is the product of carefully planned and controlled breeding programs that have existed since the turn of the 20th century.

Years ago, a few dedicated people who noticed the beauty and temperament of native cats decided to preserve them as a pure breed, as was being done with other countries’ native cats, such as the Siamese, Korat, Birman and Chartreux.

After many generations of selecting breeding, today’s American Shorthair reproduces uniformly and predictably. This distinguishes it from similar looking cats on the street. 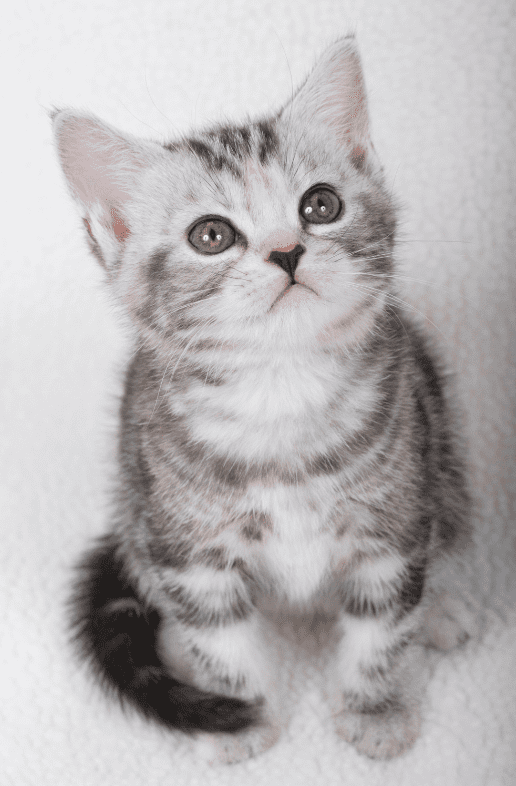 No documentation exists about when cats first came to North America, although we have some evidence that several cats sailed from England on the Mayflower.

America’s pioneer cats caught rats and mice on New England sailing ships, maintained order in barns, patrolled fields and warmed themselves at the hearths of settlers’ homes. In short, they were integral members of the community. Their ability to earn their keep was far more important than their appearance or purity of bloodline.

As the country became more tame, so did the cat. Soon settlers became interested in keeping cats for their beauty and companionship. As the cat fancy developed, people increasingly valued imported pedigree cats and disdained those that were common and underfoot.

Except for a handful of people who genuinely loved the look and temperament of our native cats, the growing number of cat fanciers did not appreciate the early American Shorthair.

The first registered American Shorthair came from Great Britain in the Early 1900s. To make the incongruity complete, the cat was a red tabby male named Bell of Bradford. No wonder the American Shorthair earned so little respect! Short Haired cats had lived in America for centuries, but it took a British import to get them into the registry books.

A long time passed before the breed “originally called Shorthair and then Domestic Shorthair before finally receiving the name American Shorthair in 1965” gained any recognition at cat shows. In 1963 Kay McQuillen, an all breed judge with the Cat Fanciers’ Association and a longtime breeder, wrote: “I can recall not too many years ago that when we Domestic breeders paid our entry fees and arrived at a show, we often found no cages available and no trophies or rosettes offered in the Domestic classes. The Domestics were tolerated only as extra points for the other cats.”

Once discussion about a new name began, the Breed’s image started to Improve. A definite correlation exists between the change in name to American Shorthair and the change in the breed’s fortune in the show ring. Thanks to many years of dedication and hard work by breeders who believed in the beauty and uniqueness of the American Shorthair, you now can go to a cat show and see Americans compete and win their fair share of prizes and admiration.

In 1972 two more cats, both silver tabby males, made breakthroughs. Joelwyn Colombyan, owned by JoAnne Landers was named All-American Cat of the Year by a leading pet publication, and Apache Chief Mateo owned by Alayne Poeld-Tyldsley, began his career as the top winning American Shorthair in CFA history.

Mateo was a national kitten winner and continued into the adult class with the Titles of 1973 Third Best Cat, 1974 Sixth Best Cat and 1975 Second Best Cat. He also was the only cat ever named Best of the Best two years in a row at the Madison Square Garden show, then sanctioned by CFA.

The success of these cats may make you believe that the only American Shorthair winners are silver tabby males. Although more silver tabbies exist than any other color, quite a few Americans in the rarer colors have won at shows. Recently brown tabbies have dominated the winner’s circle, accounting for five of the last six national-winning American Shorthairs in the CFA. This year’s best American is Toraneko Don Juan of Sol Mer, a gorgeous brown tabby male also named CFA’s Second Best Cat. 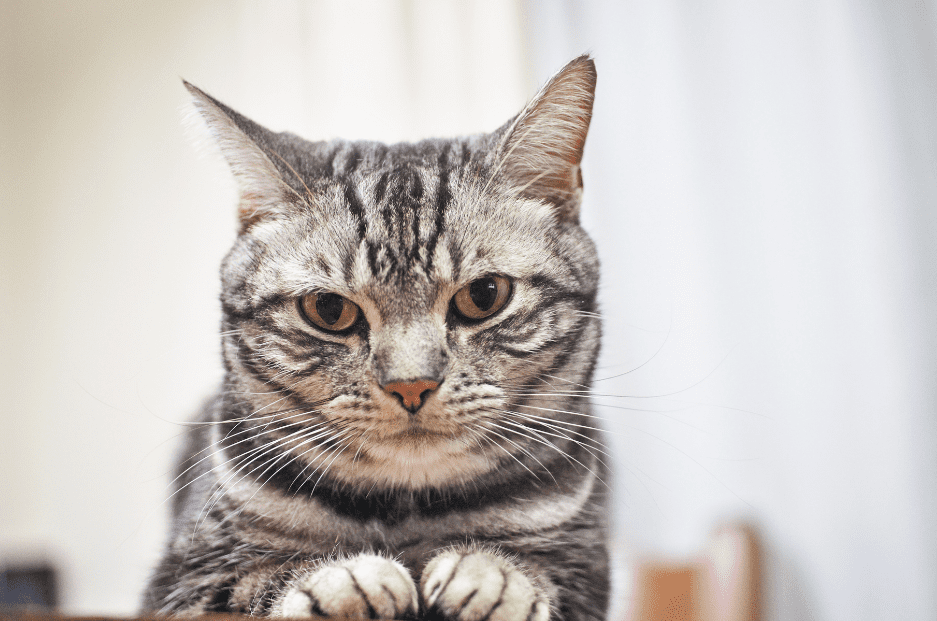 Now back to the original question: How do these cats differ from those you may see on the street or on your couch? Look closely at one of the show quality American Shorthairs pictured here. Can you see the sweet, open expression and the large, luminous eyes? The eyes should be round on the bottom and almond shaped at top with a slight upward tilt to the outer edge.

The cats muzzle should be square and long enough to grasp prey, at least theoretically. (Despite its hardiness, the American Shorthair is an indoor cat). The body should be well muscled and powerful. “The American Shorthair Is a true breed of working cat,” the CFA standard says. “The confirmation should be adapted for this with no part of the anatomy so exaggerated as to foster weakness. The general effect should be of a strongly built, well-balanced, symmetrical cat with confirmation Indicating power, endurance and agility.”

A noticeable difference in size exists between mall and female Americans, and males have jowls (chubby cheeks). In both sexes, the coat is short, lustrous, resilient and resistant to the elements. The overall picture is of a cay that could care for itself, if necessary, its charming face, however, guarantees it a warm bed and regular meals.

Basically, the cat Is America’s domestic working breed without the rough edges, which have been eliminated through many generations of selective breeding.

Even more exciting than their beauty is the fact that American Shorthairs make great pets. Because the cat is bred for strength, it is extremely healthy. If you adopt an American Shorthair, you probably will visit your veterinarian only for your cat’s yearly checkup and boosters.

The American has an average life span of 15 to 20 or more years, so when adopting one, plan on a long-term commitment.

The American Shorthair sometimes behaves like a dog. It will greet you at the front door and follow you from room to room. Usually an American prefers not to be picked up but loves being in your lap or by your side. You probably will be able to train your cat to come when called, to fetch toys, to stay off counters and tables and to use a scratching post.

Most American Shorthair owners enjoy the fact that these are quiet cats; in fact, hearing such a robust cat come forth with the smallest of meows is a constant source of amusement.

These cats not only tolerate children, but they actually seek out kids at playtime or naptime. I have three children under the age of six, so I can testify to the American Shorthair’s ability to handle exuberant loving.

My cats have been dressed in doll clothes, pushed around in buggies, included in puppet shows and involved in bath time; never has a cat raised a paw in anger or attempted to bite. Generally, these amiable animals keep purring through it all. When the going gets rough, they just leave and return when things are calmer.