The Balinese is a breed of oriental cat with long hair and Siamese-style markings, or points. They resemble a Siamese with a medium-length silky coat and a plumed tail, but not nearly as fluffy as a Himalayan, and they require much less grooming. Balinese are extremely intelligent cats, although less talkative than their Siamese ancestors. 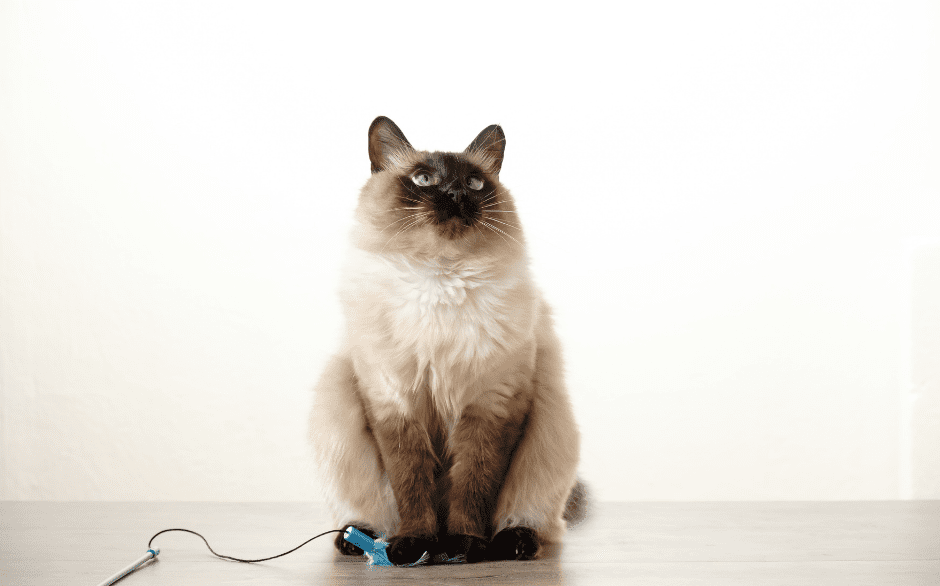 The Balinese was originally registered as a ‘longhaired Siamese’, and examples were known from the early 1920s. The occasional long-haired kittens in a Siamese litter were seen as an oddity, and sold as household pets rather than as show cats.

This changed in the mid-1950s, when two breeders, Mrs. Marion Dorsey of Rai-Mar Cattery in California and Mrs. Helen Smith of MerryMews Cattery in New York, decided that they would commence a breeding program for the long haired cats.

Helen Smith named the cats ‘Balinese’ because she felt they showed the grace and beauty of Balinese dancers, and because ‘longhaired Siamese’ seemed a rather clunky name for such graceful felines. The breed became quite popular after this, and a number of breeders began working on ‘perfecting’ the Balinese appearance.

This led eventually to the development of two entirely separate ‘strands’ of Balinese cat – some owners prefer a traditional or ‘apple-headed’ Balinese, while breeders and judges tend to prefer a more contemporary appearance.

Like the Siamese, there are now two different varieties of Balinese being bred and shown – ‘traditional’ Balinese and ‘contemporary’ Balinese. The traditional Balinese cat has a coat approximately two inches long over its entire body and it is a sturdy and robust cat with a semi-rounded muzzle and ears.

The traditional Balinese closely resembles a Ragdoll cat although they do not share any of the same genes or breeding other than having a partially Siamese ancestry. A ‘contemporary’ Balinese has a much shorter coat and is virtually identical to a standard show Siamese except for its tail, which is a graceful silky plume. 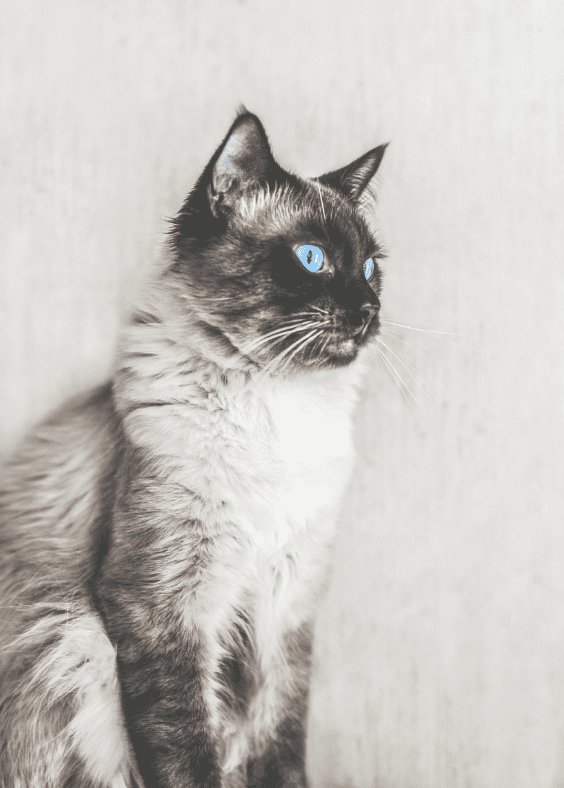 Depending on the cat association, the terms “Balinese” and “Javanese” mean different things. In Europe, “Javanese” refers to a solid-coloured Oriental Longhair. However, for this FAQ, we will use these terms as used by American cat associations.

Basically, Balinese and Javanese are longhaired cats in the Oriental family, similar in both type and personality to a Siamese. A show-quality Balinese or Javanese will have a long, lithe body, tubular when the cat is stretched between your hands.

Balinese and Javanese should be muscular, and will be deceptively heavy when lifted. Legs are long, fine-boned, and slender, with small paws.

The head is wedge-shaped, with large, alert ears which follow and complement the shape of the wedge. The eyes are distinctly Oriental, slanted slightly to fit in with the overall head shape, and sapphire blue, the deeper the colour the better. The nose is straight, with no break or rise between the eyes.

Balinese and Javanese both have longer hair than a Siamese, but don’t have dramatically long fur like a Persian or Maine Coon. The body hair should be silky and close-lying, not “fluffy”. The fur on the tail is longer — about two or three inches — and when brushed out forms a full, graceful plume. Most people seeing a Balinese or Javanese for the first time may mistake it for a Siamese, until they see the gorgeous, full tail.

Colour is the difference between the Balinese and the Javanese breeds. Like Siamese, Balinese and Javanese are “pointed” cats, which means that the face, legs, and tail are a darker colour than the body colour. The darker colours are referred to as the points.

An easy chart for reference:

The body colour is lighter than the point colour, although it will be considerably lighter in a younger cat. The body colour tends to darken with age. Point restriction (restriction of the darker colours to the face, legs, and tail) is desirable. On lynx-point Javanese, some “shadow striping” (light striping on the body) is permitted but not desired. A clear coat with excellent point restriction is best. 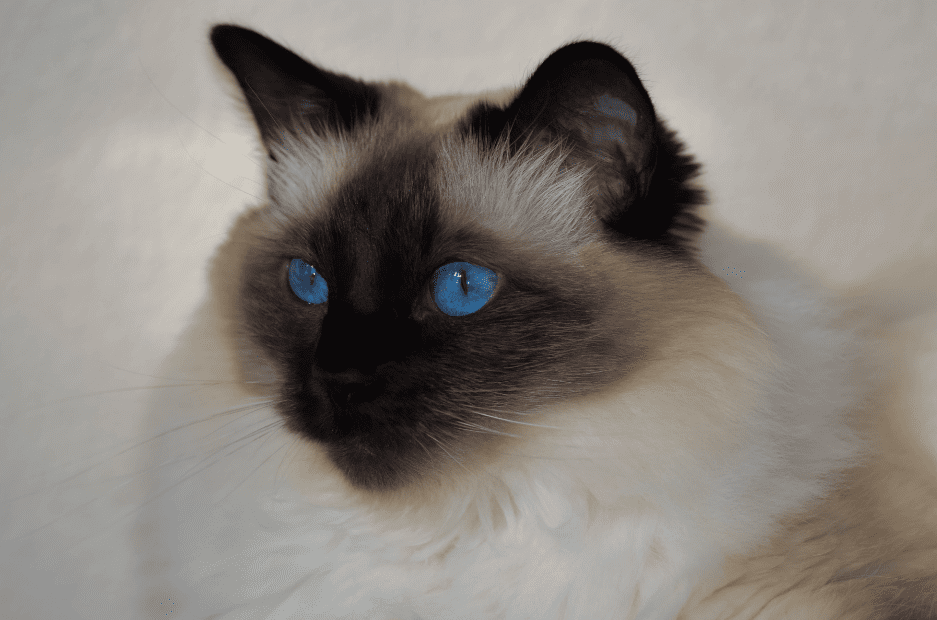 Balinese and Javanese are active, busy cats, like their related breed, the Siamese. Balinese and Javanese love people, and are constantly following “their” people around the house and getting underfoot. They can be quite demanding when they want attention, but they are also true cuddlers and lap cats. They require a lot of interaction and active play.

Balinese and Javanese also love high places; if you don’t provide somewhere high for them to perch, they will find a spot of their own. Many love to ride on the shoulders of their favourite humans.

Both Balinese and Javanese need toys, but fancy ones aren’t necessary. Many love something simple, such as a ping-pong ball slit enough to drop in a few grains of rice for noise, or a peacock feather. A bored Balinese or Javanese may find something else to make into a toy, such as pens, papers, boxes of envelopes, or other things you may wish not to become toys!

Balinese and Javanese are insatiably curious and quite fearless. There is little they will not investigate: a noise, an open cupboard, water dripping from a faucet, a toilet flushing, the inside of a shopping bag, a running vacuum cleaner, a blow dryer.

Because of this curiosity, their lithe build, and a penchant for getting toys under things, they are also accomplished contortionists who can scoot under low couches, beds, and cabinets with astonishing ease. Beware of this ability in strange houses and hotel rooms; you may find your Balinese or Javanese taking a tour of the air conditioning ducts! The only hole too small for a Balinese or Javanese is one the cat cannot squeeze the head through.

Like their cousins, the Siamese, Balinese and Javanese are “talkative” cats, with loud voices they seem to use at any opportunity. Many just seem to “chat” for no apparent reason. The quality (and quantity) of the voice varies from cat to cat. Some can be very quiet — others rival Joan Rivers for talkativeness.

Is This Breed for Me?

Balinese and Javanese need human contact. If you don’t have a lot of time for a cat, a Balinese or Javanese may not be the right breed for you. They do fine in a household where everyone is away all day, but be prepared to spend some time every day playing and interacting with the cat. Sometimes, that just means letting the cat sleep in your lap while you watch TV, or it can mean up to an hour of all-out play. They are marvelous jumpers, and toys that exploit this ability are fun for the cat and amusing to watch.

If you’re looking for an active, fun, devoted companion with elegant good looks, a Balinese or Javanese is a wonderful choice. The longer hair softens the Siamese type and adds refinement.

Like many active cats, Balinese and Javanese get underfoot a lot. It may not be the best choice for someone with mobility problems. They are good with children and keep up admirably with even the most active kids. They do best in households with at least another cat for company if their people are away all day.

The main concern when showing a Balinese or Javanese is keeping the weight ideal. These are lithe cats with fast metabolisms, but some cats may not be able to free-feed without getting fat. Some Balinese and Javanese cats can free-feed without trouble, but others, particularly alters, may eat more heavily.

Balinese and Javanese need little daily grooming if they are pets, as their silky coats do not mat. They enjoy being combed and fussed over, but their coat will not suffer unduly because of it. A Balinese or Javanese being shown may need more care than that, including regular baths to keep the coat, particularly the tail, in top condition.

Balinese and Javanese are intelligent cats, which means that they can be trained, but also that you may find them training you!