Birmans differ from conventional colourpoint cats by their white paws called gloves. The coat is medium-length, not as long and thick as a Persian’s, and does not mat. Their most striking feature is their clear blue eyes, which remain blue throughout their life. Some have described their eyes as ‘Twin Pools Of Serenity” 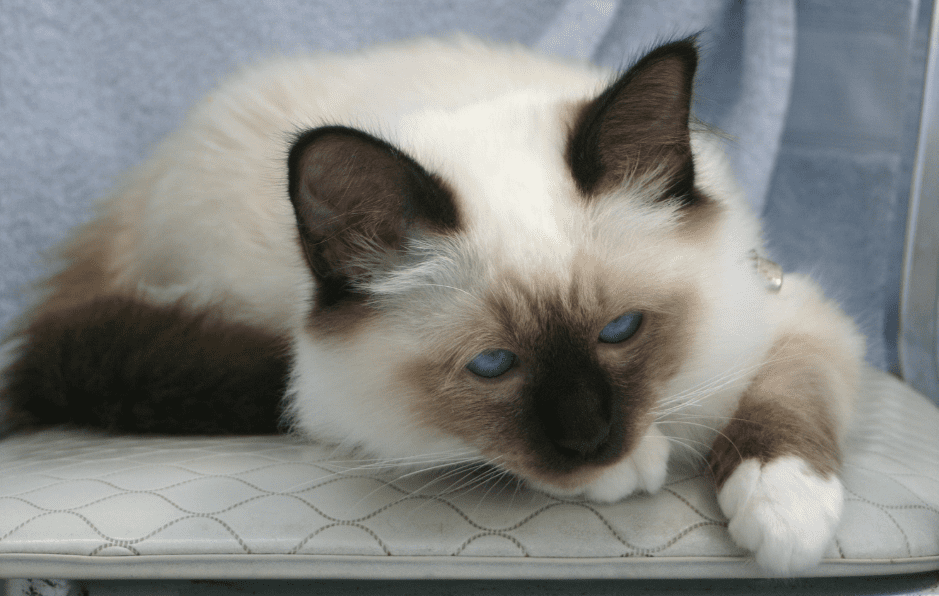 The Birman is said to have originated in western Burma, and certainly cats with similar markings are recorded in documents from ancient Thailand. One story claims that a pair was given as a gift to an Englishman named Major Gordon Russell and his friend August Pavie by the priests of the Khmer people; however, what is suspect is the year that he and his friend, Auguste Pavie, were actually in the Far East.

As research dictates, it appears to be 1898, which seems to be accurate as history indicates certain tribal revolutions at that time, which relate to Buddhism and additional religious factions. Some sources quote 1916 or 1919 as the dates of the revolution, but confirming any of these dates has proved questionable and as it is acknowledged that Birman cats were first sent to France in 1919, therefore 1916 and 1919 would be more appropriate, as the priests gave the men two Birmans in thanks for saving their sect from decimation by the Brahmins: The story is relatively hazy, but claims that two cats were sent to France in 1919 to August Pavie and Major Russell Gordon, and breeding started immediately. The male died on the voyage, but the female survived and was in kitten.

However, if the revolution of the Brahmins had been in 1898, there would have been too much of a gap (21 years) before the two men received the birmans and this seems too long to be credible. 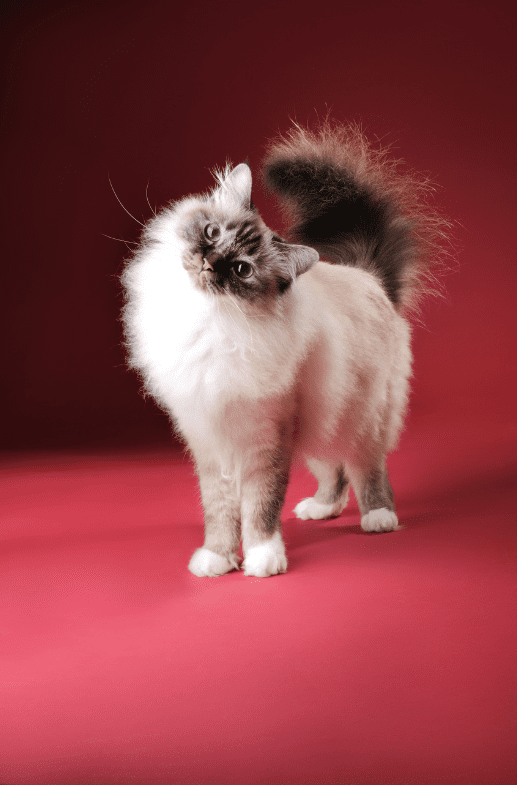 What is more likely (as quoted by professor Jumand in 1926 in ‘Le Chat’), is that two cats, a male and a female (whose name was Sita), were stolen and given to an American millionaire, Mr Vanderbilt, by a disloyal servant of the temple of Lao-Tsun, whilst Vanderbilt was sailing in the Far East. It is then alleged that the pair were given to a woman called Mme Thadde Hadisch.

The male (once again) died on the boat, but the female was pregnant, and gave birth in the French town of Nice in 1920 to a litter of kittens. One of the offspring was splendid, and was then named Poupee. Poupee was believably bred to a Laotian Lynx.

Baudoin-crevoisier, who was documented as a top Birman breeder, confirmed this in an article written in 1933, “Poupee could not be bred by a male of that breed, but was bred to a Laotian Lynx cat belonging to a doctor in Nice. This type of cat resembles the Siamese, with very blue eyes, and this breeding produced young mongrels of Birmans and Laotians.

Through successive breeding was born a perfect result – Manou de Madalpour, whose marks resemble her mother, Poupee.” Baudion then wrote in 1935, “This female was next bred to a male Siamese, which, at that time was baptised for the circumstances –Laotian Cat.”

In 1933, Marcel Reney, who was attempting to unravel the truth of this mystery, wrote to the doctor in Nice, M. Prat. He wrote back, “We have had indeed several Siamese cats but know nothing of the origins. I know nothing of Mme Hadisch from Vienna.”

Marcel Reney also wrote to M. Guy Cheminaud, a hunter from the Far East who lived in Laos, and whose books on hunts of feral animals were illustrious, to determine what his view was on the “Lynx cat of Laos?” He replied, “There are no Laotian cats as a species distinct from the Siamese cat!”

Jumand and Baudoin’s entire history then fell through, as the most significant witness, the owner of the legendary “Laotian Cat” knew nothing of either the lynx cat or Mme Thadde Hadisch.

Mmme Marcelle Adams, who owned Manou de Madalpour, avowed to Marcel Reney that a certain Mme Leotardi, before strangely vanishing, had narrated the tale as Jumand and Baudoin wrote it down. In 1933, after an article by Marcel Reney was published in “Chasse, Peche, Elevage” trying to gain new information, Baudoin wrote in 1935 in “Son Altesse le Chat”, “Aside from the writings of Sir Russell Gordon and Auguste Pavie, no document gives the exact origin of these cats.

After six years of personnel research and ten years breeding in France, the Sacred Cat Of Burma remains still as mysterious about it’s origin as it was originally. No-one has produced anything of new import which I have been able to see, and as a consequence, to study.”

Nothing more can be found on the subject and there is still no proof as of who acquired the pair of cats. However, the breed known as “Sacre de Birmanie” was registered with the French Cat Registry in 1925. The Birman breed was almost wiped out during World War II.

Only two cats were alive in Europe at the end of the war, a pair named Orloff and Xenia de Kaabaa, both belonging to Baudoin-crevoisier. The foundation of the breed in postwar France were offspring of this pair. Manou, Lon saito, Djaipour, Sita 1 and Sita 2, and they had to be heavily outcrossed with long-hair breeds to rebuild the birman breed. By the early 1950’s, pure birman litters were once again being produced. The restored breed was recognised in Britain in 1965 and by the American Cat Fanciers’ Association in 1966.

In reality modern western Birmans are a hybrid of Siamese and Persian breeds and may differ considerable from Burma temple cats from which they originally obtained their white gloves.

Birmans have been bred as companions for many generations, and, as such, are very loving. They frequently take a genuine, affectionate interest in what their owners do. 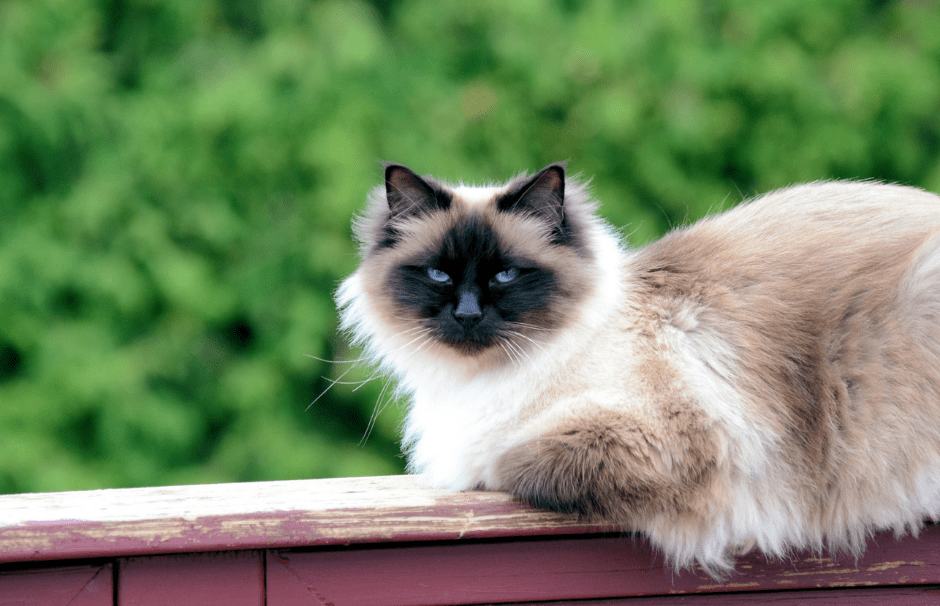 Many years ago, before the birth of Buddha, the Khmer people of Burma built wonderful temples to Tsun Kyan-Kse, the Goddess with the sapphire eyes, who presides over the journey of souls, and authorize the priests to live again in a holy animal for the term of its natural life, before taking again in a divine body of a great priest.

The most beautiful of these temples, built on the sides of Mount Lugh, contained a dazzling solid gold statue of the Goddess. The priests of the temple also kept one hundred pure white cats to guard the temple, but also as companions. The elderly head priest, Mun-Ha, had a particularly loyal feline friend, Sinh, whose eyes were yellow in the reflection of the golden body of the Goddess with the serene eyes.

One tempestuous night, Phoums from Siam attacked the temple overwhelming the Kittahs, and killing the priest Mun-Ha. As he sat dying in his golden throne, Sinh leapt onto his head, and, as he sat rigid before the statue of the Goddess, a miracle transpired.

His appearance was transformed to one of immense exquisiteness. His impeccable white coat became creamy and golden tinted, his ears, nose, tail and legs became dark, like the colour of the earth, but left his paws white, and his eyes glowed the same sapphire as the Goddess. He then stared at the south door. the priests, acting upon his direct look, rushed to close the heavy bronze doors.

Eventually, temple was devoid of invaders once more. Sinh, however, stayed upon Mun-Ha’s head for the next seven days with neither food nor water, before, facing the Goddess, he died – carrying Mun-Ha’s soul to Tsun Kyan-Kse… and when, Seven days later, the amassed priests consulted the statue on the succession of Mun-Ha, the remaining ninety-nine cats of the temple ran up, all of which had been transformed like Sinh, surrounded the youngest of the priests. Therefore, the reincarnated ancestors were chosen by the Goddess’s heavenly spirit.

The legend also dictates that when a priest died, his soul was channelled into the body of a cat and upon the cat’s death the priest’s soul had entered heaven– although, according to Major Russell Gordon, ”But woe also to he who brings about the end of one of these marvellous beasts, even if he did not mean to. He will suffer the most cruel torments until the soul he has upset has been appeased.”

The legend fails to explain the genuine, scientific derivation of these cats, and the mystery surrounding their initial background will probably never be revealed. However, legends often have some truth in them.