The Bombay cat was created in 1958 in Louisville, Kentucky (USA), when Nikki Horner of Shawnee Cattery deliberately bred an American shorthair with a Burmese for the purpose of creating a domesticated cat that resembled a wild panther. The offspring of this breeding did indeed resemble the black leopard of India. The name came from the Indian city of Bombay (now Mumbai). Horner called her creation the “patent leather kid with the new penny eyes.” 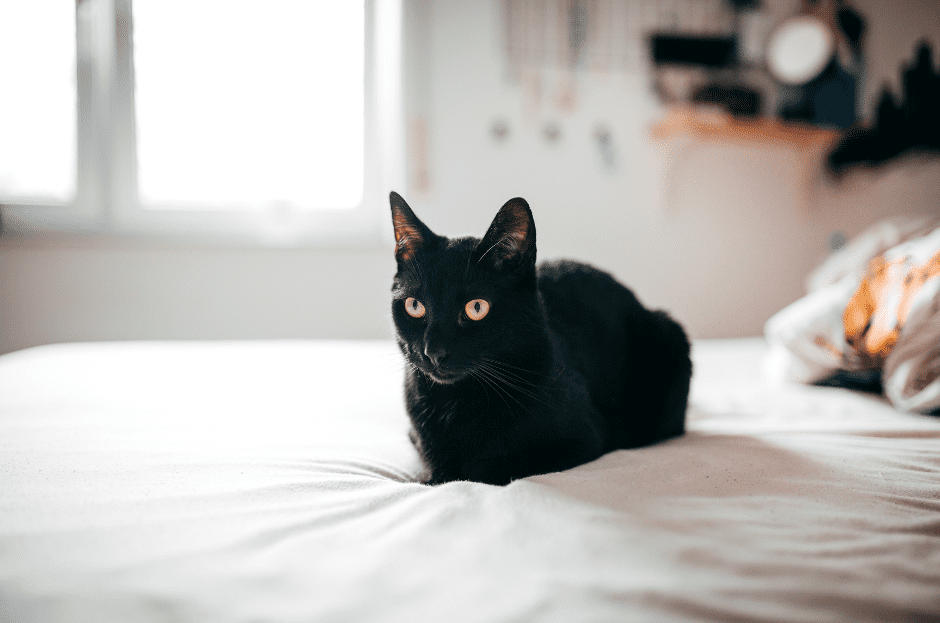 The Bombay is a muscular yet agile cat with a black coat. The heads of Bombay cats are rounded and wide with a short tapered muzzle. The eyes, which are of golden or copper color, are rounded and set wide, and their ears are broad, slightly rounded and medium sized and, like the eyes, set wide. The Bombay has a coat that is short, satiny and tight to the body. Bombay cats do not require grooming, although petting the cat will keep their coat shiny and will also remove dead hair. A rubber brush can help when the cat sheds larger amounts of fur (uncommon). If the cat is fed a balanced diet, the coat will shine and the cat’s naturally energetic personality will become evident.

Bombay cats crave human affection; while this can be said of most felines, the Bombay will, if pleased by the amount of affection being given, purr loud enough to be heard over 15 feet away indoors! Bombay cats are quiet and watchful, prefer the indoors and can be affected by loud intrusive noises. An uncommon side effect of loud noises in Bombays can result in them losing fur from their stomachs and near their tails. Should this occur, simply keep the cat indoors or away from loud noises for a short period and make sure they have somewhere they can hide. Preferred locations noted from experience are:

Bombay cats are by nature lap cats; they are almost heat-seeking in their lifestyle and are known to jump up their owner’s backs and rest around their neck if they feel they are being ignored. While Bombay cats will tolerate other breeds of cat, they are dominating over them and will not take well to being treated as a subordinate by other cats. Bombay cats seem to get on exceptionally well with dogs due to dogs’ sensitivity to hierarchical relations, which the Bombay will exploit to the full. Both males and females are excellent pets.

These cats are smart, agile and inquisitive. They will often seek out human interaction. Visitors to the home are best advised not to hide things in pockets or packages that the cat might find interesting, as Bombay’s will investigate packages and will commonly chew through carrier bags and containers to get at meat. This can lead to problems as they will seek out chicken bones, which have been known to cause damage to their throats after getting into a poorly secured bin containing chicken bones. These cats are head-bumpers and nose-rubbers, Some can be very “talkative” and have distinct “voices”. These cats love nothing more than to be held and fussed over.

Quiet, sensitive, reserved and intelligent, the Bombay is suited to life in a quiet home, where it is affectionate to the whole family.

The Bombay was developed by Nikki Horner, a breeder in Louisville, Kentucky. She set out to create a “miniature black panther” by crossing sable Burmese with a solid black American Shorthair. Her first attempts in the late 1950’s were disappointing. A few years later, working with different breeding stock, she began to get the results that she was looking for: a cat with good muscular development and a very short, close-lying black coat. Recognition and acceptance of the new breed by the registering associations took 18 years; the Bombay was accepted for championship in CFA in 1976. 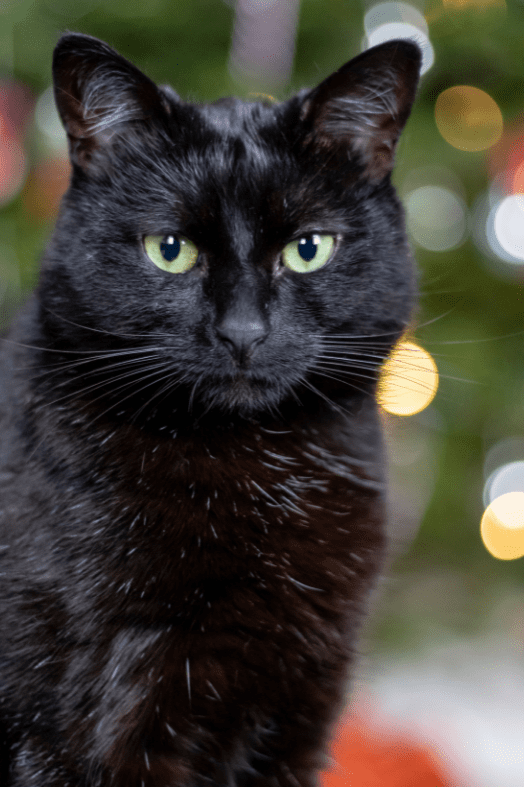 As a consequence, the Bombay shares many physical characteristics with the Burmese. Nikki Horner considers the Bombay a “black Burmese”, but other breeders point out the physical differences. Bombays tend to be a little larger, with longer bodies and longer legs than the Burmese, and have a less pronounced nose break.

The gene for the black coat is dominant, but many Bombays still carry the sable color as a recessive. A sable-colored kitten may appear in a litter from a Bombay x Bombay breeding. If both of the parents are heterozygous for black, one in four kittens will be sable, on average. A Bombay x Burmese breeding will frequently produce some sable kittens along with the black ones.

These “sable Bombays” are generally sold as pets, since they cannot be shown as Bombays. One association, TICA, allows these kittens to be registered and shown as sable Burmese, but the Bombay body type is sufficiently different from Burmese that they generally are not show quality. However, a person looking for a pet Burmese might do well to contact Bombay breeders, since only a trained eye would notice the differences between a “sable Bombay” and a pure Burmese.

The Bombay breed also shares an unfortunate trait with the Burmese. The “Burmese Craniofacial Defect” is a genetic disorder that affects the development of the skull in the fetus. Occasionally, kittens from lines that carry this defect will be born with severely deformed heads and must be euthanized at birth. The mode of inheritance of this anomaly is still poorly understood. The defect is of no concern to pet owners because it only affects newborns, but anyone who is considering breeding Bombays or Burmese and who is unwilling to deal with this defect must perform extensive pedigree research to find bloodlines that are free of the defect. A few lines of “traditional” Bombays and Burmese that are free of the defect do exist today. This is a complex and emotionally-charged issue among Burmese and Bombay breeders. Anyone who is interested in this subject should obtain the published research and should not rely on hearsay. 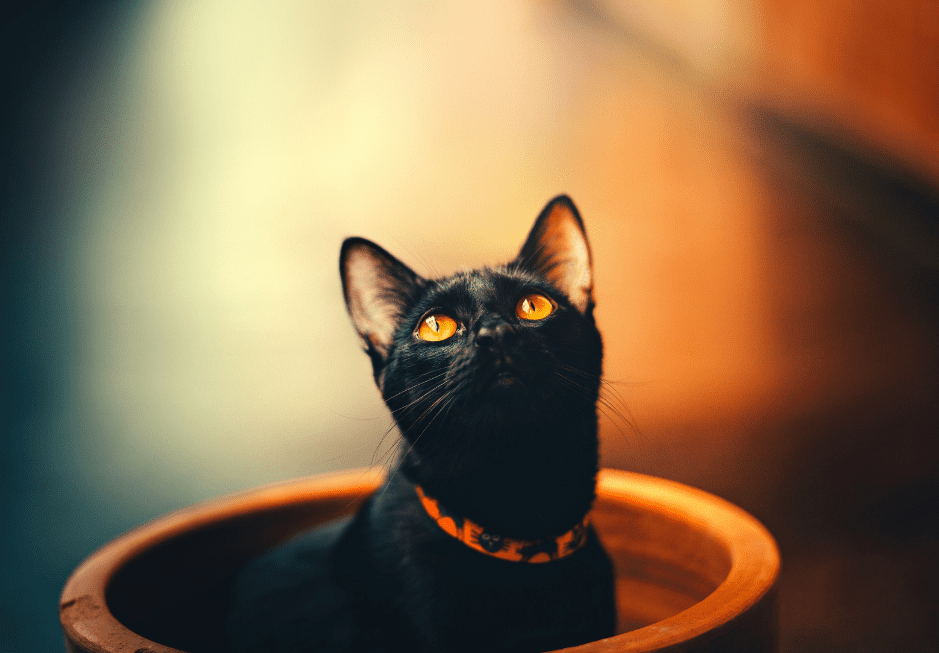 
The Bombay also shares many of the behavioral characteristics of the Burmese. They are adaptable to apartment living and are generally calm. A Bombay will often accept dogs in the household more quickly than it will adapt to the other cats. The Bombay often wants to be the dominant cat in the household.

They are intelligent, actively seek interaction with humans and love to play games. Many retrieve and do tricks. Some have been sucessfully leash-trained. Like Burmese, Bombays are heat-seekers, and often like to sleep under the bedcovers.

Both Bombays and Burmese have a voice that is distinctive, but not as loud or harsh as the Siamese voice. Some individuals are quite talkative, but others rarely vocalize.

Bombays reach sexual maturity relatively quickly, so owners should plan on spaying females and neutering males between 6 and 9 months of age. A few males have been known to sire litters at 5 months of age. Their physical development, however, is somewhat slower. A Bombay male may not reach his full muscular development until he is almost two years old. An adult Bombay male will typically weigh between 8 and 11 pounds; females between 6 and 9 pounds.

Bombays generally have strong appetites. While most Bombays can free-feed without becoming overweight, some Bombay owners find that they must ration the food or switch to a low-calorie feed. Most breeders use and recommend a high-quality dry food, but will supplement this with raw meat to put on more muscle for showing. The use of raw meat is risky, however, because of the danger of contamination.

The tight, short coat sheds very little and requires practically zero maintenance. The Bombay is completely capable of grooming itself, but a rubdown with the palm of your hand or a rubber brush is always a welcome activity. There is very little seasonal variation in the coat.

In preparation for showing, exhibitors generally bathe the Bombay three to four days before the show. This gives the coat time to recover some of the natural oils that help give it the proper sheen and texture. On the day of the show, a rub with a chamois cloth puts a final polish on the coat. No texturizers, glosses, or powders are ever needed on the Bombay coat.