The California Spangled Cat is a breed of cat. They were bred to resemble spotted wildcats, like the endangered species ocelot and leopard. They are a rare breed, and usually expensive, priced between $800 to $2,500. They were originally bred in the 1980s.

Inspired by the poaching death of a leopard, the anthropologist Louis Leakey, motivated Paul Casey to breed a domestic cat resembling a small leopard, and that this would emphasize how important it is to preserve the leopard.

California Spangled Cats are a crossbreed of many strains of cat. Despite their wild appearance, they are completely domestic. 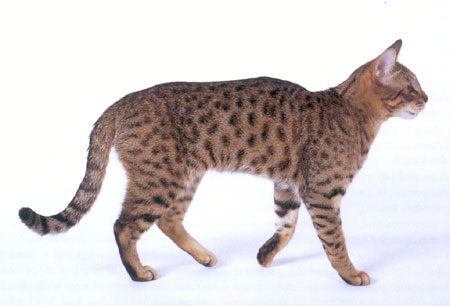 The California spangled cat is a spotted feline with the look of the wild and the heart of a domestic. Specifically bred to resemble spotted wildcats such as the ocelot and leopard, the spangled cat was created to make a statement about the plight of the world’s dwindling wildcats. Ironically, the spangled cat is one of the most rare of cat breeds. Nevertheless, the spangled has a small but dedicated following with people who love the breed’s active personality and exotic looks.

A conversation with the late anthropologist Louis Leakey inspired Paul Casey, animal advocate and writer, to undertake the creation of the spangled cat.

When working on a writing project in Africa in 1971, Casey visited the famous Olduvai Gorge where years before Louis and Mary Leakey had discovered fossils of a new hominid species.

While there, Casey was shocked to hear that one of the last breeding leopards in that territory had just been killed by poachers. In their later conversation in California, Casey and Dr. Leakey explored the idea that if people had a domestic cat that looked like a mini-leopard, they would have a concrete reason to relate to the conservation problem. In other words, people wouldn’t want to wear fur coats that looked a lot like their beloved house pets.

The idea stuck with Casey and in the mid-1970s he drew up an 11-generation blueprint for his lap-sized leopard, using traditional Siamese, Angoras, British shorthairs, American shorthair, Manx, and Abyssinians. These breeds gave Casey the core bloodline and each was introduced in a precise order to provide a specific characteristic to the breed. No wildcats were used in the breeding program.

After he developed the core line, Casey added a spotted street cat from Egypt that possessed the feral, primitive look he wanted: a domed forehead, heavy musculature, wide-set eyes and ears, and well-defined whisker pads. And, of course, spots.

This Egyptian cat, Casey claims, is a descendant of the original spotted cat worshiped in ancient Egypt. He also found that the Egyptian cat had a wonderful, social temperament, a bonus for the breed. Lastly, Casey added a short haired, spotted Malayan domestic cat that added musculature and a short, soft, velvety coat.

By 1985 Casey had the look he wanted for the spangled cat. He gathered a small group of breeders to help promote and propagate the breed, and formed the California Spangled Cat Association (now called CSCA International), not only to further the spangled cat but to promote protection of wildcats as well. 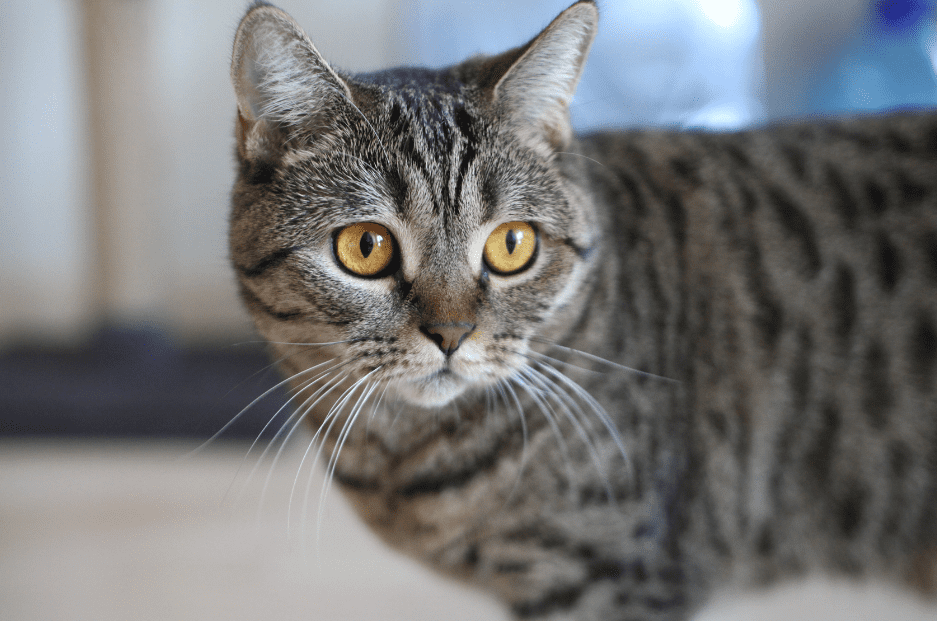 To gain national attention for the spangled cat, Casey introduced the cat-loving public to his creation through an advertising campaign in the 1986 Neiman-Marcus Christmas catalog.

The cats were featured in a two-page spread as “his and hers” gifts priced at $1400 each. The promotion was controversial, particularly so since the same catalog featured fox, beaver, mink, coyote and ermine fur coats.

This advertising strategy managed to anger just about everyone, from the animal-rights people, who were against deliberate breeding of domestic cats, to the cat fanciers, who felt that the three spotted breeds already accepted were plenty.

Even the Neiman-Marcus folks were mad; they weren’t pleased that Casey was speaking out against wearing furs.

However, it’s rightly said that there’s no such thing as bad publicity, because the advertising and the controversy brought the spangled cat exposure it otherwise never would have had.

Neiman-Marcus received hundreds of inquiries about the cats, and took many more orders than Casey could fill. The demand for the cats depleted his stock, which slowed the breed’s development.

Today, numbers are still small and acceptance in most of the cat associations has eluded the California spangled cat. However, a small, devoted group of breeders and fanciers are working with the breed and continuing their conservation efforts. Members of the California Spangled Cat Association think of these cats as little ambassadors for their wild cousins.

The forelegs are carried at a nearly 90-degree angle at the elbow, allowing the body to ride low, heightening the wildcat effect. Overall, the spangled creates the illusion of a much larger cat.

The face is expressive with wide, well-contoured, sculpted cheekbones, well-developed whisker pads, and a strong chin and jaw.

The muzzle is broad, medium length and well-developed. Medium-sized, rounded ears set high on the head and well back from the face add to the wild look. The almond-shaped eyes are set well apart and slope gently.

However, the spots set the breed apart. The short coat shows off the pattern nicely. Blocked or rounded spots are preferred.

Round, square, oval or triangular shapes are permissible, while crescent, eyelet, or fish scale markings are considered faults. Tabby-like barring may be present on the head, chest, and legs, but the body is unmistakably spotted. The spots may be grouped into rosette patterns.

Because of the diversity of colors used in the breed’s creation, the spangled cat comes in a wide palette of spotted colors: silver, bronze, gold, red, blue, brown, black and charcoal. The spots themselves are dark, well-defined, and sharply contrasted to the background color.

Two other varieties exist as well – the snow leopard and the king spangled. The snow leopard resembles the central Asian great cat by that name. A light background, vivid spots, and blue eyes give this variety a particularly dramatic look.

Born white, the snow leopard develops markings as she matures. The king spangled resembles the endangered king cheetah. At birth, the king spangled is completely black except for the face, legs and underbelly.

In adulthood, strap-like segments and rows of diamond-shaped markings join at the cat’s sides. The face shows pale tear-stain markings which extend from the inner corner of the eye down to the outer edge of the mouth