A Cornish Rex is a breed of domestic cat, with no hair except for down. Most breeds of cat have three different types of hair in their coats: the outer fur or “guard hairs”, which is about 5 cm long in shorthairs and 10cm+ long in longhairs; a middle layer called the “awn hair”; and the down hair or undercoat, which is very fine and about 1 cm long. Cornish Rexes only have the undercoat.

The coat of a Cornish Rex is extremely fine and soft to the touch. However, their light coat means that they are only suitable for indoor living in warm and dry conditions. Consequently, these cats tend to hang around light bulbs, the tops of computer monitors, and other warm places. Cornish Rexes also have a mild cheesy smell peculiar to the breed; this odour comes from scent glands in the paws.

The Cornish Rex is an adventurous cat and is very intelligent. It can readily adapt to new situations and will explore wherever it can go, jumping into refrigerators, examining washing machines, etc. Humans often consider its antics to be deliberately mischievous, but this is anthropomorphism. The Rex is extremely curious, seeks out the company of people and is friendly towards other companion animals. It is a suitable pet for timid children. 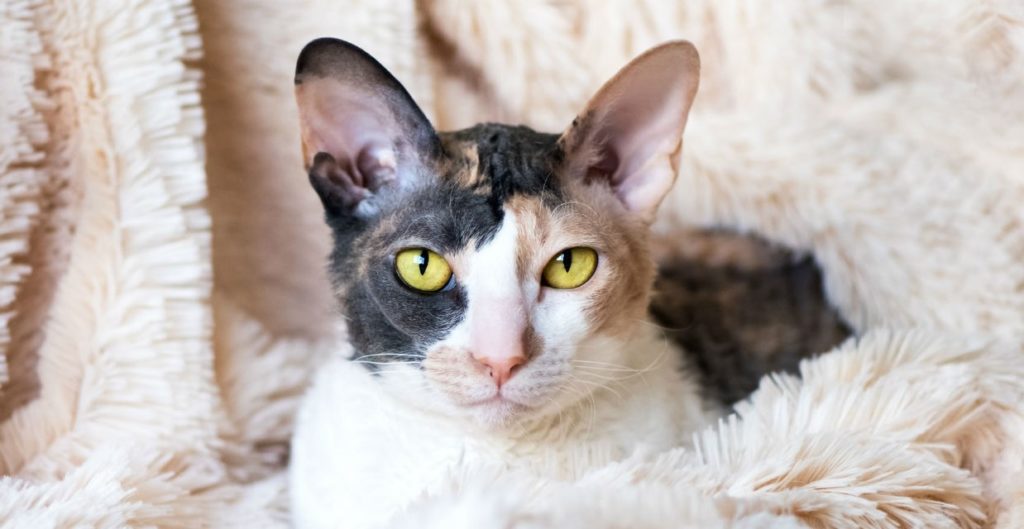 The Cornish Rex is a genetic mutation that originated from a litter of kittens born in the 1950s on a farm in Cornwall, UK (hence their name). One of the kittens, a cream-colored male named Kallibunker, had an extremely unusual, fine and curly coat; he was the first Cornish Rex. The owner then bred Kallibunker back to his mother to produce other curly-coated kittens. Cornish Rexes were later brought to America and crossed with Siamese, giving them their long whippy tails and big ears.

The Devon Rex is a very similar breed. Crosses between Devon and Cornish Rexes are not permitted in pedigrees and matings between them will not produce a cat with short wavy fur. Another hair-deficient breed is the Sphynx cat, which has no hair but may have a very light coat of fuzz.

Despite some belief to the contrary, the Cornish Rex’s short hair does not make it non- or hypo-allergenic. Most people who have cat allergies are allergic to cat dander and cat saliva.

Since Cornish Rex cats groom as much as or even more than ordinary cats, a Cornish Rex cat will still produce a reaction in people who are allergic to cats. However, because of the fine, light fur that is shed from these cats, people with only mild allergies may experience fewer symptoms with a Rex.

Using the word “Rex” to imply short or otherwise unusual fur originates from an occasion when King Albert I of Belgium (1875-1934) entered some short-haired rabbits in a rabbit show. They did not meet the breed standard, but the show’s officials did not wish to risk offending the king by rejecting them. Instead, they accepted them but wrote “Rex” (Latin for “king”) beside their names.