The Devon Rex is a relatively new breed of cat with a sparse, curly, very soft coat similar to that of the Cornish Rex. The Cornish Rex’s coat is unusual because only the down layer of hair is present, the other two layers are absent.

The curl in their fur is caused by a different mutation and gene than that of the Cornish Rex and German Rex, and breeding of a Devon to either of those cats results in cats without rexed (curled) fur. 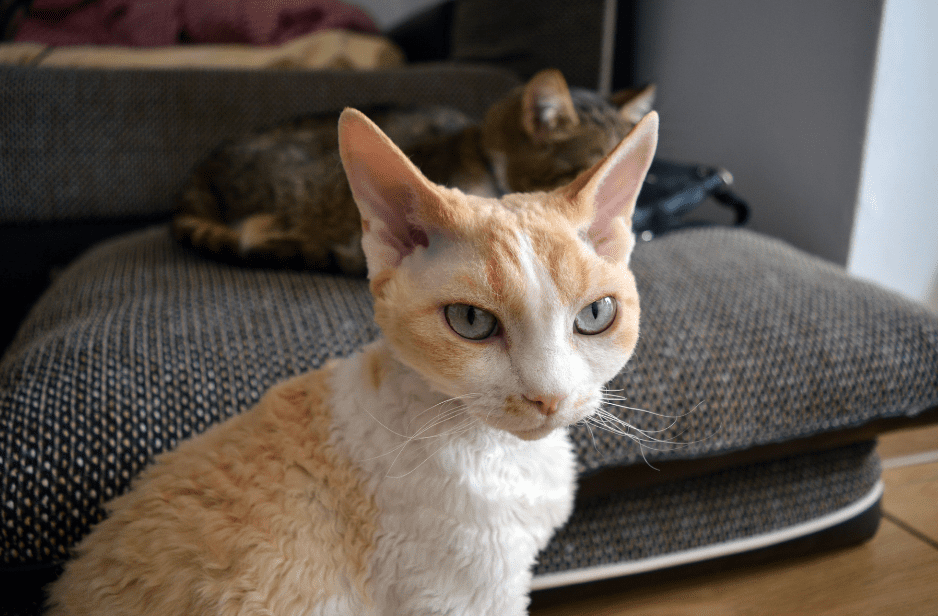 Devons, which are medium sized cats, are often called “pixie cats” or “alien cats” because of their unique appearance. Their uncommonly large ears are set low on the sides of their wide heads, their eyes are large, and their noses are slightly upturned. Their body type is distinctly lightly-built.

The typical Devon is active, mischievous, playful, and very people-oriented. They have been described as a cross between a cat, a dog and a monkey. They are high-jumpers and will try to occupy any space large enough to admit them. They’re relatively easy to take care of, but they do shed, and many of those with allergies have found that they are not always hypoallergenic.

In 1959, a Miss Cox of Devonshire England found that a stray cat in her care had given birth to a rather odd looking curly-haired kitten, the sire thought to be a curly-haired tomcat seen in the area. Delighted with the kitten’s elfin features and wavy curls, she named him Kirlee — the founding father of the unique and wonderful breed of cats known today as the Devon Rex. 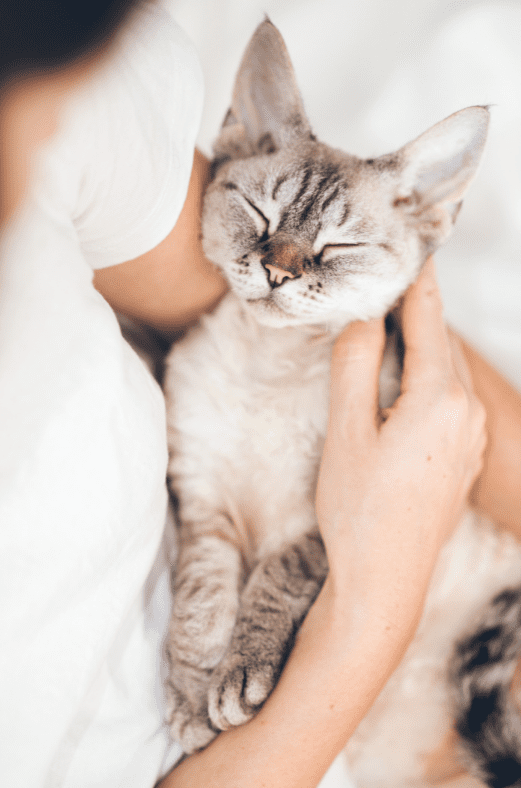 Today’s Devon Rex maintain a look true to their founder — huge ears, set low on the sides of the head frame, a pixie-like face with large, inquisitive eyes and a short slightly upturned nose. A coat of loose waves and curls covers a strong and supple body in a compact, refined form. These unusual features decorate a breed whose personality, intelligence, friendliness and inquisitive behavior are as unique as the package it comes in. A young breed, the Devon Rex is carefully crossbred to American and British Shorthairs in order to enlarge and strengthen the gene pool.

Nicely “mid-sized” cats, adult Devons average six to nine pounds, with males heavier than females. While an even, full coat of loose curls is ideal for the show ring, the Devon coat varies greatly between individuals, ranging from an almost shaggy mop of loose curls in some to a thin suede-like coat in others that may leave some areas nearly bare. The coat may vary over the life of the cat, with some kittens dropping much of their coat (“molting”) during their development, and some adult coats changing seasonally.

Even though their body temperature is the same as other cats, many Devons are surprisingly warm to the touch due to a lighter, less insulating coat. Not surprisingly, Devons tend to be “heat seekers,” and are often found lounging on televisions, computer monitors and heater vents. On chilly nights, Devons make superb bed warmers, often sneaking under the covers to stay warm and share body heat with their favorite people.

The Devon personality has been aptly described as a cross between a cat, a monkey, and “Dennis the Menace.” Devons are highly active, playful and involved with everything. Powerful jumpers, very few spots large enough to hold them will not be explored and occupied. Devons have been found climbing brick fireplaces and perching on top of doors. Although little escapes a Devon’s interest, they are very people-oriented. 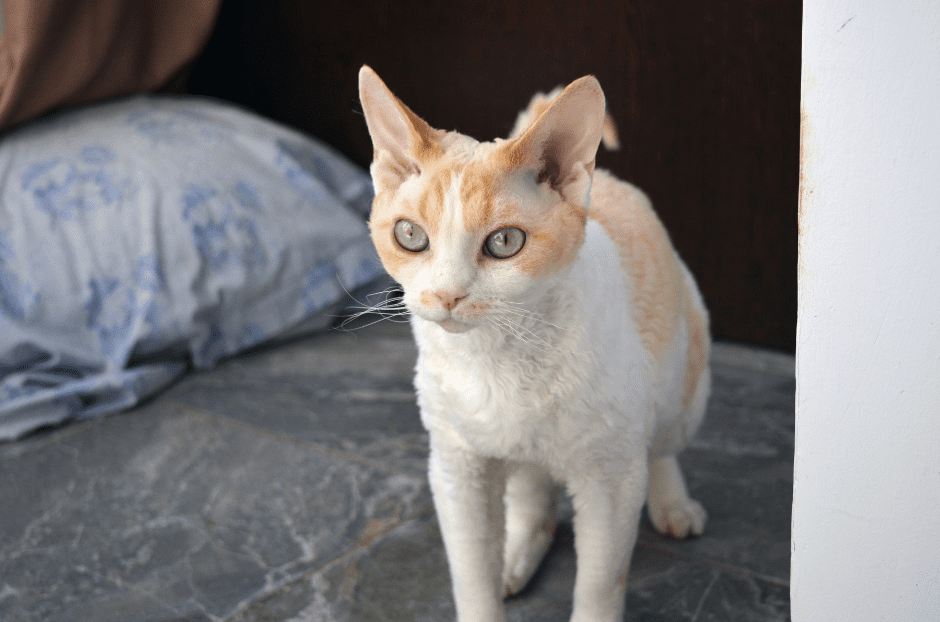 Most Devons invite themselves along for every activity — preferably perched on a shoulder, lap, or wherever they can be closest to their people. They are accomplished food mooches, with “anything they aren’t supposed to be into” only slightly less appealing than “anything you are eating.” Many a bag of snack food left unattended for an eyeblink has suddenly sprouted two legs and a tail, with a Devon contentedly grazing inside.

Devons are low maintenance, wash-and-wear companions. Their large ears occasionally require cleaning, but otherwise a quick shampoo and towel dry (or even a wipedown with a damp cloth) and a nail-trim is all the grooming most Devons require. Despite popular myth, Devons do shed (as does anything with hair), although their unique coat may make the shed hair less obtrusive than that of many cats. Devons have also gained a dubious reputation as being “hypo-allergenic,” but this varies according to an individual’s personal allergies. While some people with animal allergies tolerate Devons very well, anyone with allergy issues should arrange to handle a Devon before considering acquiring one.

After twelve weeks, kittens have had their basic inoculations and developed the physical and social stability needed for a new environment, showing, or being transported by air. Keeping such a rare treasure indoors, neutering or spaying and providing acceptable surfaces (e.g. scratching posts) for the natural behavior of scratching (CFA disapproves of declawing or tendonectomy surgery) are essential elements for maintaining a healthy, long and joyful life. Colors: a wide array of colors in the solid, shaded, smoke, tabby, bi-color, parti-color and pointed patterns.