They were bred from Siamese (for the markings) and Persians (for coat-length and temperament), and share characteristics of both breeds. Himalayans are now considered the same breed for cat registries (CFA), (TICA) as the modern Persian show cat since they have the exact same conformation with a pointed coat.

The body of a Himalyan is white, but the points come in many different colours: blue, brown, lilac, chocolate, flame, red and creme. The points can also be tabby or tortie patterned.

These cats are sweet-tempered, intelligent, social and good companions. Because of their heritage from the Siamese cats they tend to be more active than an ordinary Persians. Their coat needs daily attention and grooming, because, like many long-haired cats, they have an abundance of fur. 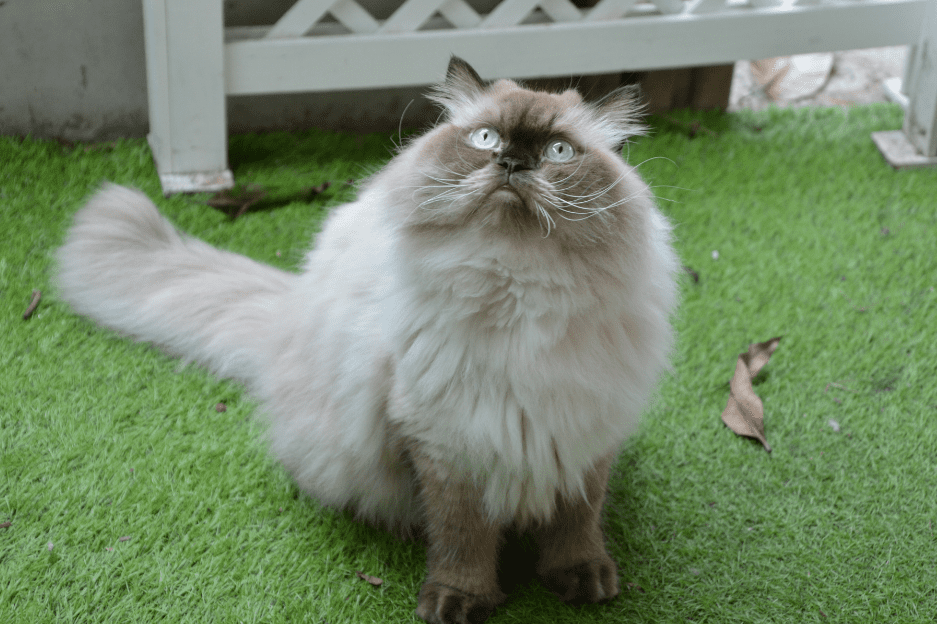 The Himalayan cat has become well-known in recent years with the movies Meet The Parents (2000) and Meet The Fockers (2004). The cat seen in the two movies was named Mr. Jinx. In the movies Homeward Bound: The Incredible Journey (1993) and Homeward Bound II: Lost in San Francisco (1996), one of the main characters is a Himalayan cat named Sassy (voiced by Sally Field).

Head: Round and massive with great breadth of skull. Round face with round underlying bone structure. Head well set on short, thick neck. Jaws broad and powerful, with cheeks full and prominent. In profile, forehead, nose and chin should appear to form a perpendicular line. Nose snub, as broad as it is long, and with a break. Break to be no higher than the middle of the eye. Top of nose leather no higher than the middle of the eye. Chin well developed. OBJECTION: Long, narrow head, long nose, thin muzzle or visible bite deformity.

Ears: Small, round-tipped, tilted forward and not unduly open at the base. Set far apart and low on the head fitting into, and without distorting the rounded contour of the head. OBJECTION: Ears large, pointed, set too close. 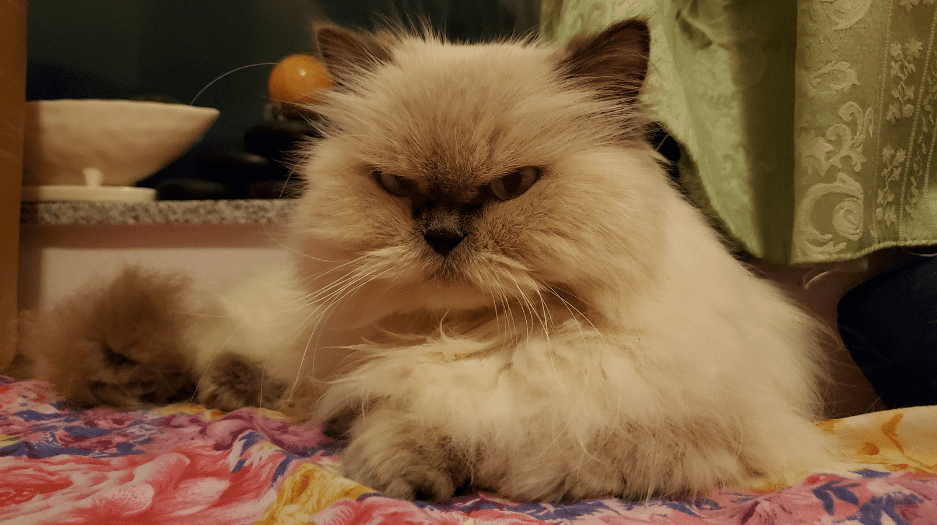 Body: Cobby in type – low on the legs, deep in the chest, equally massive across the shoulders and rump. Back level, short, rounded midsection. Medium to large in size. Quality and proportion the determining consideration.

Legs and Feet: legs should be short thick and heavily boned. Forelegs should slant inward very slightly from breadth of chest adding to a sturdy appearance. Feet should be large, round and firm with toes close together; five in front, four behind. OBJECTION: Light boning, long or bowed legs, small or oval feet.

Tail: Short, straight, but in proportion to the body. Carried without a curve and at an angle lower than the back. OBJECTION: Long tail.

Coat: Long and thick, standing off from the body. Of fine texture, glossy and full of life. Long all over the body, including the shoulders. Ruff immense and continuing in a deep frill between the front legs. Ear and toe tufts long. Tail full. Seasonal variations of the coat shall be recognized.

Condition and Balance: Firm in the flesh, but not fat; well-balanced physically and temperamentally, gentle and amenable to handling. Medium to large in size. Heavily boned, short-coupled, broad through the chest and rump with short, sturdy legs, giving the impression of robust power.

NFA: Eyes any other color than blue in pointeds, green in silver tabby and golden tabby non-pointeds; and copper in all other non-pointeds. Crossed eyes. Kinked tail or any tail abnormality. Lack of break. White toes or feet, locket or button. Incorrect number of toes. Apparent weakness in hindquarters. Deformity of skull and/or mouth.