The Manx is a breed of cat with a naturally occurring mutation of the spine. This mutation shortens the tail, resulting in a range of tail lengths from normal to tailless.

The hind legs are longer than the front legs, creating a continuous arch from shoulders to rump giving the cat a rounded appearance.

Manx cats move with more like a hop than a stride when running; in this aspect, they resemble rabbits more than cats.

Many Manx have a small ‘stub’ of a tail, but Manx cats are best known as being entirely tailless: it is the distinguishing characteristic of the breed 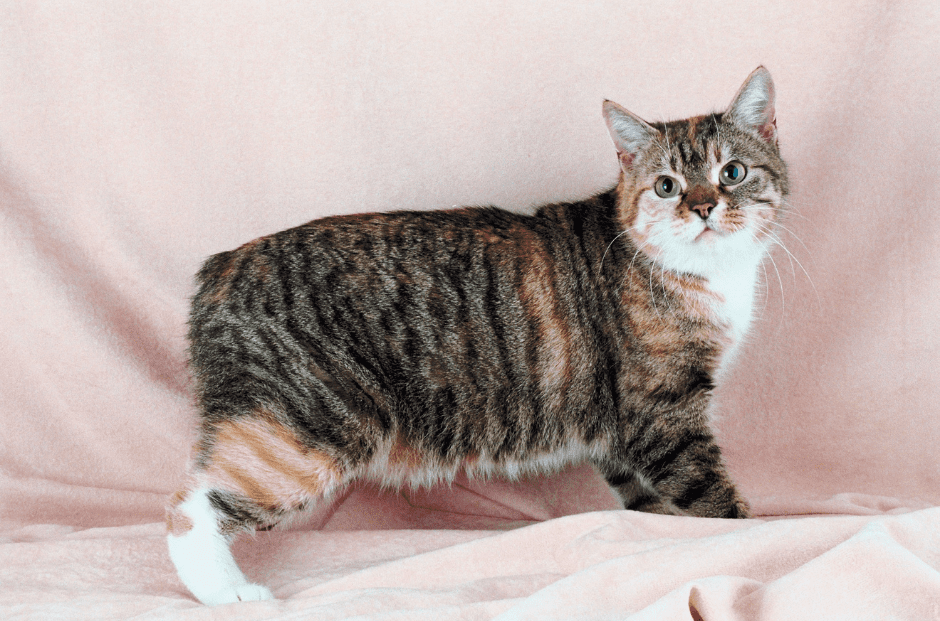 The Manx breed originated on the Isle of Man, hence their name. It is called kayt Manninagh in the Manx language. They are an old breed, and tailless cats were common on the island as long as two or three hundred years ago.

It is unknown exactly how the mutation originated, but one legend states that it was the result of cats surviving a shipwreck centuries ago. Legends even claim that Noah caused the breed to be tailless by closing the door to the ark as the Manx was entering, cutting off the tail.

Other legends allege that cats and rabbits mated, and their offspring became the Manx cat; the reasoning behind this is the fact that Manx usually do not have tails, and have longer hind legs, which gives them a similar appearance to rabbits, especially when running. This was further reinforced by the Cabbit myth.

The most probable scientific explanation of this breed’s existence is that once the dominant mutant tailless gene was introduced to the island, it became common and concentrated in the genetically isolated population. This resulted in the “normal” cat on the island having a short or nonexistent tail. 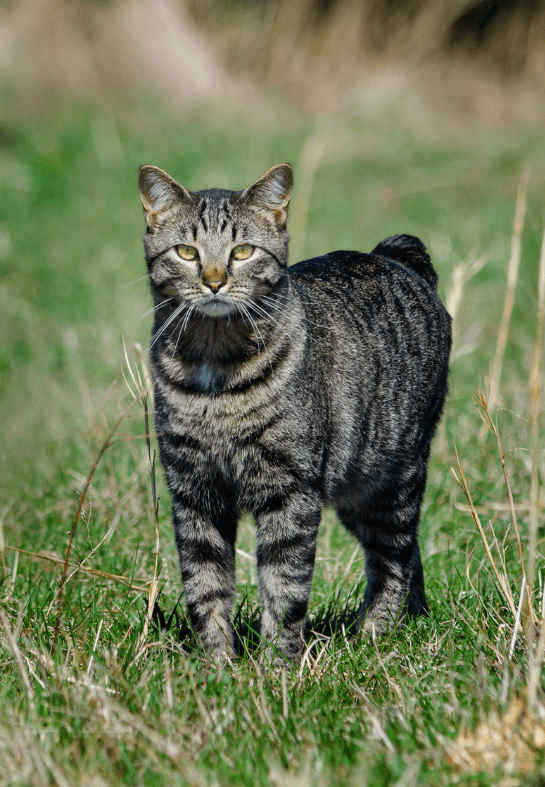 It is possible that excessive inbreeding can result in short tails, however, the Manx breed has its shortened tail due to a mutation in the tailless gene, which is dominant and inheritable regardless of the inbreeding coefficient of a particular cat.

This gene, like many others, also occurs in the domestic cat population and in fact was probably transferred from the Isle of Man to it.

For a cat to be considered a Manx, registering bodies (CFA, TICA, GCCF etc..) require that the cat show ancestry from the Isle of Man in an unbroken line of succession.

Many of the distinguishing characteristics of cat breeds occur naturally sometimes in the domestic population. As much as cat resembles a certain breed, they are considered domestic cats unless the ancestry has been tracked through a pedigree.

This is the same in pedigreed dogs. Thus a random bred cat lacking a tail is a domestic tailless, but not a Manx.

The Manx tailless gene is dominant and highly penetrant; kittens from Manx parents are generally born without any tail.

There is no proven ratio of the amount of tailed to tailless kittens produced in each litter. However, tailed Manx bred to tailed Manx normally results in all tailed kittens, even though there are exceptions.

Manx kittens are classified according to tail length:

Breeders have reported all tail lengths within the same litter.

The ideal show Manx is the rumpy. The stumpy and tailed Manx do not qualify to be shown. Depending on the presence of the mutant gene, their kittens may or may not be tailed.

In the past, kittens with stubby or full tails have been docked at birth as a preventative measure due to some partial tails being very prone to a form of arthritis that causes the cat severe pain.

However, tailed Manx cats have been born for hundreds of years on the Isle of Man with no known documented problems. Most countries today have banned alteration of animals for cosmetic appearances.

Some United States breeders still practice the docking Manx kittens tails as a rule. This practice is declining as other Manx breeders educate people that this breed can have a partial to full tail with no ill effects, and yet still be a Manx cat.

Docking tails on cats is not exclusively performed on the Manx breed; it can be performed on any cat breed for medical necessity.

The mutation that causes a Manx cat to be born without a tail does not occur in every Manx kitten — not all Manx cats lack a tail.

However, since they carry Manx genetics, their kittens or descendants can be born without a tail even if their parents had tails. Some stumpy Manx are born with kinked tails because of incomplete development of the tail during the fetal stage.

This is somewhat rare though, as other tail lengths (or lack thereof), as well as straight-tailed stumpy tails are much more common. 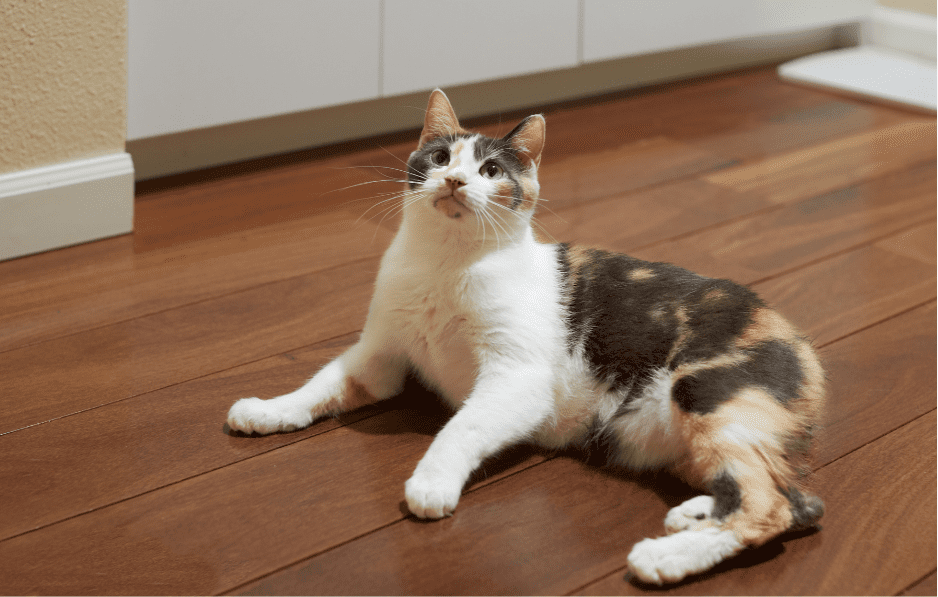 Pedigreed Manx cats today are much healthier and have fewer health issues related to their genetics than the Manx of years ago. This is due in part to the careful selection of breeding stock, and knowledgeable, dedicated breeders. Manx have been known to live into their mid- to high-teens and are no less healthy than other cat breeds. Like any other cat, keeping Manx cats indoors, neutering or spaying, and providing acceptable surfaces for the cat’s normal scratching behavior are vital to lengthen the life of any cat.

Manx Syndrome is a colloquial name given to the condition which results when the mutant tailless gene responsible for shortening the cats’ spine has an excessive negative effect. It can seriously damage the spinal cord and the nerves. The cat can have problems with spina bifida, bowels, bladder, and digestion as a result. Actual occurrences of this are rare in modern examples of the breed due to informed breeding practices.  Most pedigreed cats are not placed until four months of age to make sure that proper socialisation has occurred. This gives adequate time for any mutant gene-related health issues to be seen, as they turn up early in the cat’s life.

According to Robinson’s Genetics for Cat Breeders and Veterinarians, both the Manx tailless gene and the Scottish Fold fold-eared gene are potential lethal genes in utero if extreme tailless to tailless are mated or if extreme fold-eared to fold-eared are mated. Problems are most likely to occur when two completely tailless Manx are bred together. For this reason, responsible breeders generally breed a ‘stumpy’ or fully-tailed Manx with a ‘rumpy’ or ‘rumpy riser’ to minimise the chances of serious defects. This breeding practice is responsible for the decreasing occurrence of spinal problems in recent years.

The Manx breed is a highly intelligent cat breed, it is playful, and in its behaviour, bizarre, but very reminiscent of dogs; for example, some Manx cats will fetch small objects that are thrown. It is considered a social feline, and the breed loves humans. This attribute makes them an ideal breed for families with young children and people who prefer a companion. Some members of this breed tend to like water, many times even playing with it.

This trait makes it very easy to give some Manx cats a shower for hygiene purposes, unlike most other cats. Although not as trainable as dogs, Manx cats can learn simple commands, such as No. Other cat breeds that share similar personality traits are Bengal and Ocicat. If there are multiple Manx cats in a household, an owner might notice that they chase each other frequently.

This is common behaviour for Manx cats; they like to chase anything, be it an animal or leaf caught in the wind. Their ‘meow’ often resembles a long, monotone grunt or rapid chirping. However, Manx cats usually are very quiet.