The breed is a very old one which occurred as a natural adaptation to the cold climate of the region, but it was not regarded as anything other than a standard house-cat until the late 1930s, when a small number of ‘Skaukatts’ were shown in Germany and received very favourably by the judges.

World War II brought an abrupt end to the fledgling Norwegian show cat industry, and the breed was forgotten until the 1970s.

The cats are now being bred and shown in several countries including the United States. The first international association to accept the breed was FIFe, in 1977. They are rumoured to be the early ancestors of the Maine Coon and the long-haired Manx. 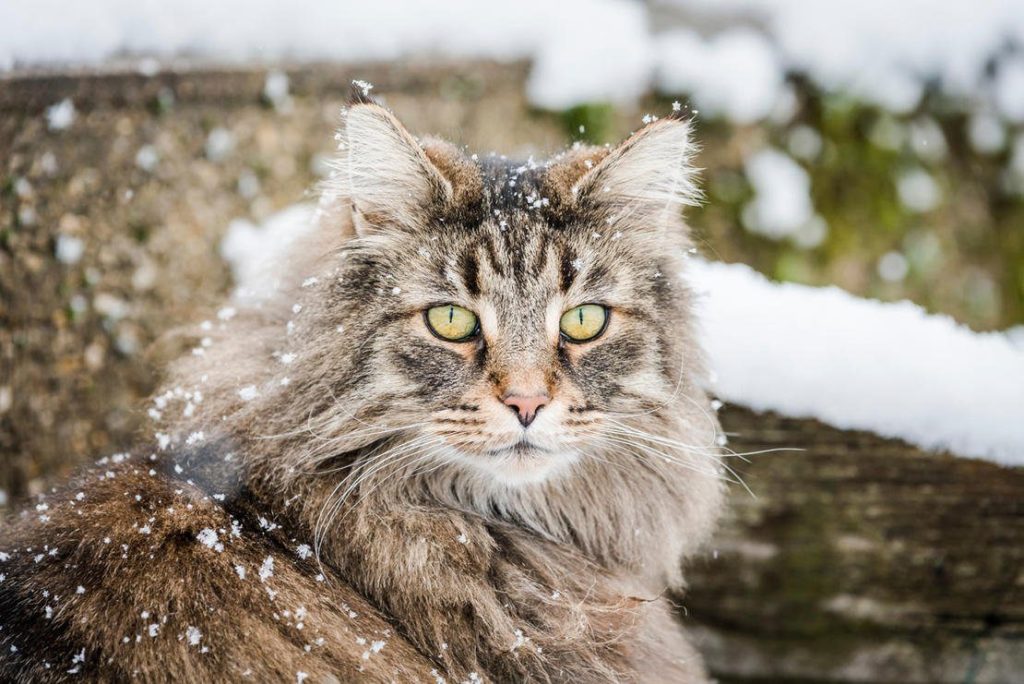 Norwegian Forest Cats have a thick fluffy double-layered coat, tufted ears and a long bushy tail to protect them against the cold. Their coat is essentially waterproof due to its coarse outer layer and dense underlay. They are very large cats with adult males weighing 6 to 10 kg (13 to 22 lb), while females are approximately half that size. Their hind legs are longer than their front legs. They are intelligent, playful cats that enjoy human company. The nickname of “Wegie” began in the United States and is a shortened version of the word Norwegian.

Like Maine Coons, Norwegian Forest Cats are an intelligent, robust and playful breed. They like the outdoors, are well suited to cold conditions and are great hunters. Despite their great affection for the outdoors however, they enjoy the company of humans and other pets and will sometimes go looking for company if their owner is out. They are not easily stressed and are quite patient, which makes them great for a family with children. They enjoy high vantage points and enjoy tree-climbing.

WHAT ARE NORWEGIAN FOREST CATS?

These are really the gentle giants of cats, with wonderful easy-going natures and a devotion to those who share their lives, be it other cats or humans. A semi-long haired, natural breed, they are mentioned in Norwegian folk tales, but only became established as a breed in the 1930’s, when they were regarded as a separate breed in their native land.

Due to World War 2, interest in developing the breed fell off, and only in the 1970’s, when threatened with extinction, was a proper breeding programme established by devoted fans of this creature in Norway where its called the skogkatt (translates as “forest cat”). Here, in the UK, it took until 1997 for recognition to be gained for the breed by the Governing Council of the Cat Fancy (GCCF), with full championship status on the show bench under this governing body. Many of the pedigree papers of these cats show foundation stock as recently as 4 or 5 generations back. This is still a relatively new breed. Look here for more info.

Norwegian Forest Cats (NFC’s) are a large breed of cat with weights of full grown males averaging around 7-8kgs , with females weighing a little less at 4-5kgs. As a slow-maturing breed they may take 3-4 years to ‘fill out’. They are semi-long haired, with a double coat. This comprises a woolly undercoat, topped with longer waterproof guard hairs. this helps insulate them in their natural environment, keeping them warm and dry in the snow of Norway.

They also have hairy tufts between their toes (to protect feet from the cold) and well-furnished ears with ‘lynx like’ tufts. In summer, the cat loses a lot of the bulk of its winter coat in a seasonal moult. They are a strong boned cat with a distinctive triangular head, with the ears following the line of the triangle from the chin. In profile, they have a straight appearance, with no nose break, and are very distinctive. The eyes should be slightly almond shaped, and angled up to the base of the ear. Altogether, the Norwegian Forest Cat is a very handsome animal. Click here for full breed standard.

WHAT SORT OF TEMPERAMENT DOES THE NORWEGIAN FOREST CAT HAVE?