The Ocicat is a new and still-rare breed of cat which has spots resembling a ‘wild’ cat and the temperament of a domestic animal, named for its resemblance to the ocelot.

Despite its appearance, there is no ‘wild’ DNA in the Ocicat’s genepool. The species is actually a mixture of Siamese and Abyssinian, and later American Shorthairs (silver tabbies) were added to the mix for their silver colour and distinct markings. 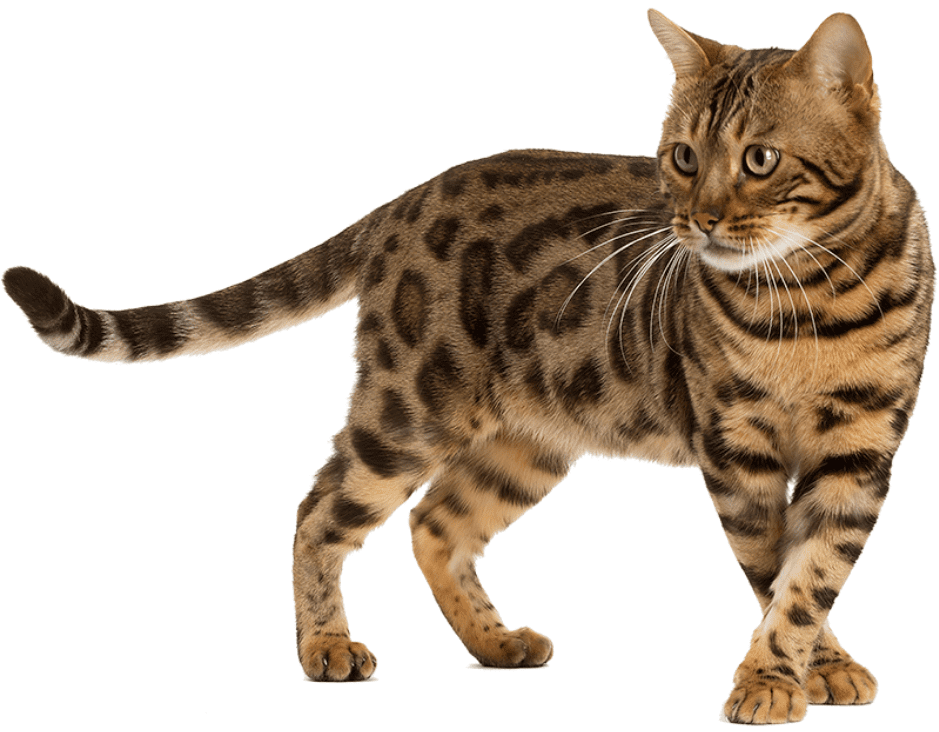 The first breeder of Ocicats was Virginia Daly, of Berkley, Michigan, who attempted to breed an Abyssinian-pointed Siamese in 1964. The first generation of kittens appeared Abyssinian, but the surprising result in the second generation was a spotted kitten, Tonga, nicknamed an ‘ocicat’ by the breeder’s daughter. Tonga was neutered and sold as a pet, but further breedings of his parents produced more spotted kittens, and became the base of a separate Ocicat breeding program.

There are twelve separate colour/pattern combinations registered for ocicats, and these fall into five larger groups – chocolate, cinnamon, tawny, silver and fawn(dilute). Ocicats must not have cream/red coloration or they are disqualified from showing.

The Ocicat is an agouti spotted cat of moderate type. Originating from interbreeding of Abyssinian, Siamese and American Shorthair, it is the only spotted domestic breed selectively bred to emulate the cats of the wild.

The ideal example is a large, active animal with an athletic appearance. It is very solid and well-muscled and has a short, tight coat with a satin sheen that shows off muscles and spots to their best advantage.

In 1964 the original Ocicat was the unexpected result of an experimental breeding which attempted to produce an Aby-point Siamese. Virginia Daly, noted CFA breeder living in Michigan, knew the possibility of getting the sought after Aby-point and was willing to invest the time she knew it would take to breed the two generations that were necessary. But the ivory kitten with golden spots was a surprise! Mrs. Daly’s daughter named the breed the Ocicat, because of its resemblance to the ocelot. Tonga, the first Ocicat, was neutered and sold as a pet.

When the Detroit newspaper publicized the lovely spotted cat and when noted geneticist, Dr. Clyde Keeler, expressed his desire to see a domestic cat which would mimic some of the vanishing wild species, the breeding was repeated to produce more Ocicats. Other breeders followed Mrs. Daly’s recipe to develop other Ocicat lines with a broad genetic base.

The Ocicat was recognized for CFA registration in 1966, but it took another twenty years to develop the breed and gain the support for provisional status. The Ocicat was advanced to championship status May 1987. They can now be seen at many shows, and a few cats have been exported to other countries where their popularity is increasing.

Feline enthusiasts have always been awed by the spotted cats of the wild: ocelots, margays, leopards and others. Never before was there such an effort to breed an entirely domestic cat which can offer the spotted beauty of the wild cats, while maintaining the lovely, predictable disposition of the domestic cat. With so many wild spotteds disappearing as their native habitats are destroyed and invaded, it is increasingly important that this man-made breed can satisfy people who want something ‘’exotic.” How sad that so many wild spotted cats have suffered abuse and destruction. Perhaps the Ocicat will do its part in preventing the poaching and importation of the endangered wild cats. 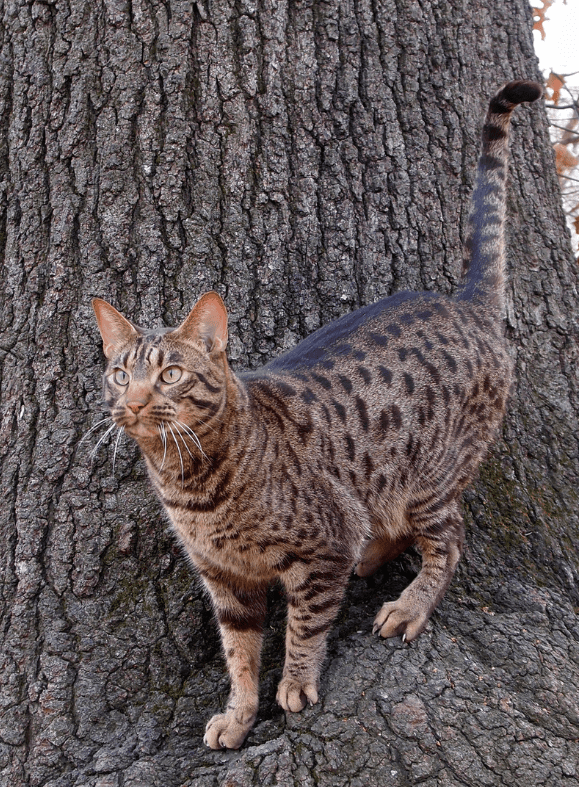 While the Ocicat looks wild, its temperament is anything but ferocious. It is a lot like a dog in that it is absolutely devoted to its people. The Ocicat is not a demanding, clinging-vine type, but is confident as well as dedicated to its owners. Most Ocicats are also quite extroverted around strangers, not at all bashful about checking out the possibilities for a few playmates or a lap to curl up on when visitors come to call.

Ocicats are quite bright and easily trained. Many will fetch, walk on a leash, respond to voice commands and readily adapt to household rules. Because of their adaptability, they are a joy to work with and easily get used to traveling. Their sociable nature may make them less suited than some other breeds to being left alone for long periods of time, but it does make them a good choice for a household already blessed with other cats or dogs.

Though Ocicats fill the need for the exotic, they are easy to keep and require no special care. Their diets are the same as any domestic and their short coats need only the occasional bathing and grooming. They are not prone to any particular health problem and their broad genetic background gives them vigor and vitality. 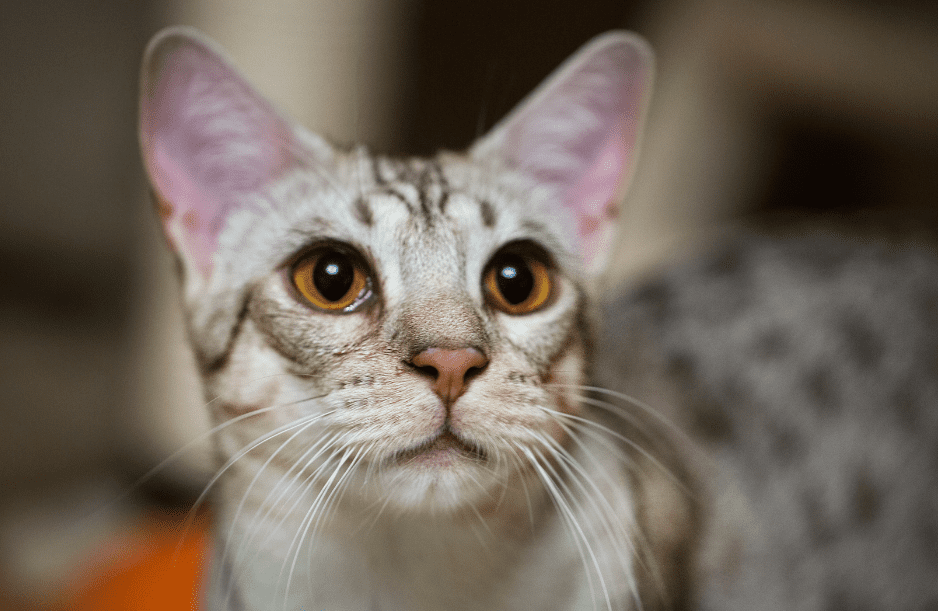 There has been tremendous controversy about the genetics of inheritance associated with the spotted pattern. In the earlier days of the cat fancy, when life was simpler, all patterned cats were believed to display one of the three tabby patterns: ticked (Aby), mackerel (tiger striped), or classic (blotched or bull’s eye). The spotted pattern of the Ocicat, at least on the better examples of the breed, is notedly different from other spotted breeds or varieties. While some believe this comes from a different gene altogether, there is no conclusive evidence and it might be that selective breeding is responsible for the Ocicat’s lovely pattern.

After twelve weeks, kittens have had their basic inoculations and developed the physical and social stability needed for a new environment, showing, or being transported by air. Keeping such a rare treasure indoors, neutering or spaying and providing acceptable surfaces (e.g. scratching posts) for the natural behavior of scratching (CFA disapproves of declawing or tendonectomy surgery) are essential elements for maintaining a healthy, long and joyful life.